Sadness is here to stay. He brought two suitcases this time, old and beaten up and wrapped with string. He said everything he owned was in them. I didn’t know what to say. Coffee? I offered. Tea? He said, The fewer possessions you have, the easier it is to keep moving. I told him I wasn’t in the mood for his goddamn philosophy. I told him there were extra sheets and towels in the linen closet. You’re angry with me, he said. You’re angry I came. I just shook my head. There was no use telling him what I felt. I’d start talking, and it would remind him of something that had happened when I was a boy, and soon he’d be crying. He’d pull out his handkerchief and wipe his tears and offer the handkerchief to me — as if sitting here, weeping about the past, was something I had time for. Didn’t he know how much work I had to do? Didn’t he know how important I’d become? Him and his miserable suitcases. Last time, he brought only one.

I’m connected right now to everyone who is reading this — more connected, probably, than if we were in the same room. Yet I take the appearance of my aloneness as the deeper reality, imagine myself cut off, isolated. It’s true that I’m the only person in this room, but I’m alone only if I ignore all the other people in all the other rooms, just because I can’t see them, hear them, touch them. Connectedness is a fact I deny with my ideology of loneliness.

Carolynn is dead. She was alive, and now she’s dead. This was hardly unexpected, yet I feel numb. She was a friend here among the living, our temporary home. Her death stuns me because it reminds me just how temporary an address this is. Yes, I have a body, a personality. But when the landlord sends the eviction notice, that’s it. Sooner or later, the letter arrives — and it’s always too soon. Too soon for Carolynn. Too soon for her sister, killed in a car crash. Too soon for the thousands of children who die each day of starvation and disease. Too soon for the rich man’s son who dies mysteriously in his expensive crib. Yes, it seems horribly unfair. Life is unfair; death is unfair. But what gives me the idea that it should be different?

I filled the world with my lament, but the world had broken better men than me. My sins were of the lesser variety. I ate too much and talked too much and played too much with my golden zipper. I didn’t stay in touch with old friends. I didn’t pray every day for the poor. The world was used to this, and signed off on my paperwork with a distracted air, too busy even to notice my confession.

My fear of death wants to make Carolynn a martyr. But I don’t want her to use her that way: as one more lurid advertisement for a gospel of betrayal. Her short life, her painful death — how tempting to see her as a victim, and thereby reinforce my sense of separateness. My fear says, We’re all victims here. My fear says, Listen to the voice of fear. Memorize its every word and, in your heart of hearts, worship at its altar. Fear is nearby. God seems impossibly distant. Fear comforts me in a voice that’s so familiar. God’s voice comes to me as the barest whisper. I’m rarely quiet enough to hear it.

Another misunderstanding with Norma — over nothing. Is it any wonder the world is filled with strife? All over the world, people hate each other, kill each other — over nothing. We’re all going to die eventually, but that gets forgotten. Norma and I forget it. The Serbs and the ethnic Albanians forget it, and the Israelis and the Arabs, and the Moslems and the Hindus. We’re all married to each other, but instead of shining out radiant love toward one another we sulk, we grumble, we argue, we turn away. I say we, but I mean me. I’m the world at war.

I pay too much attention to what I’m thinking and feeling, not enough attention to who I really am. My busy mind loves to keep busy, just as a child loves to play. There’s nothing wrong with being a child, but there comes a time to lay aside childish things. I love the games I played as a child. I love what they taught me. But would I now choose to devote all day to playing Monopoly or Scrabble or Prince Valiant? Yet I choose to spend all day playing Sy Safransky. I’ve learned most of the rules; I’m an experienced player. It’s so tempting to set up the pieces again and again.

Maybe God has never been as far away as I’ve thought. I can’t say what God is. But when I stop pretending that I know who I am, God is here. When I stop insisting on my version of the truth, something reaches out for me: truer than any words, more luminous than any philosophy. This is something I’ve experienced, though I can’t prove it. I can only honor or dishonor it by how I live. 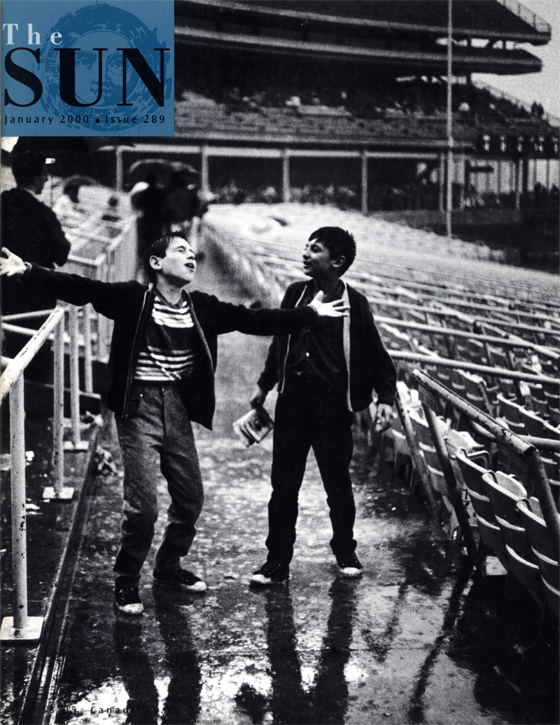