I turned off the radio. I didn’t want to hear more about the war in Chechnya, about the man who lost his wife and son. I didn’t want to think about the wars to come. The full moon had something to say to me, but I didn’t want to listen. I didn’t want to be reminded we’re as far from the moon as we’ve ever been. Here I am, living in the year 2000, yet how utterly familiar everything seems. Maybe this is the surprise the future had in store for us: Some of us have food in our bellies and some of us don’t. The seven deadly sins are no less deadly. The snow that fell last week is finally melting. How white it was.

The yoga teacher demonstrates a posture. I look at her incredulously, knowing I’ll never be able to bend that way. I’m too old for this, I think. It’s as hard as learning how to read, as hard as being led step by step through the alphabet, studying the mountains and valleys of this word and that word, a solitary traveler slowly moving his index finger across the page. I stop and start, stop and start, encouraged by the teacher to keep going, to cover the inconceivable distance from the beginning of the sentence to the end. I look at her and smile, shake my head doubtfully. “Don’t give up,” she says.

I worked hard last week, but tell myself I could have worked harder. I tell myself I ate too much, talked too much, spent too much time polishing the chrome fenders of desire. This scolding voice isn’t a loving voice, nor is it particularly insightful. It jabs at me like a schoolyard bully who knows how to make me feel vulnerable. Can I say no to the bully? Yes, I ate too much. Sometimes I do that. But why condemn myself? Being strong has less to do with not overeating than with not letting the bully push me around.

I’m like a man with his eyes shut tight who insists that seeing is impossible, who insists that blindness is the best he can hope for, who will not open his eyes. What a miracle that would be: to see God with the eyes God gave me.

Yesterday I said something scornful about my mother, then remembered it was the sixth anniversary of her death. I felt sad that I’d soiled the air with my words, sad that I was still complaining about this woman who tried her best to be a loving mother. She wasn’t perfect. Neither am I. She could be blind to the consequences of her actions. So can I. She wasn’t better than me or worse than me. If blacks can forgive whites, if Jews can forgive Germans, surely I can forgive this woman whose life was harder than mine, whose own mother died when she was still a teenager, who never had the benefit of a college education or an understanding therapist. How much longer shall I complain about my childhood? Yes, it rained a lot. Yes, I got wet.

Too much food. Too much conversation. Why does dinner with friends always turn into too much of a good thing? Why do I insist on finishing everything on my plate, as if finishing could happen in only one way? I read yesterday about a tornado that killed dozens of people in Oklahoma. Sometimes we’re finished when we’re only half finished. Sometimes we’re finished when we’ve only just gotten started.

When I’ve fallen under the spell, when I’m convinced that God doesn’t exist, that love is an illusion, how do I remind myself I’m profoundly mistaken — not just a little wrong, but as wrong as I can be? As wrong as Rush Limbaugh. As wrong as the Nazis and the Ku Klux Klan.

In Toronto this morning, I walked for hours. I saw a black squirrel. Yes, there are black squirrels in Toronto! When I walked past the Hospital for Sick Children, I prayed for the children, and for their parents and grandparents, and for their brothers and sisters. My legs were tired, but I kept walking. I made up songs and sang them. I remembered how much I like to walk and sing. Now I’m back in my hotel room. The old loneliness sits in the corner. He’s not walking. He’s not singing. He doesn’t believe in prayer. What’s the use? he says. But there are black squirrels in Toronto. He never told me that.

I’d like to raise an issue of inconsistency that may have slipped your notice. In his “Notebook” [April 2000], Sy Safransky writes: “If blacks can forgive whites, if Jews can forgive Germans, surely I can forgive this woman whose life was harder than mine.” If a word is being used as a proper noun or proper adjective — like “blacks” is above — then it should be capitalized.

When I entered Cornell University in the fall of 1965, I was a Negro. Before my graduation, we Black students won a struggle to establish an Afro-American-studies program. We were not all “black” of course, but varied in hue. Unarmed, we seized Willard Straight Hall and vowed to defend ourselves if necessary. Through our actions, we achieved part of what Stokely Carmichael and Charles V. Hamilton called for in Black Power — the right to define ourselves.

I am not “black” in the way Safransky uses the word when he writes: “In Toronto this morning, I walked for hours. I saw a black squirrel. Yes, there are black squirrels in Toronto!”

All Blacks are not black.

Sy Safransky’s Notebook in the April 2000 issue was thoughtful and deeply personal, good for my heart and spirit. I disagree, however, with his putting Rush Limbaugh in the same category as the Nazis and the Ku Klux Klan. Limbaugh has never killed anyone, never organized anyone for violent purposes, and, to a fault, he stands up for the American promise of freedom for all — and its concurrent demand for personal responsibility.

My guess is that Safransky is among the many liberal critics of Limbaugh who have never listened to his show. Contrary to the mainstream media’s characterization of them, most of his listeners seem to be good folks with a conservative point of view who enjoy Limbaugh’s intelligence, opinions, and entertaining approach to current events.

I personally have a problem with those moments when Limbaugh lapses into what could only be described as meanness. Given the thousands of hours he is on the air, however, those moments are thankfully rare. And I’ve never heard him be as mean as, for example, James Carville when he savagely attacks Bill Clinton’s critics. I believe Safransky would be surprised and delighted to hear how often Limbaugh challenges his own generally conservative listeners if they call in with poorly reasoned opinions and judgments. He forces them to think.

I read The Sun for the pleasure of the occasionally great writing, for perspectives that inform, inspire and even irritate me, and for a window into lives that differ from my own. I don’t expect to find cheap shots and unfair personal attacks on someone’s character.

Robert White Aspen, Colorado
More Letters
Thinking About Writing Us a Letter? Give in to the temptation. We love getting mail. Write us a letter! 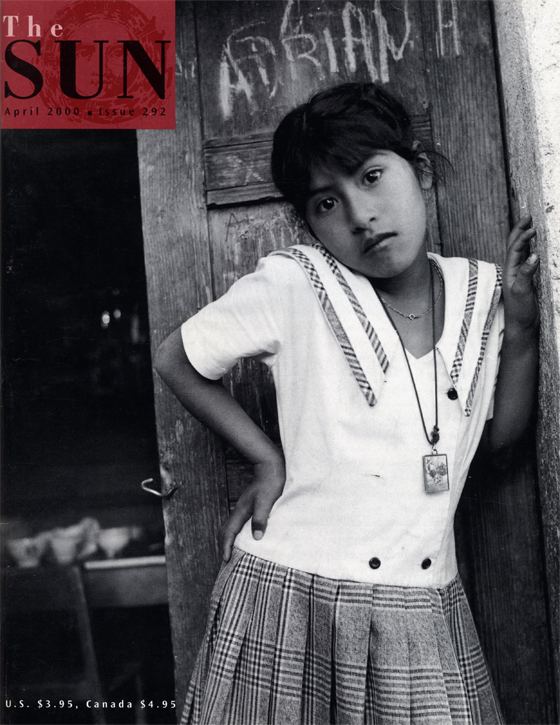 Sitting In The Dark

A Life Without Consequences