Each person requires a certain minimum amount of food, shelter, clothing, and fuel. The more people we have, the more natural resources we use. Extracting resources damages the environment, and there is a limit to the amount of damage the earth can sustain. We may, in fact, have already exceeded that limit. As Kathleen Dean Moore says [“A Weakened World Cannot Forgive Us,” March 2001 ], “When the earth is whole, it is resilient. But when it is damaged too severely, its power to heal itself seeps away.” Let us hope it is not too late.

All environmental problems — including species extinction, oil spills, urban sprawl, water shortages, air and water pollution, waste disposal, global warming, and even road rage — can eventually be traced back to too many people wanting and needing too many things. It will not do to speak of conservation and fuel efficiency as if these alone will save the planet. They are, at best, only stopgap measures. We must limit the number of children we bring into the world.

In the July 2001 Correspondence, Maureen Parker writes that “overpopulation is the root of all the environmental degradation on earth.”

In fact, no direct relationship between population and environmental degradation can be found. Demography indicates that poverty and economic instability are among the main factors leading to overpopulation, whereas the rich nations with strong consumer-based economies are the ones polluting the environment the most. The United States, for example, with only some 4 percent of the world’s population, produces about 25 percent of global carbon emissions.

In contrast to Parker, I find that environmentalists tend to overemphasize the importance of population. In my environmental-economics classes, I teach what I call “the four Cs”: carbon, chlorine, cars, and cattle. Were we to eliminate, or even dramatically reduce, our use of these four technologies, we’d buy ourselves much space and time in which to make the larger social changes that are ultimately necessary to develop an ecologically sustainable civilization.

I agree completely with Stephanie Mills [“The One Who Steals the Fat,” January 2001] that if humanity doesn’t reduce its impact on the earth, we may eventually cause our own extinction. I’ve often thought that we should add humanity to the endangered species list — not because there are too few of us, but because there are too many.

We must also deal, though, with the consequences of trying to reduce consumerism. I work for a company that sells stationery and greeting cards. Our products are a perfect example of items that people could easily do without. If this company went out of business tomorrow, it would be a good thing for the planet. Yet several hundred people work for this company, and many others earn their livelihoods supplying raw materials and services to it. Reduce consumerism enough, and you make it impossible for a great many people to put food on their tables and a roof over their heads.

We have built an enormous house of cards that grows larger every day. We face chaos and misery if we do not dismantle it, but we must begin the process carefully and thoughtfully.

Thank you for Stephanie Mill’s excellent essay “The One Who Steals the Fat.” It was a relief to read a piece about consumerism that takes a more moderate stance than those you often publish. Most of your articles on environmental subjects leave me gasping, “But that’s not the whole story!”

I’m a sixty-two-year-old retired woman who enjoyed a career in business. Despite a serious health problem, I manage to live alone in a harsh northern climate. Granted, this security is not available to everyone, but it wouldn’t be possible at all without those items your writers are so quick to put down: cars, pharmaceuticals, computers, phones. I shudder to consider what my life would be like if their wishes were suddenly granted and we went back to living the way people did in my grandmother’s day.

Taking away our gadgets and sending us back to cabins on the hillside isn’t the answer. The simple fact is, there are many millions of us, and we have to live somewhere, so we are going to use more land and resources. If we’d stop all the complaining about our neighbors’ shocking habits of consumption (never our own, of course), maybe we could redirect that energy toward finding moderate, sensible solutions that work for everyone.

When tempers cool and the public has been awakened, some reasonable person somewhere will find the cure. We can hasten this eventuality by not taking extreme opinions that alienate others and stall the debate.

Pat Nasser Grand Rapids, Michigan
More Letters
Thank You Your donations helped to keep our ad-free, nonprofit magazine in circulation last year, funding everything from production to distribution. Learn how you made a difference last year. Learn More 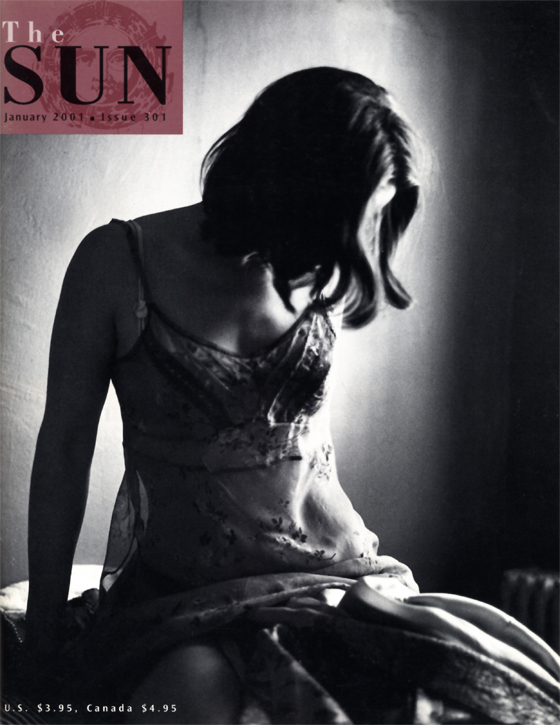 By Ellen Bass
The Sun Interview

The Story Behind Dr. Bronner’s Soap — An Interview With Ralph Bronner

The Year In Geese