I don’t have an American flag on my car or my front door. But I’m more of a patriot than Attorney General John Ashcroft, who studies the U.S. constitution as if it were a menu in a fashionable Washington, D.C., restaurant from which he’s free to pick and choose. Is it an exaggeration to call him a terrorist? Dismantling the Bill of Rights is less dramatic than smashing a plane into a building, but perhaps no less a threat to democracy.

Everything is uncertain now; terrorism is a fact of life. But everything has always been uncertain. Could Osama bin Laden have dreamt up anything more terrifying than the truth of human existence, which is that we’re all going to die one day? That’s right: This form will be no more. The “I” who thinks this and the hand that writes it — gone. The man I’ve struggled all my life to figure out will have ended his struggle. Just what was the problem, anyway?

I brooded all night about a comment Norma made, then curled up on my side of the bed, making sure our bodies didn’t touch. This morning, I still feel angry. But why? I may as well blame the rain for falling, as if God owed me a sunny day. Let me get out the contract and take a look. Did God keep all his promises? Exactly which promises did I expect God to keep? And just what was I promised about this marriage? That it wouldn’t rain? That I wouldn’t get wet?

The basic illusion is that we’re separate — that there is a Norma, that there is a Sy. But, to quote our former president, that all depends on what the meaning of the word is is.

Norma and I celebrate another anniversary, still in love despite our astonishing differences. Sometimes we’re as different as night and day. Other times, the clock strikes high noon for both of us, and for a glorious few hours we’re perfectly synchronized, as impressive as a Swiss watch, and a lot sexier. The mood doesn’t last, but what does? Our marriage has lasted eighteen years; still, I’d hate to be prideful about it. Who’s to say it’s love that’s kept us together rather than stubbornness or selfishness or fear of failing at love once again? And the truth is that we have failed, innumerable times. How is it possible to love another person the way that person needs to be loved? I could make Norma happier if I gardened with her. If I cooked more often. If I were a kinder stepfather. If I’d been more eager for us to have a child of our own. So pride would be misplaced here. But not gratitude. Gratitude we seat at the head of the table. We pour the wine. We serve the feast.

I’m middle-aged, middle-class, no longer the long-haired young man who feared a few extra dollars in his pocket would corrupt him. My beard is gray. I have money in the bank, and my beard is gray. Before Norma and I made love last night, I took a little blue pill. I was a devil. I was a god. I was a miracle to behold. Just like the old days, when I wasn’t so old.

I used to think I was a great lover. Now I understand: the greatness is in the love, not the man.

There’s nothing wrong with my desire to write in the morning, meditate in the morning, do push-ups and sit-ups and run in the morning. What’s wrong is feeling like a failure if I don’t do these things. What’s wrong is marching through the day like some army that wins battle after battle but loses the war. Who am I fighting, anyway? I can make time the enemy, but time bears me no ill will, treats us all equally, deals out one hour, every hour, on the hour. How I play my hand is up to me.

This morning, I’ll refrain from passing judgment. This morning, I’ll be merciful to the man who drank too much and smoked too much and ate too much last night. I’ll take off my black robe, step down from behind the bench, and sit beside him. This morning, he’ll be amazed to find a sympathetic ear. I might even laugh at one of his jokes; he means no harm. How many times has he begged for forgiveness? How many times have I condemned him? Now it’s just the two of us, the courtroom empty, the sun rising in the east.

I’m wearing a flowered shirt today. It’s a gift from Norma, who heard me say, not long ago, that I might want to wear a flowered shirt now and then. A flowered shirt might remind me, I said, that I don’t need to keep sacrificing myself to the god of self-improvement. A flowered shirt might remind me that I can celebrate life today, just as I am, not tomorrow, when I’ll be a better man; today, with all my limitations, not tomorrow, when I’ll finally have suffered enough. So here I am, in this lovely shirt, because flowers don’t apologize for being beautiful; because my loving wife remembered something I said, and knew I needed a little push — off the diving board, into the deep end. She must think I can swim. 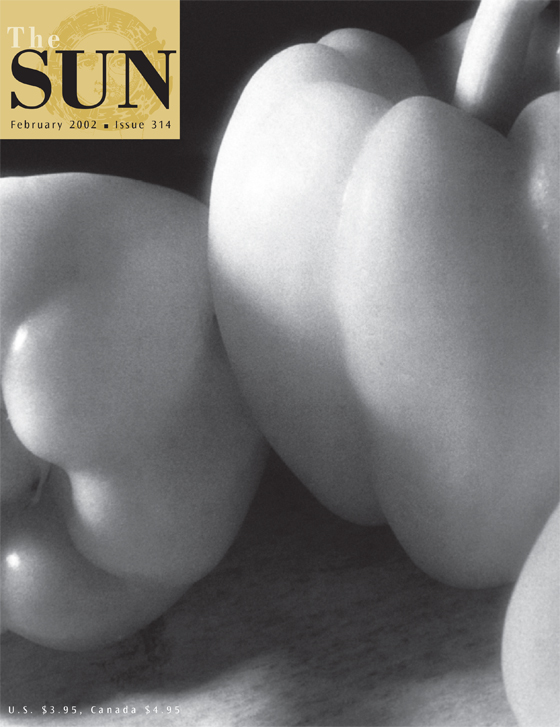 By Stephen Elliott
The Sun Interview

Anuradha Mittal On The True Cause Of World Hunger