In a contest between new technology and old ways of life, it is the traditional rhythms that will hold. Traditional societies make up more than two-thirds of the world, the two-thirds that will not be going online to “save” time but will remain wedded to the knowledge that if the bus doesn’t come that day, it will come someday. After all, there is nothing but time.

Our perception that we have “no time” is one of the distinctive marks of modern Western culture.

Reconsider your definitions. We are prone to judge success by the index of our salaries or the size of our automobiles rather than by the quality of our service and relationship to mankind.

What does a man need — really need? A few pounds of food each day, heat and shelter, six feet to lie down in, and some form of working activity that will yield a sense of accomplishment. That’s all — in the material sense. And we know it. But we are brainwashed by our economic system until we end up in a tomb beneath a pyramid of time payments, mortgages, and preposterous gadgetry, playthings that divert our attention from the sheer idiocy of the charade.

Many wealthy people are little more than janitors of their possessions.

The earth was created for rich and poor in common. Nature knows no rich. She creates us all alike and alike she encloses us in the sepulchre. What more resembles one dead man than another dead man?

To be without some of the things you want is an indispensable part of happiness.

Money frees you from doing things you dislike. Since I dislike doing nearly everything, money is handy.

The old Eskimo hunters she had known in her childhood thought the riches of life were intelligence, fearlessness, and love. A man with these gifts was rich.

I am immensely and continuously conscious of a world of nuclear bombs, of vast hunger, of curable injustice, of a meretricious press and cheap-jack television, of perilous and apparently endless international division, of unreasonable cruelty and suffering for which almost nobody cares, and of my own silly efforts to make money to provide me with irrelevant comforts or necessities like drink and to ensure some measure of security for my family. And I know that it is not the answer, because there is truthfully only one answer, which is absolute pacifism and absolute communism — not in the dreary, dogmatic party-political sense, but in the sense that my father would have called religious: the sense of mortal community. Not only do I know it; I knew it all along.

Who is rich? He that is content. Who is that? Nobody.

Never eat more than you can lift. 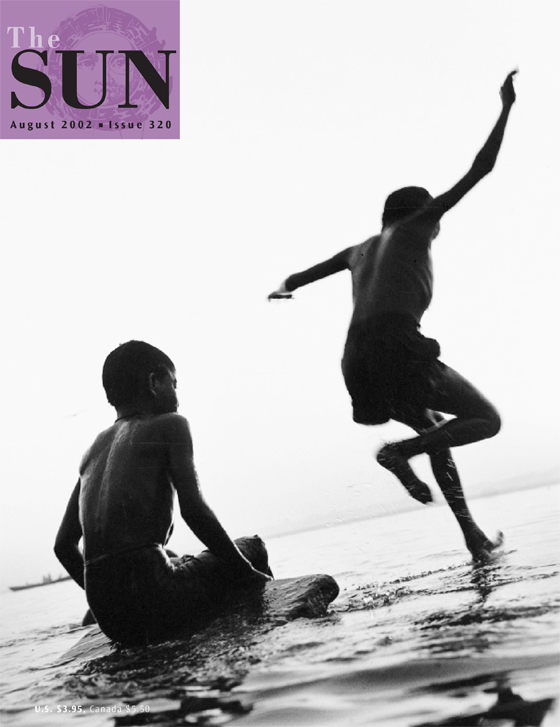 By Charles Goodrich
The Sun Interview

A Simpler Than Average Life