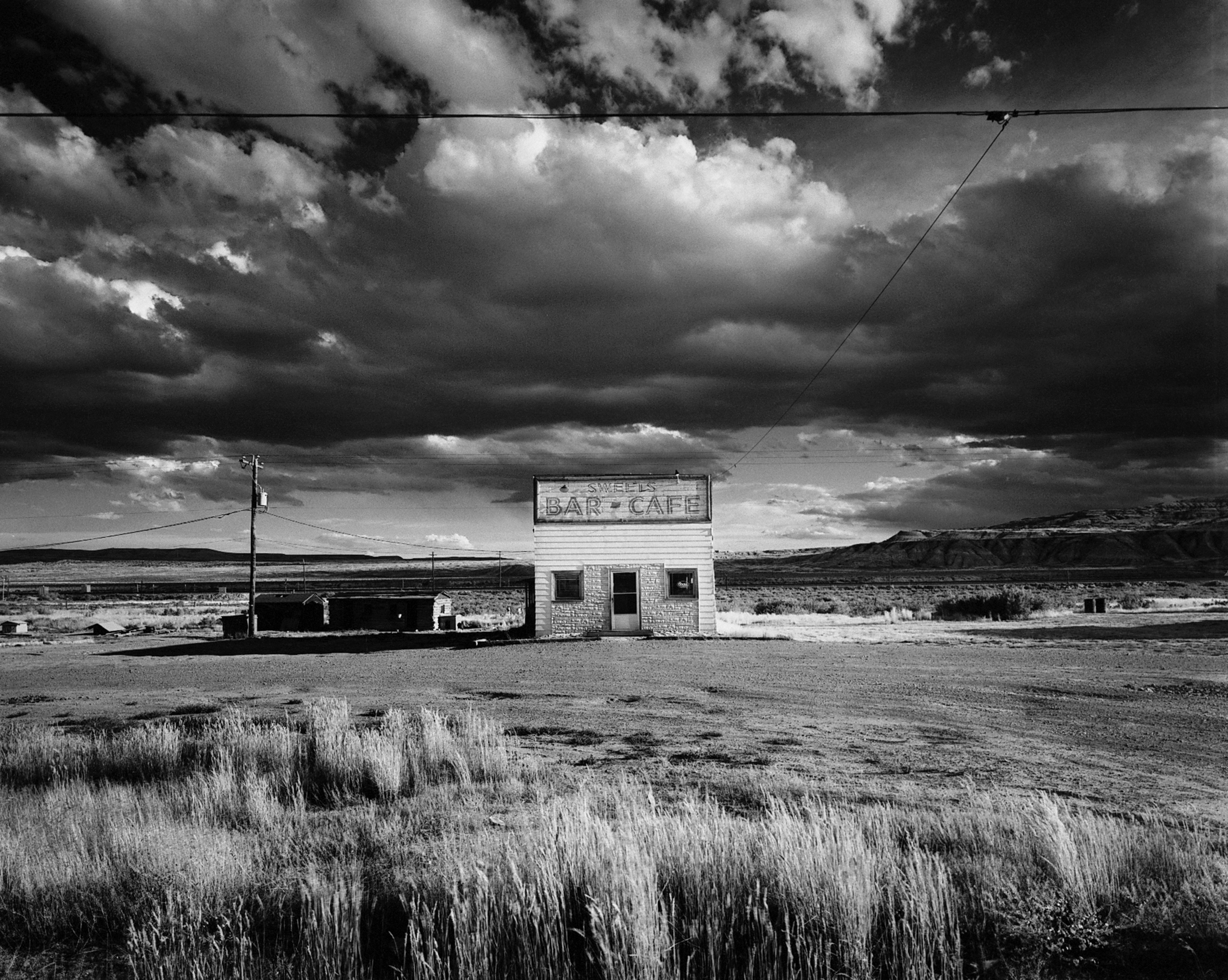 In Reno, Nevada, there is a hole in the air where a hotel and casino used to be. Back in the 1980s, my wife and I would sometimes stay there because the rates were low and the food was good. The building was demolished six years ago.

Now I stand across the street from where that hotel was and wonder where life goes. I gauge the approximate height of five or six stories, guess roughly where the room would have been where my wife and I made love, and find only a vacancy now between me and the blue Nevada sky.

A person coming to Reno for the first time would not know that anything ever stood here. They would not know of the hubbub of craps dealers, slot machines, and lounge singers. All that life is still here, yet not here. Up the phantom elevator goes a young man, hot off a winning streak at the roulette wheel, riding up to a room in the sky where he will make love to his wife: a very real event, now gone like a jet trail.

A block farther on, South Virginia Avenue crosses over the Truckee River. Marilyn Monroe cast her wedding ring off that bridge in the movie The Misfits. The bridge is still there, and so, of course, is the river, but Marilyn is long gone. You can rent the movie, though, and in the background, as she pitches her ring into the river, you will see the Mapes Hotel. It, too, is gone. In the Sky Room, on the fourteenth floor, you once could have seen Sammy Davis Jr., or Louis Prima, or Jo Stafford, or any of a long list of entertainers, all sky dwellers now. They were as real as anything, but their names evoke no memory for the people who have moved in since they died.

Where does life go?

I leave Reno and drive north up 395 into California. At Highway 70 I hang a left and head west, up over Beckwith Pass and down into the Sierra Valley toward Quincy, where I once edited the Green Mountain Gazette, a weekly newspaper that’s been gone for more than twenty years.

The Gazette was published out of a century-old craftsman-style house — now an insurance office — on Main Street, two blocks from the courthouse. On summer days, with the front door open, I would pound out stories on an IBM Selectric, writing ten thousand words a week while logging trucks rumbled past on Main.

Something has always attracted me to the underdog, and it’s hard to think of an enterprise with worse odds of survival than a raggedy-ass hippie paper in a largely redneck Western county. We were up against a reactionary, well-established, deep-pocketed competitor who could afford to wait us out. But we were young, and though we posed as cynics, we were idealists at the core. We thought we could change loggers into environmentalists, hawks into doves, and Republicans into Democrats. Failing that, perhaps we could trouble their sleep.

I would like to cast myself as the hero of this tale, but that role was already taken by Darrell, the Gazette’s publisher. Tall, lean, and laconic, Darrell had a degree in American studies, and he and I shared a peculiar kind of patriotism that expressed itself in respect for the nation’s contrarians. To phrase it a bit less loftily, we were upstarts and smartasses, and we drew precarious paychecks for it. Ray and Kenny took care of the graphic design and layout. Kathy, a young mom, was the typesetter. And Esther, Darrell’s girlfriend, did nearly everything else, from taking complaints to taking pictures.

The house was a newspaper office, but Darrell and Esther lived there, too, and Esther’s kids would come through the front office after school each day. In the summers, they’d play outside under the window as I wrote. On Thursday nights, all of us would troop down the rickety stairs to the basement, where the big layout tables and light boards were. Darrell would bring a case of beer, and we’d jack up the stereo and get down to work, dancing and passing a joint around, pasting and revising copy, choosing photos, arguing over headlines, and laughing. There was, as I remember, a lot of laughter. We were making something out of nothing, and we were doing it as a team.

Before that I’d worked in the academic world, where there is little or no sense of team spirit or shared enterprise. Every teacher is an independent contractor running his or her own little shop. There is much bickering, infighting, and petty squabbling. People at the Gazette weren’t any better than my former academic colleagues; they just didn’t have time for office politics. We needed each other if we were going to pull off this little twenty-four-page miracle every week, come hell or high snowdrifts. In winter Darrell sometimes delivered papers behind the plow, driving ten miles per hour, a wall of white on either side of his green Chevy van. We had high water, too, when the Feather River would wash out a stretch of canyon, and sometimes wash motorists off the road and into the torrent. Their stories would lead the front page the following Monday.

Monday was when the paper came out — and the complaints came in. Neglect to mention the Little League home run hit by an advertiser’s kid, and I could count on an angry voice on the phone. Then the chairman of a local environmental group would call to ask testily why coverage of its monthly meeting had been buried on page six. (It was inadvisable to offer the explanation that nothing remotely newsworthy had transpired at the meeting.) The DA would call to say that he’d been misquoted, and someone on the board of supervisors would dispute the characterization of his behavior at the weekly meeting. Grammar vigilantes were always ready to call attention to the inevitable gaffes we made. Every week, I vowed to put out an absolutely clean paper, without a single error. But there is a species of error that is visible only after it is too late to correct it. Like life itself.

And when we couldn’t do it anymore, when none of the backers could or would cough up any more money, when the printer would not extend us any more credit, Darrell called us all into his office, where he and Esther slept on the floor after each day’s work was done. He told us with tears in his eyes that it was all over, that he’d see that we all got paid, but that the paper was broke. There would be no last-minute reprieve, no financial miracle like those that had saved us a half dozen times before. We were through.

There were hugs, kisses, tears. Then Darrell and I bought a bottle of tequila and went down to the banks of Spanish Creek to get drunk. We said all the usual things one says at such a time: “We gave it our best shot” and “We don’t need to hang our heads” and “If we just could have lasted a few more months . . .” We threw rocks into the creek, stared at the sky, and thought our separate thoughts about what we would do next. There was little work to be had for editors or writers. Advertising revenues had dried up due to a recession. As the day slid toward evening, I said, a bit drunkenly, “Darrell, I think this is the last day of my youth.”

I’m embarrassed now by the grandiosity and alcohol-fueled sentimentality of that statement, but there was truth in it nonetheless.

Now, all these years later, I stand across the street and see our ghosts on the front porch of the house. We’re watching the parade pass by on Main Street, all of us drinking beer and looking forward to that afternoon’s rodeo. Darrell is there, leaning against the front pillar, and Esther is sitting on the steps. I’m on the porch swing with Ken, one of our freelancers, who is so drunk he calls out insults to the board of supervisors as they ride past in two convertibles.

I can see myself there, my hair long and blond, not short and mostly gray. “Ken,” I say, “shut up. We have to do business with these guys.”

A month after the paper folded, Darrell and I lit out for Boise, Idaho, in hope of finding work. It was a faint hope, but it was better than sitting around waiting for the phone to ring. We crossed the Great Basin, the land of the Shoshones, as desolate as a country can get. We didn’t see another car for hours on end. When we weren’t listening to music, Darrell listened to me go over the “if onlys” and “we shouldas.”

On the way back, after we’d struck out in Boise, we ate breakfast in Sweetwater, Oregon, and I began to bitch again about our bad luck. Darrell said, in a quiet voice, “Jaime, my daddy always said that a bitter pill is better swallowed than chewed.”

Where does life go? Some of mine went into the now-yellowing pages of the Green Mountain Gazette, a no-account hippie newspaper tucked away in the Sierras, in a county not even known to most Californians. Perhaps a few people there still unpack Christmas ornaments wrapped in those old pages. Perhaps they pause and read a line or two before taking up the ornament and carefully hanging it on a new tree.