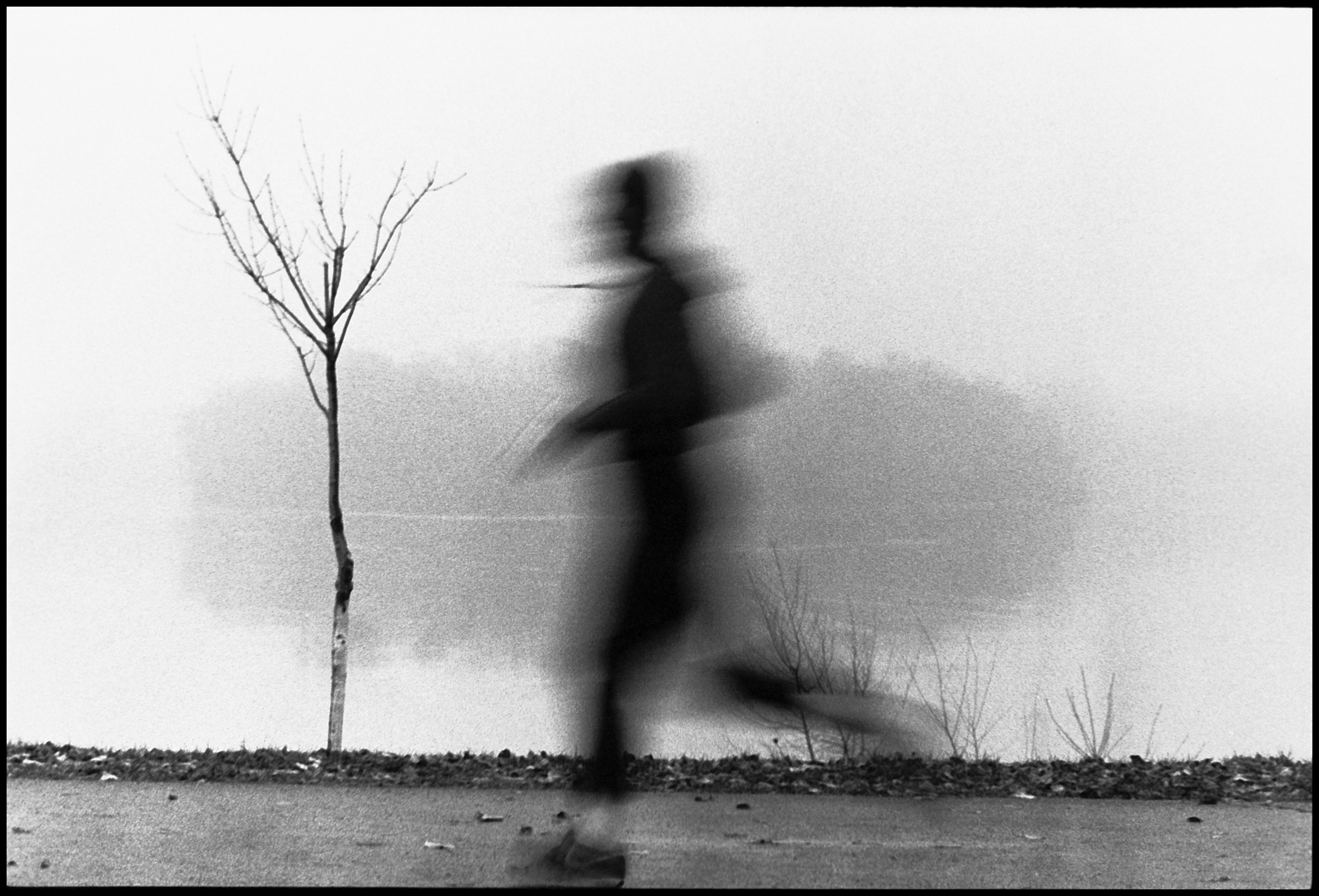 I met my boyfriend through the personals. His ad said that he was looking for a woman who was “athletic.” I assumed that was a code word for “thin.” After we’d been dating for several months, he told me I was wrong, that “athletic” had actually meant athletic.

Oops. Too late. We were in love.

I was a fortyish woman who had never done anything vaguely athletic in her life. I didn’t even like to sweat. To my boyfriend’s credit, he never nagged me. To my credit, I was very supportive of his running. He had finished the San Francisco Marathon and ran five days a week, in rain, wind, sleet, and snow. He even ran on the occasional pleasant day. I once watched him go running on vacation, a concept beyond my comprehension.

Now and then we would go to a park together, and he would run long loops around me while I walked. One day he came up behind me and said, “Run with me.” He said it as a joke, but I jogged along with him anyway. I started panting, my breath ripping its way out of my lungs. Sweat poured down my forehead, and pain stabbed through my right side. As I fell back to a walk, he slowed, glanced at his stopwatch, and said, “You ran for two minutes.”

Two minutes! After I caught my breath, I explained that I wasn’t wearing the right kind of shoes. He was kind enough to nod before jogging off.

I started walking on a regular basis, keeping a pretty brisk pace.

One of my New Year’s resolutions that year was to exercise. (Two minutes!) My boyfriend thought this was a good idea and offered the single most effective bribe he could have come up with: “If you can run for twenty minutes straight by next December,” he said, “I’ll take you to dinner at the Inn at Little Washington.” The Inn at Little Washington is the premier restaurant in the DC area; it’s incredibly expensive, the kind of place that has only two seatings per night, and requires reservations a month in advance — yet doesn’t feel uncomfortably fussy or pretentious. We had been there once before, on the one-year anniversary of our first date. The low-end half bottle of wine we’d selected had cost eighty dollars.

I wish I were a more noble person, but there it is: nothing my boyfriend could have offered would have inspired me more. We settled on some simple ground rules for the bet. He was surprisingly lenient, as if he wanted me to win, contrary to his competitive nature.

In January, I bought some yoga videotapes and thought about running.

In February, I bought some aerobics videos and thought about running.

In March, I was getting pretty good at the beginning-yoga videos, and I no longer felt as if I would die at the end of the twenty-minute aerobics workout. I thought about running.

Why not join a gym? you ask. The last thing I wanted was for other people to see my pathetic, sweaty, inadequate self huffing away on a treadmill. I would train in private, then whisk around the track and collect my dinner.

In April, I tried running in place in my living room with the shades down while I listened to NPR.

In May, I bought a sturdy running bra. (The catalog called it a “masher.”)

On Memorial Day weekend, having successfully run in place for twenty minutes in my living room, I went to the nearby high-school track with my boyfriend. It was too bad no one else would be around to witness my astonishing success. I believed that I would dash around the track for twenty minutes and be off to my victory dinner, never to run (or sweat) again. “Start your watch!” I gaily called.

Nine minutes later I wanted to collapse, and I did.

His well-meaning encouragement (as he circled the track without me) irritated me all the more.

Several days later, I drove to a small park where I had often seen joggers. The path went in for about a mile and a half to a dead end. You had to turn around and come back out the same way. My plan was to run on the way in, then cool down by walking back.

The park was more crowded than I’d remembered: mothers with strollers, couples walking hand in hand, people with dogs, and, worst of all, other (better) runners. I paced back and forth by the entrance for several minutes — “warming up,” I called it, though I knew better. Finally I plunged in, happily dashing past mothers and couples and dog-walkers. All was well, for about nine minutes, which didn’t even bring me close to the end of the path. Hunched over, hands on knees, my face a fiery red, I realized that I would have to trudge back, encountering all those people I had passed just moments before. As I made my walk of shame, they would gawk, aware that I couldn’t even run a mile. Couples would whisper snide comments about me. Runners would look away in embarrassment. Perhaps I could walk out after an appropriate amount of time had passed, as if I had run to the end. I seriously considered ducking into the woods to hide, but the bugs were brutal.

So I stood up and practically tiptoed back to the entrance, trying not to make eye contact. It wasn’t as hard as I’d anticipated. Few people even noticed me, let alone seemed to remember that I had buzzed by them earlier.

All my life I had wasted vast amounts of time and energy worrying about looking stupid, trying to fit in, and making jokes to ease away every difficult moment. Suddenly, in the simple act of not running well, I was forced to confront all those things: I looked stupid, I didn’t fit in with the other joggers, and I could joke as much as I wanted, but it would get me neither twenty minutes of running nor a fancy dinner with my boyfriend. That shouldn’t have felt liberating, but it did.

A couple of days later, I went running with my boyfriend on the track. I managed nine minutes and thirty seconds before collapsing. He called the thirty seconds “progress.” I felt like a kid who gets a trophy for showing up.

It was 2002, the year of the drought, and there was nothing to ease the humidity and haze of the DC summer. A new phrase entered everyone’s vocabulary: “code red,” which meant that ozone would reach a dangerous level. People were encouraged to stay inside on code-red days, but I ran through the soupy air, my goal being to run three times a week for however long I could stand. I can’t say I felt good immediately afterward, clutching my side, gulping car-warm water, and watching trees spin and tip dizzily. But later, back home, I found I was sleeping better, and my thighs felt slightly firmer when I prodded them.

Ten minutes was exciting. I started marking my times on a special calendar.

Twelve minutes felt like a nice, even number: a dozen.

I got bogged down at fifteen: half a sitcom, one quarter of the clock face, twenty-five cents’ worth at a parking meter. How could that feel like an eternity?

I went away for two weeks to a writers’ colony. I ran along a deserted, hilly street on a college campus, down one big hill and up the next. It was almost like running on vacation. Sometimes, to keep myself going, I felt the sides of my stomach, where, if I stood up straight and sucked in just a bit, I could detect faint muscle lines.

Eighteen minutes, in late August, was a major achievement: twice my first nine, nine times my first two, two minutes away from twenty.

Labor Day weekend was cool and rainy, but I went to the track with my boyfriend anyway. He was training for an October marathon and ran on a rigorous schedule that paid no attention to such niceties as good weather. Now that I knew firsthand how hard running was, I was in awe of his ability to run three hours or more on the same scorching days when I scraped out eighteen minutes.

We started running through the soft rain. No one else was out on this dreary holiday morning. Around the track I went, my feet smacking the shiny black surface. The seconds ticked by into minutes, time moving at a leisurely pace. Raindrops dripped from the brim of my hat. I found myself at nineteen minutes. If I could do nineteen, I could surely do twenty. Then I was at twenty, and I ran for ten more seconds, just because I could, before I stopped to enjoy my boyfriend’s applause. There I was, a fortyish woman who could run for twenty minutes straight: roughly two miles.

It’s now nearly a year later, and I am still running three times a week. Twenty-five minutes is my limit during the heat of summer, but in winter and early spring, I have reached thirty minutes. (My new goal is thirty minutes as a regular time by the end of the year.) Other runners often pass me, and my cheeks still turn an alarming, fiery pink. Nothing will ever make me like to sweat. But in June 2003, I ran my first 5K in pouring rain, my boyfriend at my side, slowing his pace to match mine.

We still haven’t had the payoff dinner at the fancy restaurant, but I don’t find myself thinking about it much.