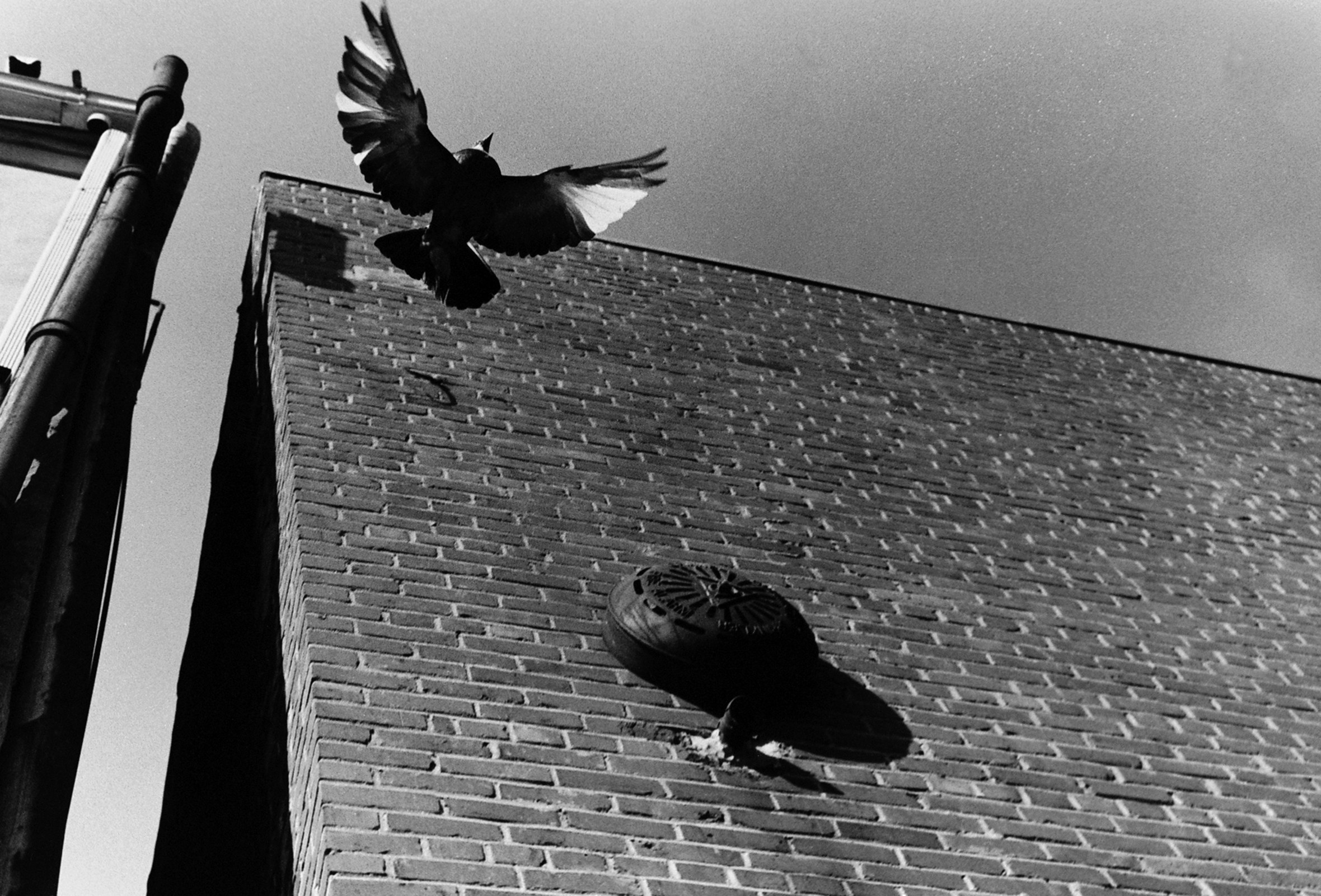 Sometimes when I’m sad, I become convinced that the world is going to end. And it will end someday, of course, but scientists give it billions of years yet. My “sense of impending doom” (the phrase psychiatrists use to describe this type of fear) is all out of proportion to what I know to be true.

Today I am sitting in traffic on a commercial strip in West Lebanon, New Hampshire, on my way to shop for groceries at Purity Supreme. I find this part of town particularly disheartening. In the past twenty years Staples, CVS, Subway, Pizza Hut, Shaws, TJ Maxx, PayLess, Borders, Burger King, Applebee’s, Wal-Mart, and Purity Supreme have all built franchises in pastures where wide-hipped Holsteins once kept the grass as short as a bowling green.

The woman in the car to my left is eating a sweet bun, and I can see from the urgency with which she crams it into her mouth that she is hungry not for food, but for sensation: the sensation of being alive, of being full. Watching her, I remember the sleepy sounds of cows grazing, their soft lips tearing the grass in unhurried rhythms. The woman is fat, and her flesh bulges around the seat belt designed to keep her alive for the years of trivial, aimless, debilitating consumption that lie ahead.

Yes, I guess you could say I’m sad.

I inherited this apocalyptic tendency from my father, who I think rather hoped he might be around to see the world end. That this would involve his own demise and the demise of his family would be a small price to pay for confirmation of his belief that life is treacherous, that youthful hopes and dreams rarely come true.

His theory was that humans had a fatal flaw in their design, that they were destined for extinction. I, on the other hand, argued that it was possible we were meant to evolve into a race of plump, oblong beings with large heads and atrophied limbs who rode around in motorized wheelchairs (decorated with small American flags) from which we directed the workings of the world.

I am passing Applebee’s now. In its ad campaign, the restaurant bills itself as a neighborhood hangout, a place where old friends shoot the breeze and eat good, basic food. This is pure fiction, aimed at our nostalgia for a simpler time. Applebee’s is a chain: no more, no less.

Last December an old soldier from the veterans’ hospital where I work walked five miles through the cold night and ended up at Applebee’s. It was the kind of story my father would have loved, were he alive to hear it. Despite his pessimism, he had a disarming American fondness for dramas in which the underdog survives in spite of the heartless machine.

It was after midnight, and the nurses were drowsy, or busy, or both. The old soldier, who was a little demented, wandered off his medical unit to find a place to smoke. He walked into the cold night wearing nothing but his blue cotton pajamas with Veterans’ Administration Hospital stamped across the breast pocket. He stood under the ice-chip stars and smoked a cigarette — or so he believed. As it turned out, he never lit it; he was fooled by his warm breath, steaming in the chilly air.

He began to shiver and, disgusted with the low-tar cigarettes his son had bought him, turned to go back inside. But the doors were locked. All the outside doors of the hospital locked automatically after 9 P.M. — a new policy designed to foil terrorists.

The veterans’ hospital sits on a hill overlooking town. After trying several doors, the old soldier headed for the lights of the commercial strip blinking in the distance. On his feet he wore terry-cloth slippers with plastic, nonskid soles. In his pants pocket were a quarter and a pack of useless cigarettes. He walked past the entrance to Route 91, over the bridge that spans the White River, over a second bridge that spans the Connecticut River, and through the old section of town. Finally, he arrived at the brightly lit strip.

Who knows why he chose Applebee’s. He went in and ordered coffee. He was a strange sight and drew the attention of a taxi driver, who invited himself to sit at the old soldier’s booth. He paid for the old man’s coffee and even bought him a piece of gluey pie. In this way he was able to enter the man’s dream, a dream of being a soldier in Korea, of a fighting retreat from the frozen Choisin Reservoir. The soldier’s friend Chesty Puller walked by his side, urging him on. Now he sat at the booth, a survivor once more, and watched the water drip from the icicles in his beard.

The taxi driver bundled the old soldier into his taxi and drove to the VA hospital, where he stopped at the well-lit entrance and pointed the old man toward the doors. Then, feeling satisfied with his good deed, he drove off.

Fifteen minutes later, by sheer luck, a cop making his rounds found the old soldier, true to his mission, heading back downtown.

In the grocery-store parking lot a retarded man in a Purity Supreme shirt is collecting carts. He says something to me about impending rain, though the sun is beating down like a flamethrower. I nod and smile. He loves his job and believes it is important. And perhaps it is. If he didn’t collect the carts, there would soon be no carts in the area inside the door, and then customers would be annoyed. How would they get their groceries? They’d shop somewhere else, and Purity Supreme would go out of business. So perhaps his is the most important job in the whole store.

I am supposed to be on a low-carb diet, so I go to the meat case first. I select bloody muscles from cows and pigs and chickens and plunk them into my cart. When I am done, my hands feel slimy. I envision the acres of pens where these creatures spend their lives. Streams of shit and piss collect in pools around them, polluting the water table. Men come by and ply them with rich grain. The animals press against each other, bored and sated. It is all they know.

I remember a story I saw on the news some years ago about a river barge full of cows headed for the slaughterhouse. While clambering down the hoof-scarred chute to the dock, one cow made a corkscrew leap over the barrier and landed on its back in the river. There just happened to be a cameraman there to capture the odd sight. To everyone’s surprise, the cow bobbed to the surface and swam to shore, where it disappeared into the thick woods.

It would certainly have died in the wild, but for a while it would have been free. No fences, no tractors; just the light dancing through the leaves, the loamy air, the warm rain, and the grass, all that sweet nothing.

But there was a happy ending. Some kind folks who lived nearby found the cow in the woods. They made a pen for it in their backyard and kept it as a pampered pet, a manure-scented symbol of true grit. In the news footage, it wore plaited flowers around its untagged ears.

In the cleaning-supplies aisle, gallons of Tide shimmer through my tears. Look at all these products to clean with! I wish I could keep my house clean, but it’s as if I wasn’t taught the trick of it. I sweep, I do dishes, I mop and vacuum over and over, but still the cupboards are splattered, the windows smeared. I get tired of doing things that won’t stay done.

I buy a mop head and continue on to cat food, then nuts; to makeup, then shampoo. And here I am at last, in fruits and vegetables. This is the best part: shelves and tables overflowing with color, scent, and texture. Every so often an automatic sprinkler sprays artificial rain on the leafy greens, to keep them fresh. I choose carefully, feeling each item all over with gentle, rapid pats. I have taught my daughter to do the same, and I am pleased to see her try when she’s with me. It’s all in the feel, I assure her. It just takes practice.

Busy at the pears, I look up and see, not five feet away, a sparrow sitting on a price sign. Its bright eyes scan my face. What is a sparrow doing here? The incongruity thrills me. I look up to the vast ceiling, where guy wires form cat’s cradles amid orange steel beams. I spot another sparrow zigzagging its way through the wires to land where two beams intersect. I imagine a nest there: of bits of paper and the lurid strands of fake grass that line Easter baskets; of styrofoam peanuts and rubber bands. And above the beep of the registers and the hiss of the sprinklers, I think I hear the cheep of hungry chicks.

Grinning like a fool, I point the birds out to all and sundry. Most nod their heads; they’ve seen them before.

They flew in when the building was under construction.

I ask the produce manager what the Health Department says about these birds, with their sharp beaks and dirty droppings. The manager admits he’s stymied. The birds are wise to traps, and birdshot is out of the question. The employees adore them and feed them leftover sandwich crusts and give them names. The store is a perfect habitat, free of predators and warm all year round. They eat the unpackaged bread and a berry here and there. And, in their favor, they do eat flies. There are at least ten birds now. How could he catch them all?

In this man-made setting, these small, drab birds are as exotic as cockatoos. They are evidence of nature’s ingenuity, its determination.

I remember a TV special I saw about the aftermath of the Chernobyl nuclear accident. To everyone’s surprise, wildlife abounds in the deserted environs of the doomed nuclear plant. Elk, wild pigs, wolves, and rabbits all seem to be flourishing. These animals have somehow learned to cope with the high levels of radiation. Who knows, perhaps there are mutations: A pig that can climb. A rabbit with a prehensile tail. An elk with a unicorn’s horn. Cells are quick-change artists. Life loves life. Humans may end, but the world won’t.

When I check out, I leave my sadness behind. It stays in the cart, whining and sticking its hands through the metal bars like a petulant child. To my trove of hopeful stories, I’ve added another: sparrows live in Purity Supreme. When I am sad and think the world will end, they fly into Armageddon with new plans.

By Jake Gaskins
The Sun Interview

All My Things Considered

The Morel Of The Story

By Laura A. Munson