When I visited New York City a year after the September 11 terrorist attack, I wasn’t sure I wanted to see Ground Zero — not after learning that it had become the city’s number-one tourist attraction. Besides, I’d never felt drawn to the World Trade Center. I didn’t like its monumental scale: how it rose floor after floor, in smooth, unfettered ascension, to those quiet boardrooms where wealth and its unequal distribution were worshipped. But on my first night in the city, I dreamt of people jumping from the Twin Towers. The next morning, I got up before dawn and grabbed a cab downtown.

Except for a few security guards, the place was deserted. With all the rubble cleared away, there wasn’t much to see. Enclosed by a chain-link fence, the sixteen-acre expanse looked like just another construction site. Standing there, contemplating what wasn’t, I was reminded that I’d never seen the Towers except from a distance. Though I was born and raised in New York, I moved away before they were built. On subsequent visits to the city, I never went to the financial district; you might say I had no business there.

Alone on the viewing platform, the sky still dark, I craned my neck, wondering how far back I would have had to lean to see the top of the Towers. I thought about the nearly three thousand people who died. I imagined that, like me, they once thought they knew something about the future. Maybe they started their day by revising their to-do list, rescheduling an appointment, bending the future this way and that. How pliable the future must have seemed — until the moment it refused to budge. And no matter how they coaxed or bribed or pleaded, the future insisted it didn’t know them.

I tried to keep it all in perspective: More than 150,000 people die every day in this world. They die in childbirth. They die in earthquakes and fires and mudslides. They die in neat little houses, waiting for their lives to change. I reminded myself that terror is a daily fact of life for the hungry, for the dispossessed, for those who are persecuted because of their race or politics or religion. But the salesman in me couldn’t close the deal: my grief spiraled up like smoke from a fire I thought had died a year before.

All of us know, at least intellectually, that death can come suddenly and without warning. For most of us, though, it’s not a deeply felt awareness that shapes the way we live. I recalled what a powerful lesson in impermanence September 11 had been for me: stopping time, jerking me out of my usual preoccupations, reminding me not to dwell so far from myself, not to build my dream house there instead of here so that I’m always living in the future, always making payments on a house I’ll never live in. After September 11, I ate more slowly, treated strangers more kindly, noticed things I’d overlooked before. For a little while, I was more present. But this state, too, was impermanent. Nothing lasts, including the reminder that nothing lasts.

Yet, as a symbol, September 11 has endured. When I left lower Manhattan that morning, the vendors were just starting to unload their Ground Zero T-shirts and mugs and ashtrays, their Day of Terror commemorative books. Within weeks, President Bush would win approval from Congress to go to war with Iraq. We must be ready to strike first, the president would insist. We must be willing to bring the war home to the terrorists. War is always ready and willing, of course — always prepared to gather up its victims from the land of the living and set them down in their shallow graves. War turns away no one: men, women, children; there’s always room for one more.

I read recently that a memorial exhibit for those who died on September 11 will include crushed police cars and firetrucks, grotesquely mangled steel columns, and sections of floors that were compressed and burned into molten objects. The idea is commendable. Most memorial exhibits are too organized, too tidy; by sanitizing history, they defeat their very purpose. What I’d really like to see, however, is a memorial that portrays the horror not only of the September 11 attack but of President Bush’s subsequent attack on democracy. Ordering the mass roundup and imprisonment of foreigners, ramming the USA Patriot Act through Congress, lying about the danger Iraq posed to the United States, sanctioning the torture of prisoners — there are so many exhibits to choose from. Bring a sandwich. Spend a day.

I try to remember that our president is only human: one of the helpless sinners Jesus died for; one of the innumerable sentient beings the Buddha vowed to enlighten. I try to remember how difficult it was for many of us to agree what this country’s response to the September 11 attacks should have been. The president has repeatedly said it was a day that changed everything. That’s certainly true for those who died and for those who lost their loved ones. It’s true, too, for the politicians and the defense contractors and the flag makers. Sadly, it’s also true for President Bush, who leapt upon the tragedy like a vulture on fresh roadkill. Nearly three years later, he’s still feasting on the remains.

I was disappointed with Sy Safransky’s September Notebook. I am a public-school teacher and a conservative Republican. Though Safransky is an intelligent man, his entire page was based on ignorance — and I say that with kindness.

President Bush didn’t ram anything through Congress. Our elected officials overwhelmingly voted to support the war. If you truly believe that your senators and representatives are so weak-minded that they can’t vote against something they oppose, I would suggest campaigning for new ones.

Our country has fought many wars, some on our own land. I don’t know anyone who would deny that the Civil War was crucial to the abolition of slavery. Abraham Lincoln was able to see that although death is a high price to pay for freedom, war was necessary to protect our nation.

The United Nations was developed for the sole purpose of protecting countries against another dictator like Hitler. Saddam Hussein, who killed millions of his people, was such a dictator.

I don’t believe that Bush is feasting on the remains of our national tragedy. I believe we have a president who can make a decision; who listens to all sides and presents his agenda with confidence; who is protecting the people of this country.

September 11 had a lasting effect on me. I looked around me and saw things that I might have overlooked. I changed. I went from thinking the same thoughts Safransky did to taking the time to understand the history of our nation. And this is where I ended up.

Mimi Higgins via e-mail
More Letters
Thank You Your donations helped to keep our ad-free, nonprofit magazine in circulation last year, funding everything from production to distribution. Learn how you made a difference last year. Learn More 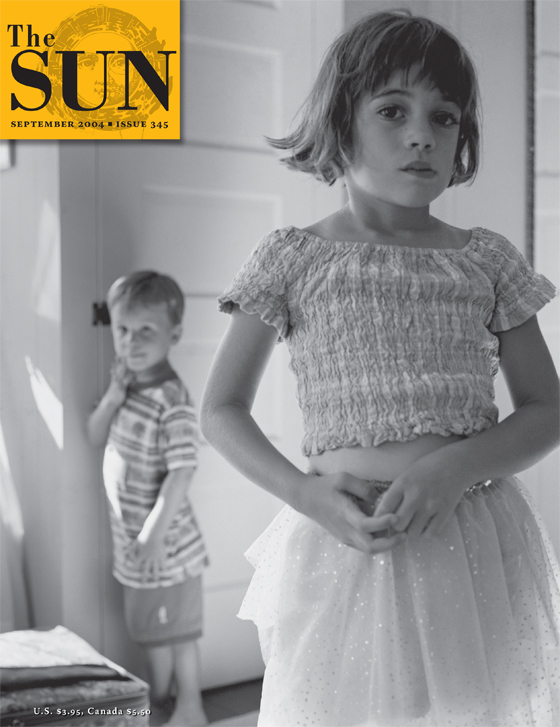 Stephen Elliott Trails The Candidates On The Road To The Nomination

By Stephen Elliott
The Sun Interview

Twenty-Eight Words That Could Change The World