With the death of 150,000 people in the South Asia tsunami still dominating the headlines, I didn’t feel much like celebrating New Year’s Eve, but I kept my promise and took Norma dancing. I knew she’d been looking forward to it, and I remembered something a friend had once told me: his biggest regret, while waiting for the results of a biopsy his doctor had ordered, was not having taken his wife dancing more often. Out on the dance floor, however, I found it difficult to put the tragedy out of my mind. I reminded myself that more than 150,000 people die every day in this world; that Norma and I had made a donation to the relief effort; that here it was, New Year’s Eve, and the band was better than I'd thought it would be. Later, we made love, waves of passion carrying us away.

How domesticated I’ve become: married to the same woman for twenty-one years; a faithful companion to my two cats; a man about to turn sixty whose habits are very . . . habitual. I even chastise myself in habitual ways, excoriating myself decade after decade for the same modest sins of commission and omission: eating too much, praying too little. Of course, all this can change in a moment. One day it will. As a Buddhist monk in Sri Lanka said after the tsunami: “We try to explain to people the impersonal nature of the event. Our life doesn’t belong to us; it’s like a flame that can be extinguished in an instant, without warning.” The reality of impermanence is hard to bear. Sometimes I try to shut it out; like everyone, I have my ways. But, paradoxically, I feel more alive, more grounded, when I acknowledge that I can’t know anything about the future. Anything. Tomorrow is a secret the world knows how to keep.

In an article entitled, “Where’s the Miracle in a Tsunami?” the spiritual teacher Marianne Williamson suggests that those swept away by the tsunami didn’t die in vain because their dying “helped to awaken slumbering humanity to the sanctity and fragility of life.” I doubt that a grieving parent in South Asia would find much solace in such new-age sophistry. When my daughter Mara was badly injured in a car accident several years ago, a friend suggested it might be a “blessing in disguise.” I knew what she meant: perhaps the experience would compel Mara to do some soul-searching; perhaps it would change her in some important way. Perhaps, I thought. Perhaps it would turn out to be the best thing that could have happened to Mara. But would I ever have wished it on her? Of course not. It was the last thing I would have wished for. Did that mean I didn’t want my daughter to experience what she needed to in order to grow? Checkmate. Metaphysics speaks one language; the heart speaks another. Imposing a philosophical concept on another person’s suffering merely increases the distance between us. Isn’t it better simply to remember that everyone has the same wish to be happy and free of suffering? Maybe I can’t fully appreciate the mystery of a human incarnation unless I accept that tragedy can be a blessing. For all that, it’s no less a tragedy.

The death toll from the tsunami has risen to nearly 250,000, but a month after the event the story is no longer on page one — not in the New York Times, and not in the North Carolina press. Here, everyone is still talking about the traffic gridlock that followed a one-inch snowfall last week. As the snow quickly turned to ice, there were hundreds of auto accidents; drivers were stranded on roads for hours. “PARALYZED!” the banner headline in our local newspaper read the following morning in letters not only bigger than the tsunami headline but, at one and a half inches, bigger than the snowfall itself. Of course, had the newspaper used the same formula to describe the wall of water that smashed into dozens of coastal villages, that day’s edition would have been impossible to print, impossible to deliver, impossible to believe. “IMPOSSIBLE!” the forty-foot headline would have screamed. IMPOSSIBLE! for the sea to be so ruthless. IMPOSSIBLE! for Mother Nature to be so indifferent. IMPOSSIBLE! for God to nap through it all in his La-Z-Boy, the remote in his hand. Still, the suffering of those caught in a tidal wave doesn’t diminish the suffering of those caught in a traffic jam. Suffering is suffering. A man stuck in his car is still a man, not a “harried commuter.” Maybe he’s on his way to visit a dying friend. Maybe he hates himself for having given in to some familiar temptation the night before. Viktor Frankl, the psychiatrist who survived three years in Auschwitz and other Nazi prisons, observed that a person’s suffering is similar to the behavior of a gas: “If a certain quantity of gas is pumped into an empty chamber, it will fill the chamber completely and evenly, no matter how big the chamber. Thus suffering completely fills the human soul and conscious mind, no matter whether the suffering is great or little. Therefore the ‘size’ of human suffering is absolutely relative.”

In the middle of the night, I’m awakened by an eerie cry from the woods near our house. It sounds like a wild animal, maybe a wounded one. I consider going outside to take a look, but it’s cold, and I’m tired, and after a couple of minutes, the sound dies away. I start to drift back to sleep, wondering what, if anything, I might find there in the morning. Dropping like a stone from this strange world to the even stranger world of dreams, I hear a different cry: the sobs of a young mother from Indonesia who’s been looking for her missing son. Tens of thousands of stricken parents are walking behind her. How far they’ve come. How exhausted they must be. Now they, too, give up their futile search and begin their awful keening.

Sy Safransky’s stop-the-presses reaction to the South Asia tsunami in his March 2005 Notebook basically catapults the loss of life there to a higher plane than, say, the genocide of Sudanese farmers in Darfur: roughly one hundred thousand have died and 2 million been displaced during the crisis in Sudan, though it has taken place over two years, instead of two hours.

So I ask: Why is what happened in Asia so much more worthy of our collective attention and guilt? Is it because it was an arbitrary act of nature? Because it was so sudden, so breathtaking? Or is it because we were kindly reminded of it again and again by our media?

Of the two tragedies, the one more worthy of our guilt and shame is the one in Darfur: Because it is a grievance perpetrated by humanity upon humanity. Because it involves genocidal activities barely five hundred miles from the last genocide we failed to prevent. Because the international community is about to renege on much of the aid it has pledged to Sudan. Because we don’t pay it any mind in our daily, weekly, or even monthly lives.

Todd Myles Carnam Ann Arbor, Michigan
More Letters
Thank You Your donations helped to keep our ad-free, nonprofit magazine in circulation last year, funding everything from production to distribution. Learn how you made a difference last year. Learn More 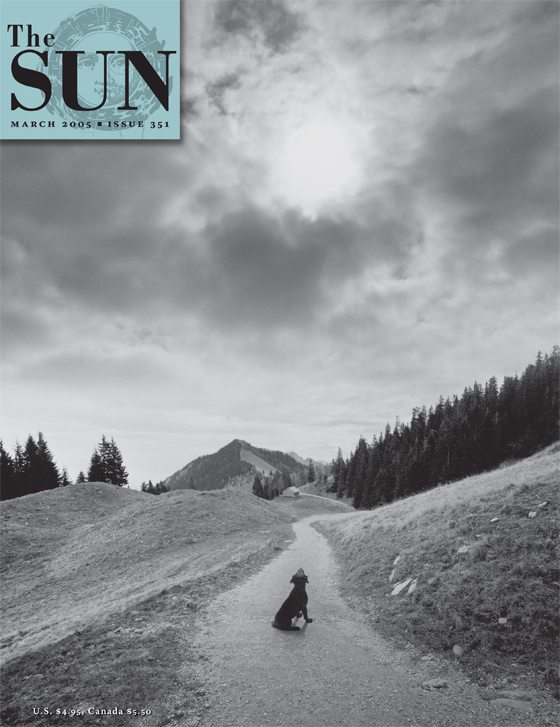 Yossi Klein Halevi’s Quest For Reconciliation In the Holy Land

Four Mandalas For My Father