Before I started The Sun thirty-one years ago, I got a lot of advice. Had I followed most of it, I wouldn’t be sitting here today with our 353rd issue in my hand. So when I got a call recently from a young woman who wanted my advice about starting a magazine, I was hesitant to offer any. Mostly, I listened.

The woman was idealistic — very idealistic. She’d already spent more than a year defining her editorial mission and gathering wisdom from editors around the country. With great enthusiasm, she described how her publication would be different from all the others on the newsstand. Impressed by her thoughtfulness and passion, I listened for about ten minutes before I broke in. “Your ideas sound great,” I said, “but at some point, you’re going to have to give yourself a deadline and put out your first issue.”

The line went silent. “I know,” she replied finally. “But I don’t like deadlines.”

I couldn’t help but laugh. I don’t like deadlines either, but I’ve learned to respect them, as one respects an exacting teacher. A deadline doesn’t care who your parents were, or what sign you were born under, or how you’re feeling today. A deadline doesn’t care how many people advised you, or whether their advice was worth a damn. When I started The Sun, I had no idea I’d soon be applying the seat of my pants to the seat of my chair for sixty or seventy hours a week, week in and week out; that I’d have to meet not just one, but many, deadlines each month — deadlines for selecting material, for editing, for proofreading; and that I’d often be up half the night collating and stapling each issue. But such mundane tasks, I soon learned, were as important to the magazine’s survival as the lofty ideas that gave birth to The Sun.

In 1974, when I stood on the street selling the first issues, I was an idealistic twenty-eight-year-old with hair down to my shoulders. A lot has changed since then. Instead of doing nearly everything myself and using my knapsack for an office, I now work alongside more than a dozen colleagues in a lovingly restored old house in Chapel Hill, North Carolina. Rather than being peddled on the street, The Sun now goes out to sixty-five thousand subscribers every month. Equally astonishing to me is that last March I turned sixty. Leo Tolstoy was right: “Old age is one of the most unexpected things that happen to a man.” But even though most of my hair is gone, my idealism isn’t. I still cast my lot with the rebels and the dreamers. I still think it’s foolish to bow to the God of Playing It Safe. This is the same god who warned me, when I started The Sun, that I had no money, no business plan; who insisted, when I dropped advertising from the magazine, that I was making a big mistake. Maybe he also sent those two MBA students who analyzed The Sun’s finances in 1979 and concluded, with exemplary logic, that the magazine wouldn’t last another year. They got everything right except the nature of reality, which is more mysterious than any of our calculations.

I’m grateful for The Sun’s modest success, and I know better than to take anything for granted: not my next breath, and not the next breath of this magazine I love. The publishing world is littered with the wrecks of dreams that died, and the odds are still stacked against an ad-free, reader-supported magazine that speaks not from an ideological perch but from the heart of the human experience. Many chain bookstores won’t carry The Sun because it isn’t flashy enough. Postal-rate hikes continue to favor large publications filled with glossy ads over smaller, nonprofit journals. Just last year, I was saddened to learn that yet another idealistic magazine I respected had succumbed to the economic pressures that conspire against independent journals. Its name was Hope.

Once again, therefore, I’m writing to ask for your help as a Friend of The Sun. Your tax-exempt donation will allow us to continue sending hundreds of free subscriptions each year to libraries and prisons. It will help us keep The Sun free of advertising, which would be an unwelcome intrusion in a journal as intimate as ours. It will permit us to pay more to writers for the kind of brave and honest work that’s increasingly hard to find in the mass media. Let’s face it: a free press doesn’t mean much if we don’t support the publications that are worth reading.

I have no idea whether my young caller will ever publish her first issue — or her second. Half of all new magazines never make it to issue number two. But no one can predict what will happen when one of us takes a leap of faith — not the experts, not the critics, not even ourselves. So mostly I offered encouragement and invited her to call again if she needed to talk. And I told her that the best advice I could give her was not to follow anyone’s advice. After all, The Sun’s very existence is a reminder that, even in a nation dominated by corporate interests, any dream is possible — and that grace counts as much as hard work when it comes to making a dream a reality. Here at The Sun, when grace takes the form of an encouraging letter or an unexpected donation from a reader, I’m reminded of an Italian proverb: “For a web begun, God sends thread.”

Someone asked me recently how much longer I want to run the magazine. I told him that forever would be ideal, but I wasn’t sure I could bend the laws of space and time. Here and now — which is all any of us have — my work is to keep faith with my readers. A wise man once said that Abraham Lincoln was a great president because he knew he was only acting president. I’m no Abraham Lincoln, but in that spirit I try to remember that I’m only acting editor — here to serve the luminous intelligence at the heart of The Sun, even though I can no more define it than I can quench your thirst with the letters that spell water. Better, month after month, to send the bucket down into the well.

P.S. You may send your check to The Sun, 107 North Roberson Street, Chapel Hill, NC 27516. You can also donate online at www.thesunmagazine.org. Your donation is tax-deductible, and we’ll send a receipt for your records.

In his open letter to supporters of the magazine [“Friend of The Sun,” June 2005], editor Sy Safransky tells readers that their support makes it possible for him to send free copies of The Sun to prisoners.

I am one of the indigent prisoners referred to in that letter. I have received The Sun for six months now, and I love it. The writers expose me to a level of thought I have not experienced before. Sometimes I feel enlightened, other times confused. Regardless, each piece of writing helps to open my heart and mind.

Doc Ansaldo Ione, California
More Letters
Thank You Your donations helped to keep our ad-free, nonprofit magazine in circulation last year, funding everything from production to distribution. Learn how you made a difference last year. Learn More 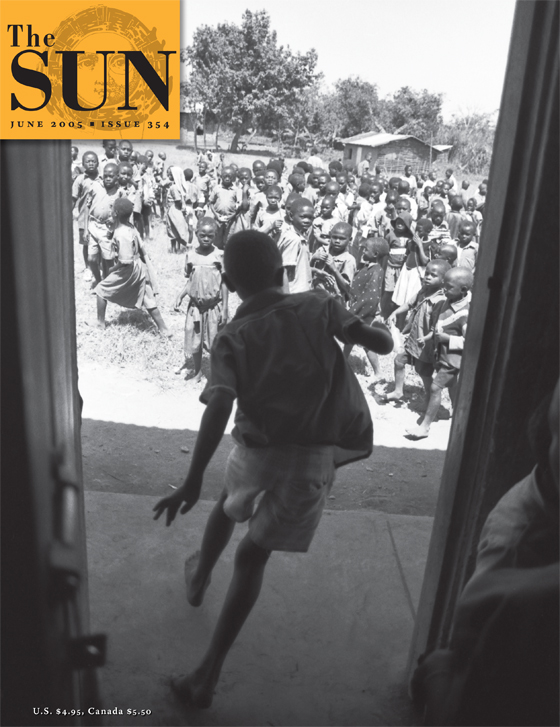 By Laura A. Munson
Fiction