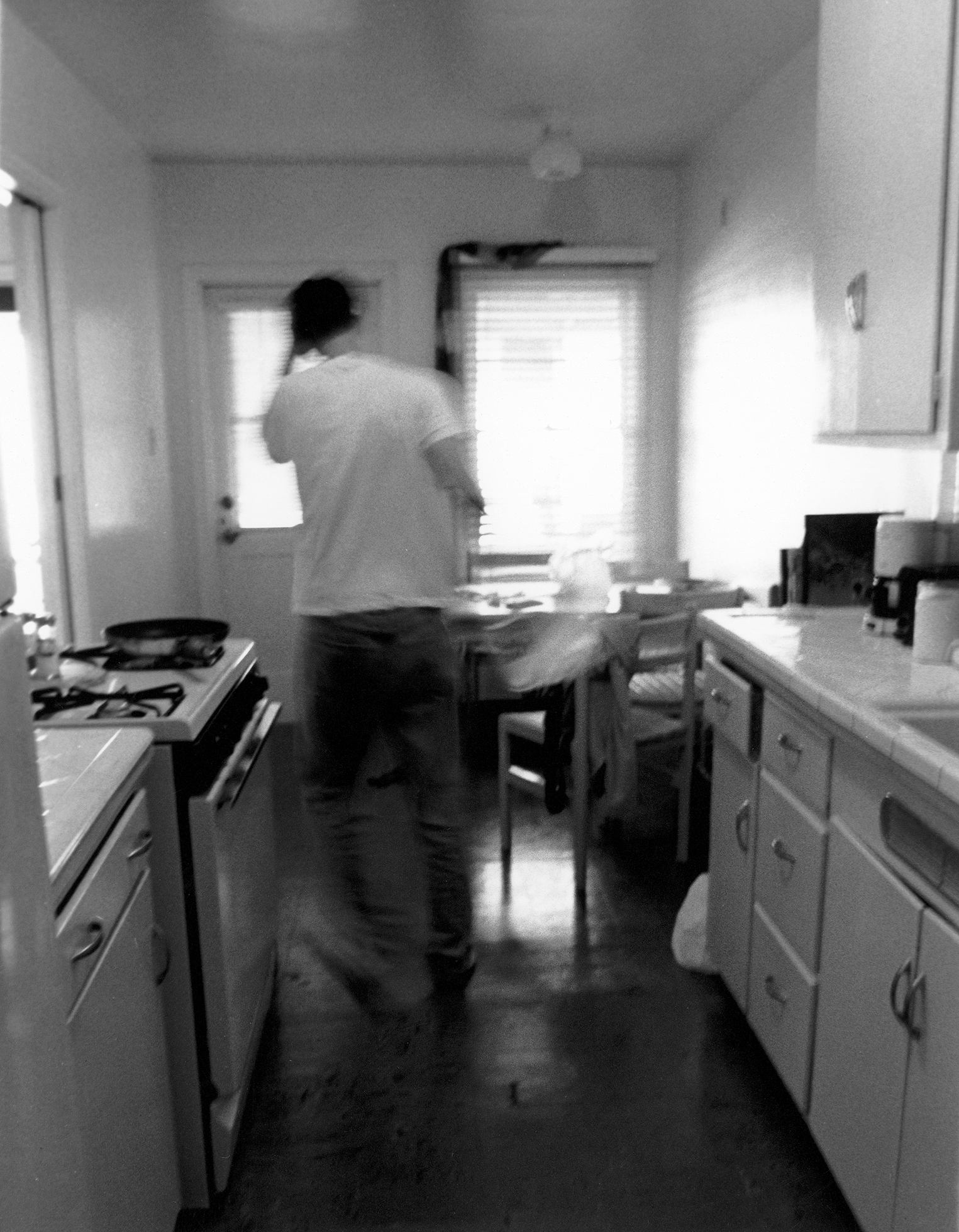 “SO, aren’t you going to make the offer?” my mother said when I answered the phone.

I had no idea what she was talking about. “What do you mean?”

Again, I drew a blank.

“Oh, for God’s sake,” she said. “Can your brother and I stay with you? We don’t have anywhere else to go.”

Of course. They were living in coastal Mississippi, and their new home was in danger of being swept away by the approaching hurricane, Katrina.

My younger brother Eric had recently taken a job on the Gulf Coast, keeping books for a few family-run hotels there, and my mother had come to live with him after she’d given up on working. She was losing her vision, but her inability to hold down a job had as much to do with her attitude as with her disability. She hated the South and wasn’t too keen on living with my brother. Still, at least he’d made the offer.

“You need to stay with me,” I said. It was part declaration, part question.

“We need to stay with family,” she said.

THE day my mother and my brother flew in, I went to pick them up at the airport. At first I’d told them I couldn’t be there: I had to teach a class. (Of course, as the instructor, I could easily have canceled.) My mother’s reply was “So help me God, if you make us get a cab, I’ll pick up the goddamn white courtesy phone at the airport, page Mother Nature, and tell her to send Katrina to find you.”

My brother trailed behind my mother at the terminal. He didn’t look happy to see me. We hadn’t talked since I’d gone away to college years ago, leaving him and my mother in the trailer park in Illinois. He’d never said as much, but I think he resented my going to college. I could tell he was proud that he’d become an accountant and now had the money to take care of himself, and our mother as well. He liked living in Mississippi. The conservative atmosphere agreed with him, as did the offshore casinos.

In the car my mother kept looking warily at my brother’s face, which made me nervous. Could she tell, even with her limited eyesight, how unhappy he was to see me?

“My apartment is real small,” I said. “It’s real, real small. Conditions are going to be cramped.”

“We all lived together before,” Eric said. “I’m sure we’ll get used to it.”

“Is it clean?” my mother said.

This was especially insulting coming from her, because she’d never been a good housekeeper. Not that it had been her fault. After my father left, she’d been forced to work three different jobs. No time to wax the kitchen floor and polish the light fixtures.

“Yes and no,” I said in response to her question.

“What an answer,” Eric said. “If it’s not clean, just say so. Is that what they taught you in grad school: yes and no, everything’s relative, blah, blah, blah? They don’t let you flit by with that shit when you get a real job.”

“Get along, dummies,” my mother said. “It doesn’t matter whether it’s clean. That’s the good thing about going blind: who cares what something looks like.”

OVER dinner we drank a bottle of wine, which felt odd. When I was growing up, none of us had ever touched alcohol. It had been something that set us apart from the rest of the poor families in the trailer park — or so we’d needed to believe. Now here we all were, drinking together.

The conversation hit a particularly uncomfortable lull, though we hadn’t been talking that much to begin with.

“How bad do you think things are going to get?” I asked, thinking it might break the tension.

My mother reached over and pinched my hand. I felt embarrassed. I knew I had said something stupid.

Changing the subject, she told us that ever since she’d lost most of her sight, the locals in Mississippi — particularly older women — treated her like an oracle. They would come up to her in restaurants or stop her in the middle of the street and ask her personal questions about their life or their future. It was the strangest thing, she said, and a little scary. Only to relative strangers could she play this role; for anyone who’d known her for any length of time, the illusion vanished.

“You always have,” my brother remarked, tapping his fork against the edge of the table.

My mother looked to me for support. She could always count on me to take the opposite side from my brother on any issue.

“Strangely enough,” I said, “I’m not going to argue with him on that point.”

“There’s a first time for everything,” I told her.

“Congratulations to the both of you, then,” she replied.

Going on with her story, she said that if she were in Mississippi now, she’d be afraid someone might approach her and ask about the well-being of a relative, friend, or spouse. She wouldn’t want to have to tell them she didn’t know. “Sometimes I think it would be better to lie,” my mother said. “Is there anything more cruel than to say, ‘I don’t know’?”

I surprised myself by laughing at this, which made my brother laugh. Then we were all laughing, as if something truly hilarious had been said. We’d been needing some sort of release, though I wasn’t sure we deserved one.

THE next morning my mother walked into my room and stumbled over a pile of laundry. “If I’m aware how much of a pigsty this place is, it must be pretty bad,” she said.

I didn’t say anything. It was the only way I knew to punish her.

She grabbed my hand and forced me to open my palm. “I’m going to tell your future,” she said. “I might as well take the role I’ve been given and run with it: Madame Mom, the blind marvel — knows all, sees all.”

I told her to go ahead. I needed something to look forward to.

She dropped my hand. “What do you mean?”

“Don’t tell me you need something to look forward to. Really. Don’t.” She was stunned and a little angry. “Your family is here. We’re together.”

Later that day my brother asked if I wanted to come outside and have a smoke.

I don’t smoke, but I like people who do. They always seem to have a story to tell, something on their minds, as if the cigarettes were just a distraction, a prop to keep them from focusing on their problems. My brother had started smoking in junior high. I remember the first time I saw him sharing a cigarette with friends. He looked so cool. I was jealous. As the older brother, I was supposed to be the mature, edgy one.

Eric and I went outside, and he offered me a cigarette. He looked disappointed when I refused.

“We didn’t have to stay with you,” Eric said. “I have money. We could have stayed at a hotel.”

“This is a good thing,” I said. “I wanted for all of us to spend some time together.”

“A little,” he said. “I don’t want anything to happen to my house. I worked hard for that house.”

He had worked hard. It was a real house: two stories, garage, attic, shutters. For the first time I was aware how important owning a home was. It embarrassed me that I’d never thought of this before.

“A house is a good thing,” I said. It felt like a stupid comment. “Do you think I’m dumb for saying that?”

“Of course not,” he said. “I was thinking the same thing. Plus, you’re my older brother. You can’t be too stupid — even if you are an overeducated shithead.”

My mother came outside. My brother dropped his cigarette and squashed it with his foot.

“You sure?” my brother asked.

“It’s been a long couple of days,” she said. “Give me a goddamn cigarette.”

LATER that night the three of us were sitting around watching TV. We couldn’t watch the news of the hurricane, because it made Eric and my mom too nervous. So we settled on a thriller on the Lifetime channel: the heroine was unknowingly married to a serial killer who’d had plastic surgery to make him look exactly like her husband, whom he’d secretly killed. My mother was so involved in the plot she couldn’t sit still. She kept gasping and saying, “Oh my God,” over and over again. I didn’t understand how such a mediocre movie could affect her so. She couldn’t even see the screen.

“What’s your problem?” my brother said to my mother.

I immediately felt bad. How could we deny our mother this small pleasure?

My mother picked up the remote and turned off the sound.

“Close your eyes,” she said to Eric. Then she turned to me and said, “You, too.”

“I’m no fool,” she said. “Some people even think I have mystical powers. You’d better shut those eyes.”

How could I ignore the command of someone with mystical powers? I shut my eyes.

The room was silent all of a sudden. Everything else dropped away. If I didn’t let myself breathe, I could hear the wind outside: a low sound, like the faint echo of someone calling for help. I started to feel scared. I wanted to open my eyes, but I didn’t. My mother couldn’t see anything, and I wanted to be with her in the darkness. I needed to be with her.

I reached over and held her hand. I felt ridiculous, a grown man holding his blind mother’s hand as they sat in a silent room with their eyes closed. This is what my life had become. I opened my eyes, just for a second, and saw my brother holding my mother’s other hand.

I took a deep breath and tightened my grip.