My daughter Mara has a suspicious lump in her breast; a biopsy is scheduled for later this week. If the lump turns out to be benign, I can go back to worrying about how far behind I am in my work or about the accelerated pace of global warming. If the lump isn’t benign, then all my unanswered correspondence and all the doomsday scenarios will have to move to the back of the bus. They’ll need to pay attention to the sign that says, DO NOT TALK TO DRIVER. Those hairpin turns up ahead, the sharp drop-offs on either side: Don’t I need to focus on them? Don’t I need to figure out where the hell we are, and why the gearshift is grinding, and how to turn on the windshield wipers now that it’s raining so hard?

A friend I hadn’t seen in several years asked what my spiritual practices are these days. “Whatever they are,” I replied, “they obviously aren’t working very well.” He laughed. He thought I was being modest, but I was just being truthful about how little progress I’ve made. After all, as I sit here reading about breast cancer — an unlikely diagnosis for a woman Mara’s age, but also, unfortunately, harder to treat in young women — wouldn’t I like to draw on some inner strength? Isn’t this one reason I study all those spiritual books, and meditate, and pray: to be able to face tragedy and not flinch; to prepare for my own death or the death of a loved one? But keeping the anxiety at bay right now is like telling a drowning man not to panic. The life preserver must be here somewhere, the captain insists.

When Mara was an infant and would wake up crying, I’d wonder whether a dream had frightened her or whether she was frightened to find herself back in this dream we call the waking world. I’d hold her in my arms, trying to soothe her, telling her there was nothing to be afraid of: the oldest lie, the one every parent tells. Well, tonight I’m the one who can’t get back to sleep. This means the gods can’t come to me in a dream, so I have to call to them from this perch of wakefulness and hope they hear me. And if they do, what then? Should I get down on my knees, or face them with fists clenched, ready to rumble? If they want me to beg, sweet Jesus, I’ll beg. If they want tears, I’ll show them how a grown man cries. If they want a piece of me, a bloody chunk or two, no problem. Hearty appetite, I say.

I remember how I tried to bargain with God during the terrible arguments that regularly erupted in my house when I was growing up. As the yelling grew louder, and my parents and grandparents exchanged ever more bitter insults, I promised God that, if he would make the fighting stop, I’d be willing to die ten years before my time — cowering behind the big chair in the living room, not yet ten myself.

Have I been a devoted enough father? When Mara and Sara were younger, there were clearer benchmarks: how much time I spent with them, whether I could provide for their basic needs. Now that they’re grown women, the equation has become more complex. I wonder what they make of me: a man whose approval is still important to them; a man who sometimes treats them like children and sometimes acts like a child himself; a man who, for all his devotion, wasn’t devoted enough not to split up with their mother when they were little girls.

Mara will get the results of her biopsy today. So I need to know: did God get out of bed with a smile on his face, or was his scowl the first indication that nothing is going our way? Maybe he’s not really scowling; maybe it’s just that old tic that’s bothered him ever since he created humans in his own image. Of all his bright ideas, has there ever been one more embarrassing? He feels the heat rising from the crowded cities and the busy, fearful minds that built them. What a feverish people he created. Even elephants know enough to cool themselves on a hot day by stepping into a river. Yet these humans sit behind the wheels of their cars, waiting for the sky itself to burst into flames.

What do you say now, God: my life for hers? I know, I’m old: twice as old as my daughter. Maybe I can bring something else to the table. Maybe your people and my people can work something out.

I dreamt that my cat Nimbus was leading me along a dark passageway. She was a healer, trying to teach me how to spell the word light. Each time I forgot one of the letters and started banging my head against the damp black stones, she reminded me to calm down and pay attention. Eventually I got it right. Then the brightness swallowed me.

I’m on the stationary bike at the gym, going nowhere, when Mara calls my cellphone. “It’s benign,” she says. I hop off the bike. “Benign?” I shout. “Benign,” she repeats. Tears and sweat run down my face. Benign: such a lovely word. I want to break into song. I want to kick up my heels. I want to keep tossing the word back and forth between us like a bright yellow ball on a sunny day.

Yesterday I saw T. outside the natural-foods cafe, looking a lot older than the last time I’d seen him. I’d heard from a mutual acquaintance that he’d been diagnosed with an aggressive form of cancer and didn’t have long to live. Yesterday, though, he was very much alive, sitting in the shade of an oak tree and savoring an orange popsicle. What small bites he took, letting each one slowly melt in his mouth before nibbling at the popsicle again. I thought, So that’s how you eat a popsicle when you know you’re dying. And from a distance I watched him as if I had all the time in the world.

Judith Keenan’s September 2006 cover photograph of someone’s toes protruding from beneath black fabric was intriguing. To learn from the caption that they belonged to a sick man who had asked the photographer to take a few pictures as mementos for his daughter was poignant, to say the least. To learn that he’d died shortly thereafter was heartbreaking.

In the same issue, Sy Safransky’s compact narration of his daughter’s biopsy [Sy Safransky’s Notebook] put all of my petty — and not-so-petty — worries in perspective. I had a similar situation with my son several years ago, so it was doubly meaningful to me.

Andy Hjelmeland Plymouth, Minnesota
More Letters
Thank You Your donations helped to keep our ad-free, nonprofit magazine in circulation last year, funding everything from production to distribution. Learn how you made a difference last year. Learn More 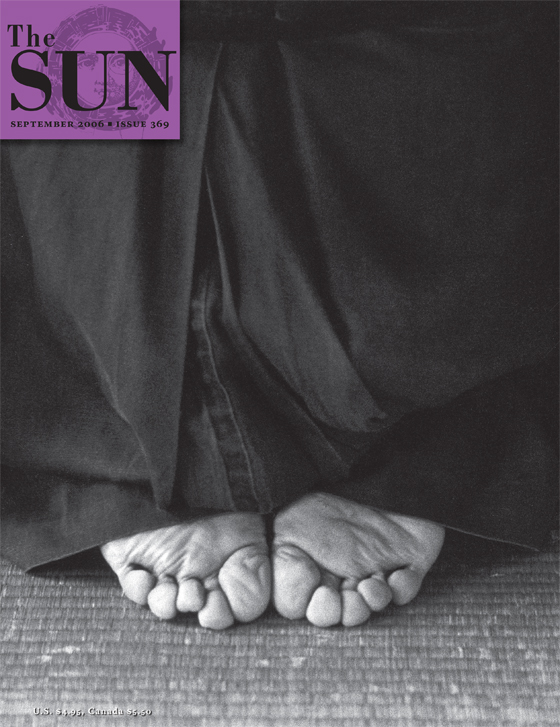 The Temple Of Reason

Sam Harris On How Religion Puts The World At Risk

The Jeweled Net Of Indra