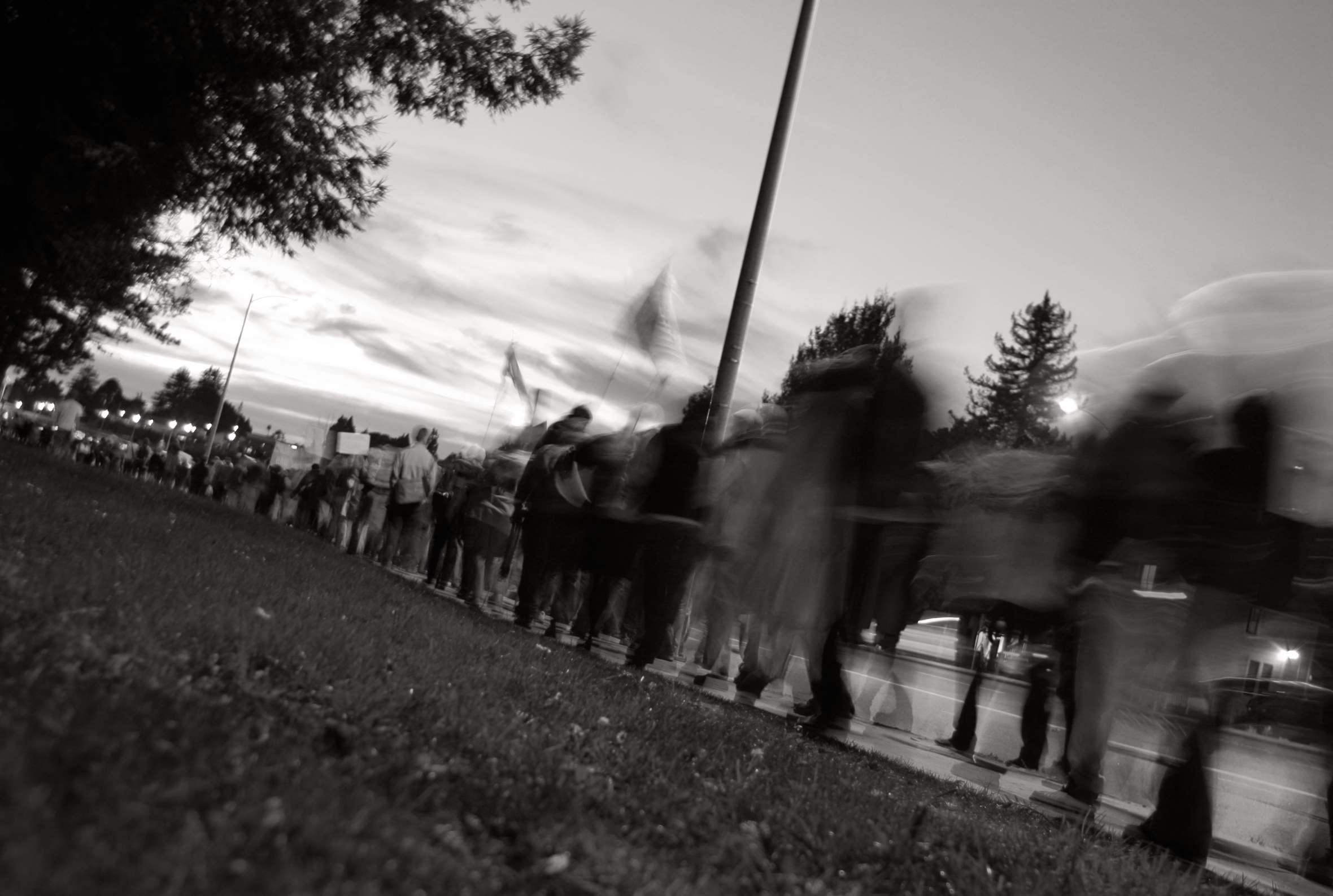 I Was A Guantánamo Prisoner

I walked slowly up Mill Hill Road in Woodstock, New York. A rope tied my feet together; another bound my hands. A third rope, around my waist, was attached to the woman in front of me. A black hood covered my face. The rest of my wardrobe was an orange jumpsuit, like the ones worn by prisoners at Guantánamo Bay.

It was December 10, International Human Rights Day, and a group called World Can’t Wait (www.worldcantwait.org) had arranged for protesters throughout the country to dress as “detainees” — suspects being held without trial in U.S. government–run prisons outside the U.S.

In the line of five prisoners, I was the last, which is probably the easiest role. I had to concern myself only with the prisoner in front of me, and match my steps to hers. Next to us were two of our friends dressed as CIA guards with walkie-talkies.

For the first fifteen minutes I was often giggling. I remembered a scene from the Woody Allen film Take the Money and Run in which a group of men on a chain gang escape from prison together. The police chase them, and Woody Allen turns to the other prisoners and shouts, “Scatter!” Everyone runs in different directions, and they all fall on their faces. Wouldn’t it be funny if that happened to us?

When one of our CIA guards would shout, “Move it, you pigs!” I’d think, Take it easy, Judith.

One prisoner often veered off to the right, as if refusing to stay in line. The guards would snarl at him, and I, too, grew annoyed: why was he making it difficult for the rest of us?

This made me think of a Jewish joke: Two Jews are in a concentration camp, and an SS guard takes them out to be shot. One inmate says to the guard: “I spit on the Nazis! I denounce Hitler! I despise your entire corrupt regime!”

The other inmate turns to his friend and says, “Look, don’t make trouble!”

Almost all of the “detainees” in Guantánamo are Muslim. Years ago, when I traveled in Egypt, I admired the faith of the people there. The entire nation, it seemed, believed in God. Egypt was bathed in prayer. Now, in my role as “suspected terrorist,” I sensed the presence of Allah. Looking down through the black cloth at my feet as they climbed uphill, I was grateful for the gift of human life.

Maybe I should convert to Islam, I thought.

The one frightening moment was when we were crossing the street. What if a car — perhaps driven by a patriotic American who believed we were “defending the terrorists” — slammed into us? I could hardly see through my hood, and I was tied to four other people. I felt as vulnerable as a three-year-old.

“You! Can’t you hear? What’s the matter? You got shit in your ears?” our CIA interrogator shouted.

“This is what the U.S. government is doing to protect freedom and democracy around the world,” the other CIA guard said to onlookers through a megaphone.

One woman on Tinker Street cowered as we walked by, as if we were a row of enormous spiders. Most people just stared, dumbfounded. Perhaps they don’t know we are holding 520 prisoners in Guantánamo with no legal rights, plus an unknown number in secret prisons in Eastern Europe, Thailand, and elsewhere.

When I was young and heard German citizens say they’d “had no idea” about the Nazi extermination camps, I thought they were lying. Now I understand. As your government grows more cruel, you feel helpless and choose not to dwell on the negative. “I never listen to the news,” my New Age friends say. “It’s too depressing.” I’m so happy they’re maintaining their positive outlook.

“Let’s get them to the town green, so they can make their confessions,” one of our guards told the other.

But when we reached the town green, we read these statements (through the megaphone):

Military autopsy reports provide indisputable proof that detainees are being tortured to death while in U.S. military custody.

In December of 2001, the Bush administration . . . authorized the secret seizure, detention, and interrogation of persons and subjected them to torture.

In January of 2002 the Bush administration declared that Geneva Conventions protection will not be honored for the ‘War on Terror.’

In August 2002, the administration attempted to redefine torture to escape liability.

Guantánamo is the festering symbol of this administration’s continued contempt for international law and disregard for human rights, further diminishing our country’s moral standing.

Finally a couple of us had to pee, so we ended our readings. On the way back down the hill, our guards no longer barked orders. We walked more naturally, less solemnly. We were all abandoning our roles.

Returning to Pine Grove Street, I removed my black hood. Everything was so vivid! I had forgotten how engaging and sunny the world is.

Back home, nothing I did was satisfying. The Sunday comics suddenly didn’t seem funny. I put on a postpunk cassette from 1987, but the music was too loud; it lacked finesse.

I was tired, but when I lay down in my bed, I couldn’t sleep. I kept staring at my rolled-up orange jumpsuit on the floor.

This essay originally appeared in the Woodstock Times. The demonstration was designed and directed by performance artist Eeo Stubblefield.

To Look For America

Andrew J. Bacevich On How The U.S. Came To Put Too Much Faith In Military Power