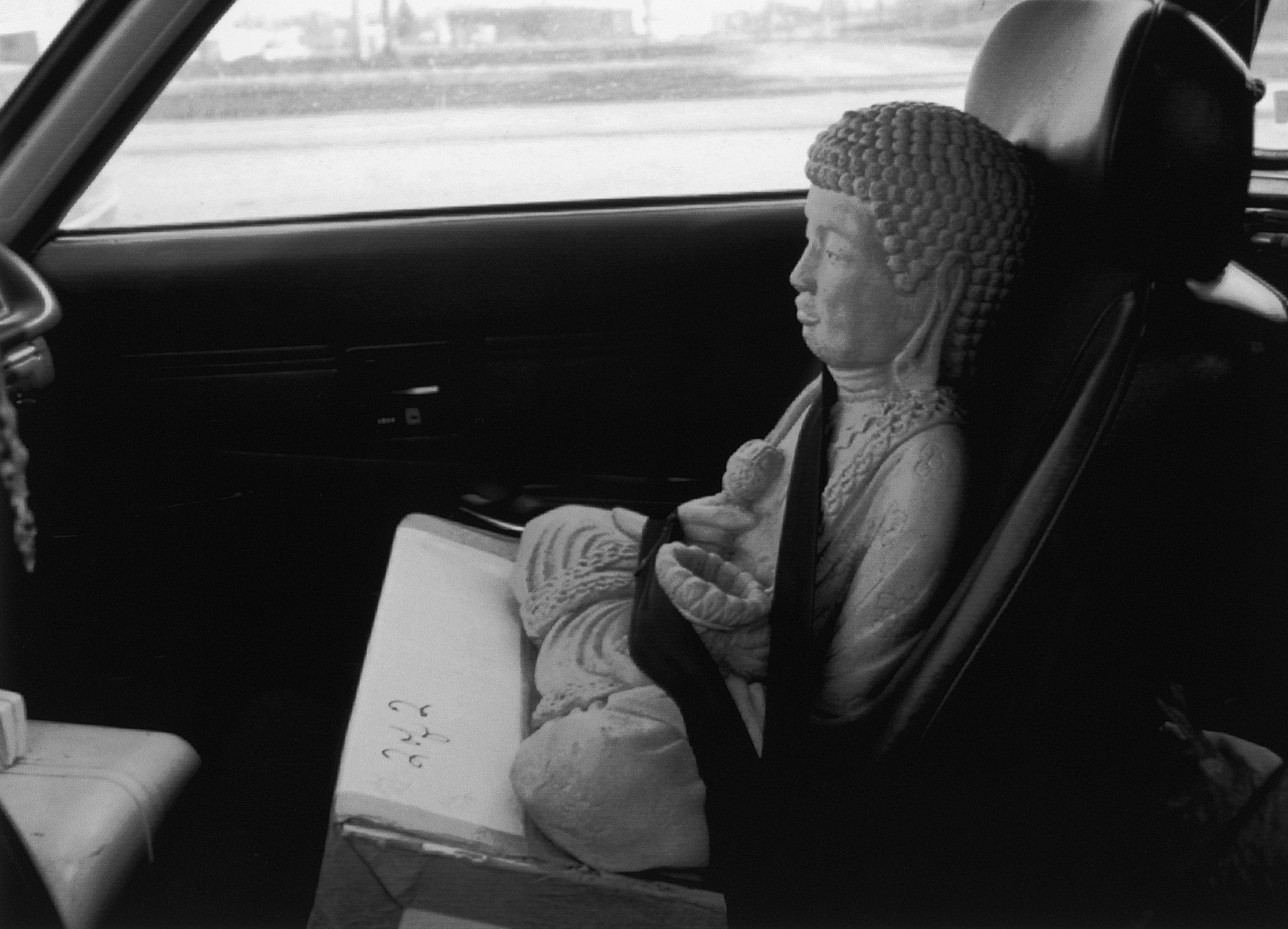 I have walked the few blocks down to the pond on campus tonight because I read in the paper that some Buddhists from the local sangha are going to free the souls of a lot of people who were bombed at Hiroshima. The paper said they are going to put the souls in little paper lanterns that hold lighted candles, and when the lanterns float across the water, this will let the troubled spirits finally float free.

I’m thinking: If it’s that simple, why didn’t they do it sixty years ago? Turns out there’s a reason. (That’s the thing about life. There’s so often a reason.) It seems that a soul has to hover for sixty years first in order for the thing to work. Personally I’m pretty skeptical of any religion that has much to do with the whole numbers dogma. Personally I’m pretty skeptical of any religion, period. Though I have to say, once the Buddhist priest starts crooning, and half the 147 people on the boat dock begin to croon too, and I look up and see the several clouds and feel the bits of wind that ripple tiny riffs across the water, my skepticism dissipates. It melts in the heat of the 146 lighted candles. (I, ever the abstainer, have not lighted one. Why? Perhaps I’m fearful that if I light a candle I may inadvertently join some church.) My skepticism melts in the heat of all the bodies crooning, being crooned to. It takes very little, actually, to dynamite a person’s unbelief. We all sit poised to topple over at the first little cataclysmic miracle. We walk around all day waiting to be duped, healed, made whole and holy, transformed.

Decked out in red and yellow robes, the Buddhist priest (if so he is) says that he will now pray for us, though he neglects to say to whom. I want to raise my hand at the Q and A that follows and say, To whom? using the objective case, though I object to hardly any prayer. Ask: To whom did you pray for us tonight? hoping he will tell me he prays to the god who made the dark-skinned, black-eyed child who dances in a long, bright fuchsia dress at the edge of the boat dock; the god who will be with her till the hour of her death, which ideally will not be tonight, even if she does fall off the edge, because her smiling mother will have the presence of mind to jump in after her and not make her spirit wait the mandatory sixty years. Try to tell a story without numbers in it. Go ahead. Try to make religion number-free.

The priest finishes his prayer and hands the mike off to a woman of the sort who is given to holding microphones on boat docks and passing out petitions and saying, in a voice amplified beyond necessity, that all the mayors in midwestern Massachusetts have signed a declaration saying they are in favor of peace. She is a sturdy woman, given to saying things like this with a straight face, into a microphone designed for karaoke. I make no comment here. I have my hands full with the peace-loving politicians and the prayers.

Then someone reads a poem that I think must certainly regret its own having been written, much less read aloud with people present. And after that someone reads a letter from a woman who was bombed at Hiroshima as a child and bore radiation aberrations for a lifetime. We bombed her body, but not, I think, her spirit, judging from her letter. It is the spirits of her mother and her father and her sisters and her brothers, numbering thousands, we have come to free tonight. Once the letter has been read, we’re done for, and there is no Buddhist god can save us from our sins. We are Americans.

I have a friend named Jasmine who volunteers at her church. This summer she is working with migrant-workers’ children, children of so many languages, though none spoken in voices audible outside the urban ghettos where the migrants sleep, a dozen to a room, the heat inside hardly less intense than in the noonday field. She tells me how one boy, in the little classroom in the basement of the church, refuses the ice cream he is offered, so full of fear and worry is he that his pregnant mother might give birth that afternoon and maybe die. Jasmine tells me of a little girl who does not speak, has never spoken, if Jasmine understands the dialect in which her brother tells the story.

Jasmine tries to teach the children English and explain to them what grammar is and why it matters in their lives. She wants to give them not just nouns and verbs, but participles and phrases, metaphors and similes. She wants them to appreciate how language can be made to penetrate experience and make it into something you can tell someone about. All through one stifling afternoon she teaches them, then finally asks if anyone can give her an example of a simile. A small boy nods and whispers, “The desert is a dragon. It kills babies. It kills their fathers too. I think that is a simile, if it’s not a metaphor.” Then he tells her about the people he saw die trying to reach this place.

Jasmine says if the legislation now in committee ever makes it out, it will be not a felony but only a misdemeanor for a teacher to fail to turn in any child who is in this ohbeautifulforspaciousskies country of ours without proper papers. As if we would, any of us, be here had such papers been required of our people. We are all without papers, and until we recognize that fact, we are well and truly damned.

Jasmine says she took a used TV and an old VCR to the family of the little girl who does not speak. Five strong men stood outside the door and would not let Jasmine in, but took the TV and a fourteen-year-old computer someone had sent along with it, and they said, “Thank you, thank you, thank you,” a hundred times.

And Jasmine is the one who’s helping. This summer she is the only person in America who gets into a car and drives a fourteen-year-old computer to this family in a neighborhood where God’s afraid to go.

Now the woman with the microphone instructs the yellow-and-red-robed Buddhist priests to light the candles in the lanterns. She tells a tanned, athletic-looking woman in a kayak to row gently and pull the lanterns, which are fastened to tiny floats made of styrofoam, all tied together, out across the pond. She says again — I guess in case we didn’t read it in the paper, or forgot — that now the spirits of the people we killed can all go free.

An Anthology Of Chinese Poetry