Before She Sends It

I dreamt that I was in London, offering my business card to English women in exchange for a hug. They seemed pleased to hug an American; I was satisfied with the arrangement, too. Then I met a woman who was visiting from North Carolina. I didn’t come all this way to hug someone from North Carolina, I thought. But I gave her my card, too.

What business was my dream self engaged in? I have no idea. When I lived in London in 1970, I didn’t have a clue what I was doing then, either. “Trying to become a real writer,” my card could have read. Or maybe, “Living between worlds.” I’d been enamored of journalism since I was a kid: editor of my junior-high-school newspaper, my high-school newspaper, my college newspaper; then a graduate student in journalism; then a daily-newspaper reporter in New York City. I wasn’t brilliant, but I worked hard and I was determined. Had I continued, I might have become a success. But I wasn’t interested in that kind of success, given the compromises I’d seen demanded of others and knew would be demanded of me: This much truth, Sy, but not that much truth. You don’t want to start a revolution, do you? So I quit and hit the road. After a couple of years of traveling, I ended up in North Carolina where, not long afterward, I started The Sun, which was a way of fomenting a revolution in my own life, at least.

The dream reminded me that, at sixty-two, I’ve spent the better part of fifty years as a writer and an editor. I guess I should be impressed, but I tend to be suspicious of authority, even when the authority is me. There may be no substitute for experience, but experience can never be a substitute for living fully in the present. I can take pride in all the back issues of The Sun on my shelf, but I can’t take refuge there. My passion for this work lives in the here and now, not in the imagined future, not in the romanticized past, and not in the story of The Sun: an astonishing story, genuinely inspiring — just a story. Passion doesn’t live in the story. Nor does it live in the satisfied smile of a maverick publisher taking a bow. Well, if that’s what you want . . . , Passion says, slipping out the door.

So how do I keep my passion alive?

By honoring life in its particulars — not literature in the abstract but this story on this page. This issue. This deadline.

By noticing the waiter at the Turkish restaurant near the office, a young man with a face so kind that I can easily imagine him soothing mourners at a funeral, or losers at a racetrack, or God himself on a bad day. When I told him recently how much I appreciated his good-natured demeanor, he smiled and shrugged. “Well, I have no complaint with life,” he said. “So why cry?”

By allowing hope to rise in me; that’s the nature of hope.

By remembering that hot air rises, too.

By reminding myself regularly of The Sun’s motto: “What is to give light must endure burning.” I doubt that those words would mean much to me if they’d been written by a young poet who’d just returned from a weekend vision quest. But they were written by Viktor Frankl, an Austrian psychiatrist who, with his wife and parents, was deported to a Nazi concentration camp in 1942. As Frankl was transferred from camp to camp, his wife, his father, his mother, and virtually everyone else in his immediate family were killed by the Nazis. The suffering he experienced and witnessed taught him that even in the most painful and dehumanizing situations, life has meaning, and therefore even suffering is meaningful.

By accepting the fact that I’m a slow writer — slower than the school bus you’re stuck behind in heavy traffic when you’re late for an important appointment and really need to pee.

By being aware that what is fundamentally mysterious doesn’t become any less mysterious because we’ve put it into words. “Words, words,” writes the poet Robert Creeley, “as if all worlds were there.” Which is to say, a menu won’t fill our bellies; a love poem isn’t a kiss.

By knowing that right now a young woman is yawning because she was up most of the night finishing a story — the first draft, anyway — and soon it will be time for her to go to work; and this story, which she wrote while I was sleeping, will sit on her desk for a week before she has a chance to look at it again. During that week, there will be flooding in southeast Asia, and two impoverished nations will go to war over a minor border dispute, and an elderly man who lives across the street from the writer — a man who can’t remember the last time he prayed — will feel God’s hand on his shoulder. But this is only her first draft. She’ll rewrite the story three times before she sends it to me.

After a long, hard night in the sweat lodge and before I started a thirteen-hour workday, I let myself have a moment to enjoy The Sun — and received a slap in the face. In his essay “Before She Sends It” [December 2007] Sy Safransky comments on the quote from Holocaust survivor Viktor Frankl that serves as The Sun’s motto: “What is to give light must endure burning.” This quote has always spoken to me, never more so than that morning, after a night during which I’d hauled thirty stones for a grueling three-hour sweat. But then Safransky writes, “I doubt that those words would mean much to me if they’d been written by a young poet who’d just returned from a weekend vision quest.”

Why would that have invalidated those words? What’s wrong with young poets and “weekend” vision questers?

After a childhood filled with murder and suicide and an adulthood spent struggling with alcohol and drug addiction, I have worked hard to find a spiritual path with meaning and heart. The fear that others will judge my path harshly has led me to keep it private. To have it sneered at in what I had thought was a like-minded magazine was shocking and disappointing.

My first thought was to drop the magazine in the trash, cancel my subscription, and then kill myself and have my headstone read, “Sneered at by Sy Safransky.” Consider the first two actions done and the third as my attempt to laugh at the situation.

Jennifer Carroll Seattle, Washington
More Letters
Thank You Your donations helped to keep our ad-free, nonprofit magazine in circulation last year, funding everything from production to distribution. Learn how you made a difference last year. Learn More 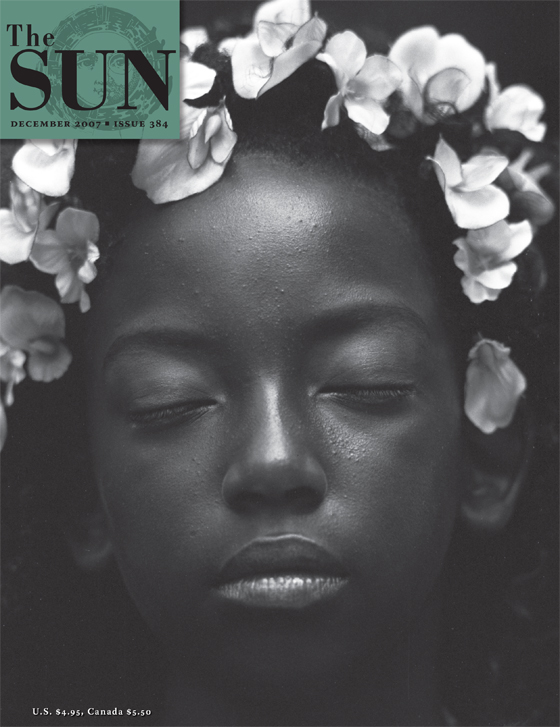 The Wizard In The Closet

By Heather Sellers
The Sun Interview

Who Hears This Sound?

Adyashanti On Waking Up From The Dream Of “Me”