The laws of suffering haven’t changed, but every morning I stand before God and make my case. Yes, that God, the one with whom we’re all on a first-name basis, whether we believe in Him or not. Here in the church of morning, I’m a believer. Maybe that’s because it’s dark when I wake up, and the sun always rises on time.

One of my neighbors is an avowed atheist who disparages beliefs in the supernatural. But if she misplaces something, she asks her dead husband where she left it. When, as is usually the case, she then finds what she’s looking for, she chalks it up to “pure coincidence.” This reminds me of a joke a friend told me recently: A lapsed Catholic named Michael had an important meeting and couldn’t find a parking space. Looking up to heaven, he said, “Lord, take pity on me. If you find me a parking space, I’ll go to Mass every Sunday for the rest of my life.” Miraculously, a parking space appeared. Michael looked up again and said, “Never mind, I found one.”

On Thanksgiving Day, I’m grateful to the Big-time Spender who hurled all the stars into space. I’m grateful to the astrophysicists who admit they don’t understand dark matter or dark energy, which together make up 96 percent of the known universe — grateful for their humble acknowledgment of how little they know. (Of how many learned people can I say the same?) I’m grateful for the joke factories in outer space, visible only to those with a sense of humor on nights when the sky is clear. I’m grateful for the run-on sentence that has given birth to all the writers sitting in crowded cafes waiting for the next word and the next.

Still, I resisted. What could one more demonstration possibly accomplish? It’s true that antiwar sentiment helped sweep many pro-war Republicans out of office in 2006. But what good did that do, since practically every time President Bush throws a tantrum over war funding, Congressional Democrats write him a check? Maybe they’ve reasoned that their victory in the midterms had less to do with their Johnny-come-lately antiwar stance than with the ethical scandals that afflicted Republicans like a host of Old Testament plagues. Maybe they’ve decided that it would have taken an act of divine intervention, or vote-tampering on a scale beyond even Karl Rove’s impressive abilities, to save the Republicans from the thumping they received. Maybe they’ve concluded that a winning strategy for 2008 is to keep wringing their hands about the war while continuing to pay for it.

Then I recalled something the journalist Molly Ivins wrote just before she died: “We are the people who run this country. We are the deciders. And every single day, every single one of us needs to step outside and take some action to help stop this war. Raise hell. Think of something to make the ridiculous look ridiculous. . . . We need people in the streets, banging pots and pans and demanding, ‘Stop it, now!’ ”

A reader scolded me recently for putting too much trust in the Democratic Party leadership and then feeling betrayed. It’s obvious, she wrote, that “the war machine wears both party ties.” I wonder: Do I feel betrayed? Not like a groom whose bride backs out of the wedding at the last minute. Not that kind of betrayed. Maybe more like a groom whose bride shows up an hour late because she was entertaining the CEO of Halliburton in her motel room. The room with the waterbed. That kind of betrayed.

I dreamt that I was a sixty-two-year-old man, an “American” who lived on a modest-sized planet called “Earth” circling a medium-sized star called the “sun” in a galaxy called the “Milky Way,” which was also the name of one of my favorite candy bars when I was growing up. You’d think this might have led to some confusion. In the dream, however, I was much more befuddled by the actions of my fellow “Americans,” not to mention the other warlike tribes that had divided up the planet. For that matter, I was often bewildered by the simplest interactions between myself and the fifty-two-year-old woman, also an “American,” with whom I lived in “holy matrimony.” Even more surprising were the arguments I had with myself, as if my mind were a war zone in which I sometimes couldn’t tell the good guys from the bad guys. Now and then, I’d listen to lectures by “spiritual teachers” who suggested that I wasn’t really who I thought I was, and that if I stopped identifying with an illusion called the “self,” I’d wake up and experience a radiant peace beyond understanding — right there on Earth, circling a medium-sized sun, in a candy bar full of stars. 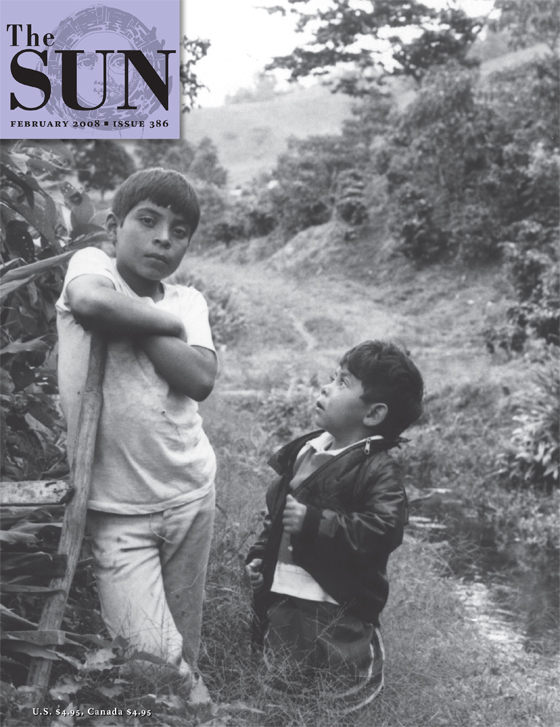 You Are An Awful Parent

By Krista Bremer
The Sun Interview

Paul Stamets On The Vast, Intelligent Network Beneath Our Feet