I’ve hiredenough people over the years to know that no matter how closely I scrutinize résumés and check references and pay attention to what is (and isn’t) said during an interview, I can never be certain I’ve chosen the right person until he or she is on the job. So today, with just a couple of weeks to go before the inauguration, it’s probably prudent for me to reserve judgment about whether Barack Obama will be a great president, or even a good one. Nonetheless, I’m hopeful, probably more than I have a right to be, given the wreckage the Bush administration has left behind. Maybe I’m still feeling buoyed by Obama’s stunning victory, as transcendent a political moment as I’ve experienced in decades. Maybe it’s because of the man’s formidable intelligence and political adroitness and oratorical brilliance and calm under pressure. Maybe it’s because Obama’s rise to power evokes an ancient myth: the hero of humble birth who surmounts enormous odds, vanquishes his foes, and liberates his people.

Whatever the reason, I’ll put my money on his being great. In a way, I already have. Last fall Norma and I watched our retirement fund do a back flip off the diving board and smack its head, hard, on the side of the pool. Then, as the stock market kept falling and Obama’s poll numbers kept rising, it became apparent that the spiraling economy would seal the deal for him. So I decided that, instead of bemoaning our loss, I’d view it as a “campaign donation.” Admittedly, it was an exponentially larger sum than we ever would have deliberately contributed. But if this was what it took to save the Republic, I figured, it was money well spent.

And now Obama is about to take possession of a 233-year-old country that’s been looted and vandalized — plumbing broken, wiring stripped, floorboards ripped up, roof caved in. Still, everything’s a fixer-upper if you’re willing and able. I’m confident that Obama will put in a full day’s work, and be willing to stay up past his usual bedtime if a Category 5 hurricane is heading our way. I have no doubt he’ll actually read the daily national-security brief that gives the president such helpful information as “Bin Laden Determined to Strike in U.S.” And I imagine he’ll be somewhat less devoted to leisure than his predecessor, who, according to the latest Harper’s, spent one-third of his presidency at or en route to vacation spots.

Truthfully, I don’t care how much time Obama spends on vacation, as long as he shows us that he can back up the rhetorical flourishes that make a speech memorable with the ongoing, often unmemorable, and decidedly more arduous work of governance. Instead of being a symbol of change, as he was during the campaign, he must become an agent of change, pivoting from his moment of victory to the mundane, day-to-day challenges of pushing legislation through Congress; of compromising on tactics but not principle; of listening to his advisors, but never forgetting how Lincoln responded when he polled his cabinet on a particular issue and found that all eight members opposed him. “Eight nays, one aye,” Lincoln said. “The ayes have it.”

In my wildest dreams, Obama will start by making our ransacked home livable, with a solid floor beneath us, so that no one needs to worry about falling through the cracks or going hungry or being homeless or not having access to healthcare. Then he’ll ensure that the parlor is off-limits to lobbyists, the bedrooms are off-limits to moralists, and the basement workshop is off-limits to anyone who wants to make a buck selling weapons to the rest of the world. And, after the thick green scum is cleaned off, he’ll see to it that the pool is off-limits to bottom feeders trying to unload mortgage-backed securities on people who are drowning. And then he’ll install solar panels on the roof, so we don’t need to invade other countries for oil, then lock ourselves in the bathroom and vainly try to wash the blood off our hands. Oh, one more thing: now that he’s convinced enough Americans that he’s not only patriotic but the kind of regular guy with whom they’d be comfortable drinking a glass of sauvignon blanc, maybe he can finally take off the flag lapel pin and stop dropping his g’s.

In the weeks leading up to the election, I must have checked the tracking polls as frequently as a nurse monitors the vital signs of a critically ill patient. Right now, however, there’s no oracle to tell me whether my faith in Obama will be borne out. So, in an attempt to stay as levelheaded as our new president, I remind myself that whether he governs well or poorly, winter will turn to spring and spring to summer. The narrow gate will be no less narrow. Loving my neighbor will still mean loving my neighbor — yes, that neighbor. Blessings in disguise will remain disguised until they’re good and ready to reveal themselves. I remind myself that, after the Honorable Barack H. Obama stands on the steps of the Capitol on January 20 and pledges to “preserve, protect, and defend the Constitution of the United States,” babies will still wake up crying at two in the morning. I remind myself that the call of the humpback whale will still be heard from five hundred miles away. And nothing I tell myself matters. It’s true, all of it, but not the least bit reassuring — because the air is thick with smoke and the waters are rising. Barack Obama, it’s up to you.

In his February 2009 Notebook, Sy Safransky writes, “Barack Obama, it’s up to you.” But Safransky is mistaken. It isn’t up to Obama at all. It’s up to us, the commoners, just as it has always been. If we continue to sit back and watch and wish, things will be worse than if we mouth off and act up. Unless we make the new president uncomfortable enough, he is not going to rediscover equality under law. Did Safransky pay any attention to whom (I want to say “what”) Obama stacked his cabinet with? War and Wall Street will be well served.

The most foolish example of “hope” I saw during the campaign were the Obama signs with peace symbols on them. This, for a man who has promised more war and increased military spending.

No, it doesn’t depend on him. If we want to reclaim our republic, we must stop being passive and looking to “leaders.”

Dan Raphael Portland, Oregon
More Letters
Thank You Your donations helped to keep our ad-free, nonprofit magazine in circulation last year, funding everything from production to distribution. Learn how you made a difference last year. Learn More 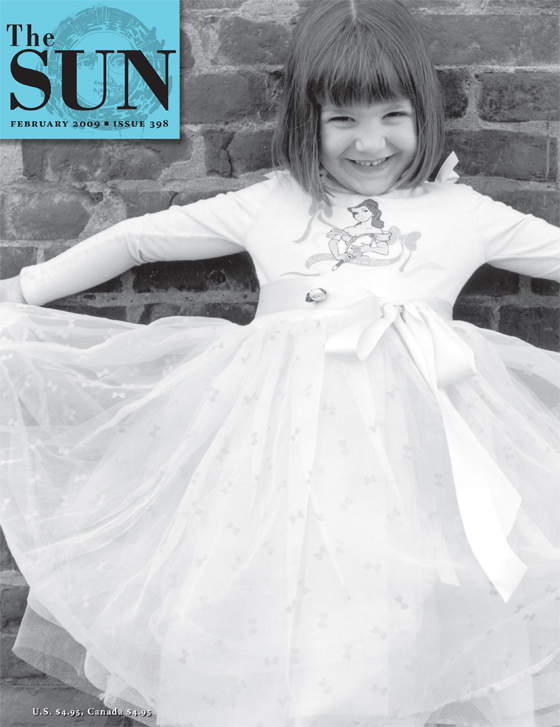 By Joseph Duemer
The Dog-Eared Page

By Stephen and Ondrea Levine
Poetry

Facing, For Once, Where I’m Going