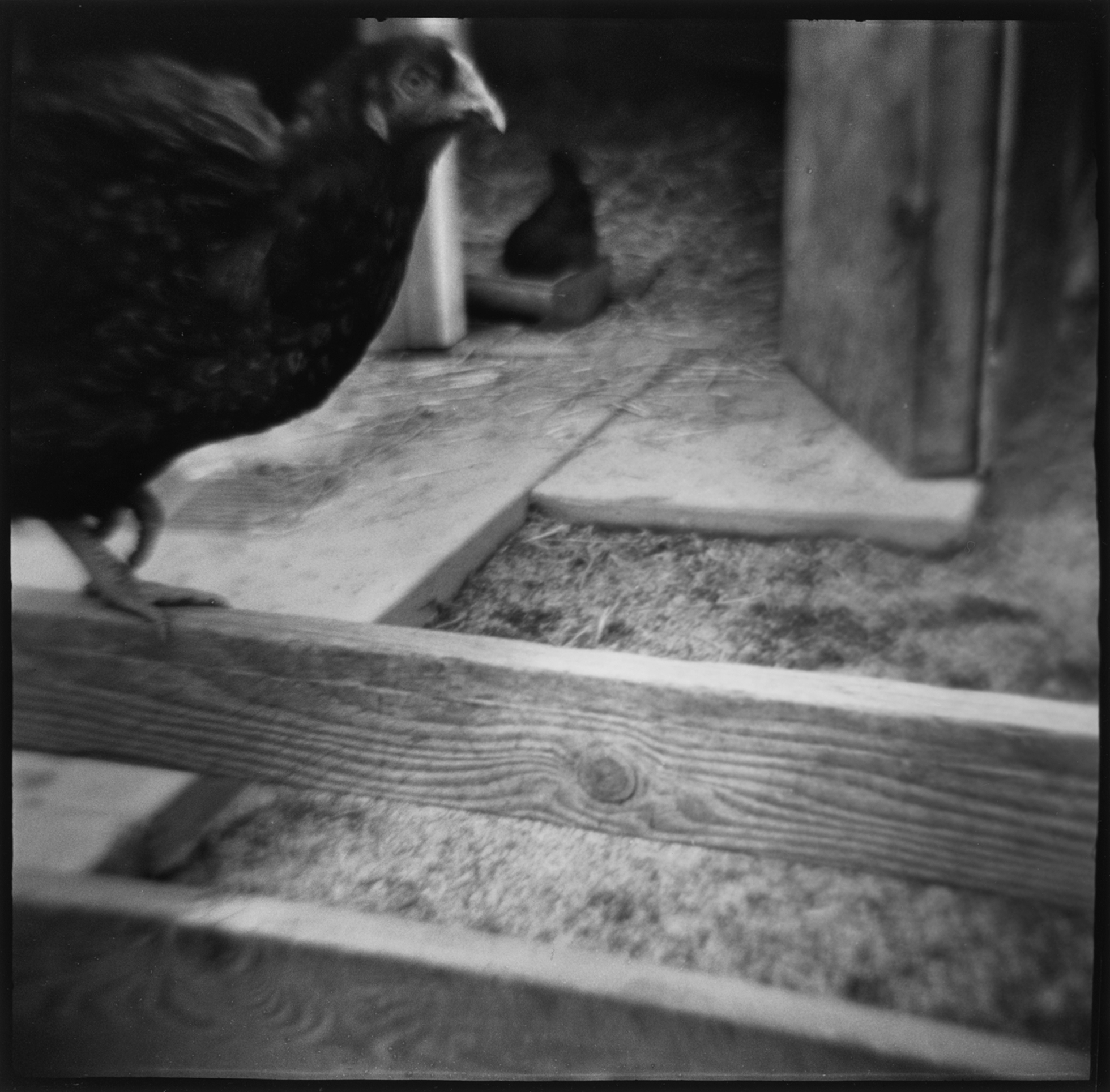 to a poet friend i helped marry, who, at the time of this writing, had two small kids named for irish heroes, a newly bald head, a fresh hysterectomy, a collapsed and recalcitrant lung, and (hundreds of us prayed) no more ovarian cancer.

when i woke just past dawn, the house was quiet, and a late-spring snow was falling. i made coffee then strolled outside and opened up the coop. the hens filed out, clucking in their gossipy way, and the rooster rushed self-importantly forward to call them to bits of food they could have better found without him. but when i checked inside the coop, the blond banty was again hunched deep in the darkest nest box. she’s been broody for weeks, enthroned on a batch of eggs visible to no one but herself. if we pick her up and urge her outside, she remains bunched in that broody posture, making sad little mothering sounds till we place her back in her dark box. on easter morning our daughter celia couldn’t stand it: she took the hen out in the yard, set her in green grass and bright sunshine, and told her to enjoy life. the hen then hunkered for hours where celia had set her, looking as if someone had made off with her legs.

you might fear i’m going to be ham-handed and say that this hen reminds me of you. shit, M, i wouldn’t do that. she reminds me of me. due to the kind of winter i’ve had, i call her “the novelist.” “good chicken!” i say each time i lift her and ponder the brood she’s creating out of nothing. “ignore the detractors. invisibilities need parents too. long live fiction, little sister.”

this morning, though, the coop seemed so dark and lonely that i, like my daughter, hoped the novelist might ease up on her obsession and begin to recall the charms of the world. so i left the coop door open before strolling back to the house. i then poured more coffee, took my usual chair at the window, and began reading a book of poems by my friend chris, who is your age and a fishing guide by trade, so his angle on the world feels like drifting quietly downriver in a boat. i read:

then i noticed, out the window, a wild turkey gliding through the turkey-colored duff toward the open coop. there was a trough of feed and a blue bucket of fresh water in there. the turkey looked large and purposeful. the novelist was small and helpless. see how life flies at us, M? see how impossible it is for you poets? before chris, whose work i love, could finish singing about crags coming closer in fog, then even closer over water

i was tossing him facedown on the coffee table and humping it across the yard to close up the coop and protect the novelist.

as i drew closer, though, i recognized this turkey. the sense of threat vanished. this was the lone female who, two months earlier, had been struck by a vehicle on highway 12. we didn’t see it happen. we just noticed a turkey in the distance one day, walking with a severe limp, carrying what looked like a purse. across the pasture from us the effect was charming: old grandma turkey and her little purse, like something out of beatrix potter. closer, the charm vanished. the impact had peeled the skin of her entire chest back to exposed muscle but had failed to remove the skin, which now hung so low it dragged the ground. can a turkey whose purse is the former front of her body continue to live? we wondered.

every day for weeks she answered, yes. and the reason i didn’t recognize her this morning till she turned and revealed the purse is, she no longer limps. the purse is growing smaller, and new gray down coats her chest the way it coats week-old turkey chicks.

i still closed up the coop to protect my totem hen, but as i turned back to the turkey, i felt whatever it is we feel when we say, my heart went out. my heart went out, M. then there you were, nowhere visible, yet present in a way that made me turn to the spring snowflakes and whisper, live forever.

On a flight from Miami to Boston, I was catching up on back issues of The Sun when I happened upon David James Duncan’s “my heart went out” [December 2010]. I only barely managed to keep from bursting into tears on the plane. This is the danger, and the pleasure, and the reason for reading The Sun: you never know when you’re going to be blindsided by something so real and so human.

Elizabeth Menser Harwich, Massachusetts
More Letters
What Do You Think? We love getting letters to the editor for our Correspondence section.
Has something we published moved you? Fired you up? Did we miss the mark?
Send A Letter

By Tony Hoagland
The Dog-Eared Page

excerpted from
Letters To A Young Poet