How did a nice Jewish boy like me end up with a stern Protestant work ethic? I take vitamins and go to the gym regularly. I defend the Constitution and signal before I turn. I’m in bed by ten most nights and up at five to exercise my right to be an overachieving American. Is this because I’m devoted to The Sun or to my own self-esteem? Who have I been trying to save with my Herculean labors: the world or myself?

Sure I work hard. So do many other people. I try to remember something my friend Robert once said: “All those doctors who complain that they worked so hard in medical school — compared to who? Someone who digs ditches all day? Someone who works two shifts at McDonald’s?”

Courage fails me. I want the easy way out: a long morning in bed with no decisions to make except how long to kiss Norma; no writers to disappoint; no readers to grumble that my forlorn expression will drive the country into a major depression. I don’t want to be there when the indictment is handed down, just like yesterday and the day before. Guilty as charged, your honor. Yes, I’m working too hard. Yes, I’m not working hard enough.

I dreamt that I’d been drafted and was adjusting to military life. Since my drill sergeant looked like Tony Soprano, the television Mafia boss, I kept my opinions about the war to myself. If I angered the sergeant, I’d be sent to Afghanistan, and who would take care of my cats? Sergeant Soprano wasn’t a man who loved cats too much.

When I woke up, I felt relieved that I’d escaped military service in this lifetime — unless a decision is made to bring back the draft and conscript the elderly. If men in their sixties run marathons, they should be able to chase after the mujahideen, shouldn’t they? If they lift weights at the gym, they should be able to shoulder a fifty-pound pack. If they boast that they feel like a million bucks, and trade in their Camrys for vintage Corvettes, and spend more on Viagra every year than an Afghan farmer makes growing poppies, why not ask them to defend the homeland? Aging hippies who once burned their draft cards and marched against the war would find out whatever became of those idealistic young men.

My cats Franny and Zooey are in my study, grooming each other. Then they start wrestling, until Zooey gets rough and Franny bolts from the room. That’s when Zooey begins wailing, the ballad of one more bewildered male who can’t figure out why his sweetheart ran away. If there were a radio station for cats, Zooey’s song would be in the Top Forty, and he’d be overwhelmed with e-mails from girl kitties whose hearts would go out to our bereft and handsome tomcat. But Zooey couldn’t care less about their marriage proposals, and he barely glances at the nude kitty photos they’ve sent. It’s Franny he wants, with her short gray fur and shockingly white paws. Franny with her salmon-pink collar. Franny with her sea-green eyes. He’s a one-cat cat, Zooey is.

I swore not to sentimentalize my cats, to relate to them not as pets but as fellow creatures. But I regularly forget, just as I’m prone to do with my grown daughters, also once my kittens.

That Norma and I still delight in each other’s company is a miracle I foolishly take for granted. But I know it’s a miracle because I know I’m a mess: fiercely possessive, ridiculously controlling, hopelessly dependent. Let’s face it, decades of “working on myself” hasn’t gotten me very far. I’m like a guy with a rusty car that’s been on blocks for longer than anyone can remember, yet whose engine he still imagines he can rebuild — if only he had the right parts, if only he had the right tools, if only he had a user’s manual written in a language he could understand.

Loneliness paid me a visit yesterday — me, a happily married man! She stood at the door and knocked. I pretended not to be home.

How effortlessly I move through the days of my life. I get into bed at night, go to sleep, and wake up one day older. The earth doesn’t ask for my permission to keep turning.

So here we are, my long-dead son. Thirty-eight years have come and gone. For three days you struggled to stay alive. I buried your ashes. I looked for a sign. The years march on. Now I’m sixty-five. I still search for answers. I read between the lines. But the Mystery’s the Mystery. We can laugh or we can cry. Sweet boy, you’ve been gone a long, long time.

One of my favorite features in The Sun is Sy Safransky’s Notebook. He faces his terrible blank page every morning with all the enthusiasm of a cow being led to slaughter. But, with fear and trembling and a gift for laughing at himself, he fights the good fight again and again. Reading his battle communiqués, I shuck off my own self-doubt for the umpteenth time and believe that I can write a good sentence or two.

I had to smile at Sy Safransky’s suggestion that the elderly be conscripted for military service [Sy Safransky’s Notebook, April 2011]. I was reminded of my eighty-five-year-old father’s prescription for world peace: reinstitute the draft but require all soldiers to be eighty and older. With their frequent naps, difficulty lifting a weapon, and general hobbling around, not much fighting would get done.

Kathleen Edwards San Anselmo, California
More Letters
Thank You Your donations helped to keep our ad-free, nonprofit magazine in circulation last year, funding everything from production to distribution. Learn how you made a difference last year. Learn More 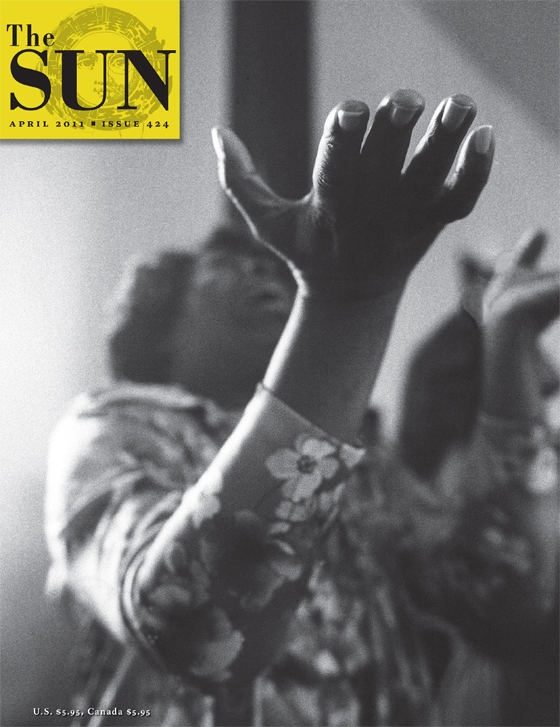