His Weirdness | By Brian Doyle | Issue 428 | The Sun Magazine
close

A friend of mine is dying in the fast lane, he says, smiling at the image, for no man ever loved as much as he did zooming those long stretches of highway in the West, where there are no speed limits or curves or cops and nothing to kill you but sudden antelopes. But now he can see his exit up ahead, he says, and he has slowed down to enjoy the ride. He’s been pondering the sparrows, who do not sow and neither do they reap, he says, shuffling into his yard armed with fistfuls of seed.

The woman who loves him watches him go, smiling. There are so very many tiny things that are exactly him and no other man on earth, she says: When he shaves his neck every other day he bangs his razor against the right side of the sink, and there’s a little tiny scatter of hairs, which drives me stark raving insane, because never once in forty years has he remembered to rinse that off, despite one million promises to do exactly that. One time I wrote the words clean the sink! actually in the sink, with a big red arrow pointing to the place where he bangs his razor, which made him laugh so hard I thought he was going to lose a kidney, which he didn’t, nor did he clean the sink. Also he has a pair of boxers that are so incredibly ancient and threadbare you can, I kid you not, see through them. It’s like eight threads with a waistband holding them together, but God forbid he throws them out. I have pointed out to him that this article of clothing is no longer serving the purpose for which it was designed, but he won’t let them go, which tells you something about his commitment, or his craziness. Also he has a weird habit of slicing off the crust of a loaf of bread an inch at a time, which drives me stark raving insane, each piece the size of a quarter, which leaves a naked, crustless loaf of bread on the table, and who wants a loaf that looks like a skinned snake? Also even before he got sick, he shuffled, you know? He never lifts his feet. The kids and I always thought it was because he’s distracted all the time. There are ten things going on in his head at once, and walking properly is just not on his priority list, walking is something he can do on autopilot. But it sounds like there’s a rhinoceros in the hallway, and after you hear that ten thousand times, you want to shriek, My god, will you walk like a normal person! But he’s not normal, you know. That’s the point. Also he hums all the time, and he doesn’t hear it. Every day a new set of songs. Lately it’s all Beach Boys, all the time. He says he used to get in trouble in school when he was a kid because he would be humming during tests and exams and driving the other kids and the teacher stark raving insane. Same thing happened at work, he says: he would be in meetings with his soundtrack going full blast, and after a while he’d wonder why everybody was staring at him. I have been listening to his humming for forty years, and, me personally, I think Van Morrison is the all-time playlist champion, although there was a long stretch there, two or three years, where it was mostly West Coast jazz, Chet Baker and Art Pepper and stuff like that. See, that’ll all be gone when he goes, and that’s what makes me cry at night. Mostly we just try to enjoy the time we have left, but sometimes I think ahead to when the sink will be totally clean in the morning, and that will be awful, or the bread won’t have white holes where he’s cut off pieces of crust the size of a quarter. What kind of raving lunatic would do such a thing? Only him. People think what we’ll miss most is his humor and kindness and all that, which sure we will, but lately I think what we’ll miss the most is his weirdness. His weirdness is what he was. Everybody else saw him as a good guy, but we saw him as the humming rhinoceros in the hallway, you know what I mean? And sometimes I get really scared of waking up in the morning and not hearing that stupid shuffle. I hate that shuffle. I love that shuffle. That’s as close as I can get to what I am trying to say.

Let’s go feed the sparrows with him. You will not be surprised to hear that he has a weird thing going with feeding the birds: a different seed every week, and he keeps track of which ones they like. He has a piece of paper pinned up on the garage near the bird feeder with his charts on it and also, God help me, a section for comments from the birds, with a little tiny pencil. I told you the man was a total nut. Did you think I was kidding? I was not kidding. What kind of man would go to the trouble of making a pencil exactly two centimeters long? It works too. He tested it, of course. And it tells you something about him that, deep in his heart, he wouldn’t be surprised if someday he shuffled out to feed the birds and found a tiny complaint written there. Nobody who ever lived would be happier to find a complaint from the sparrows about the seed of the week, believe me. He’ll probably write a little tiny reply from the management, you know? With a promise to do better.

They say that timing is everything. When I went into the kitchen this morning, I spied food scraps in the sink. No matter how many discussions I have had with my husband about this, he always forgets to clean up. It drives me mad.

In a huff, I picked up The Sun, went into the bedroom, and read Brian Doyle’s piece “His Weirdness” [August 2011], about a wife who will miss all her dying husband’s irritating quirks after he’s gone. Tears began to flow down my cheeks. Since reading that essay, I look at the dirty kitchen sink and feel gratitude that my husband is healthy, vibrant, and very much alive.

Michele Boccia Central Islip, New York
More Letters
Thank You Your donations helped to keep our ad-free, nonprofit magazine in circulation last year, funding everything from production to distribution. Learn how you made a difference last year. Learn More 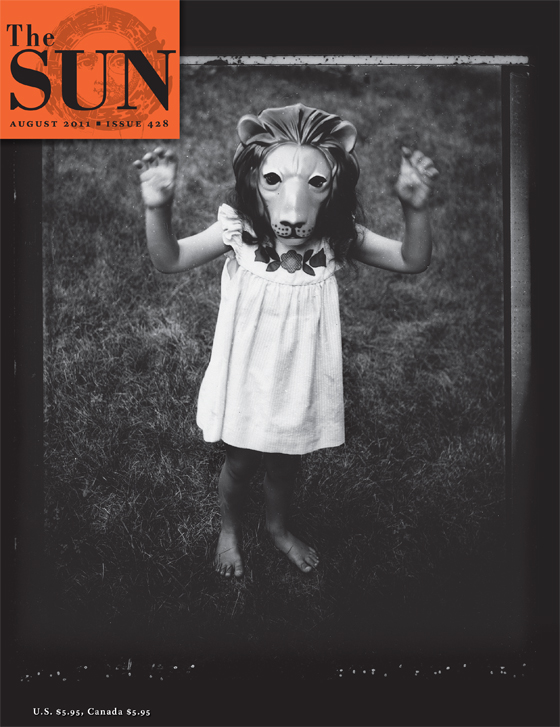 Leaning Back In My Chair, Feet Up On The Garden Table