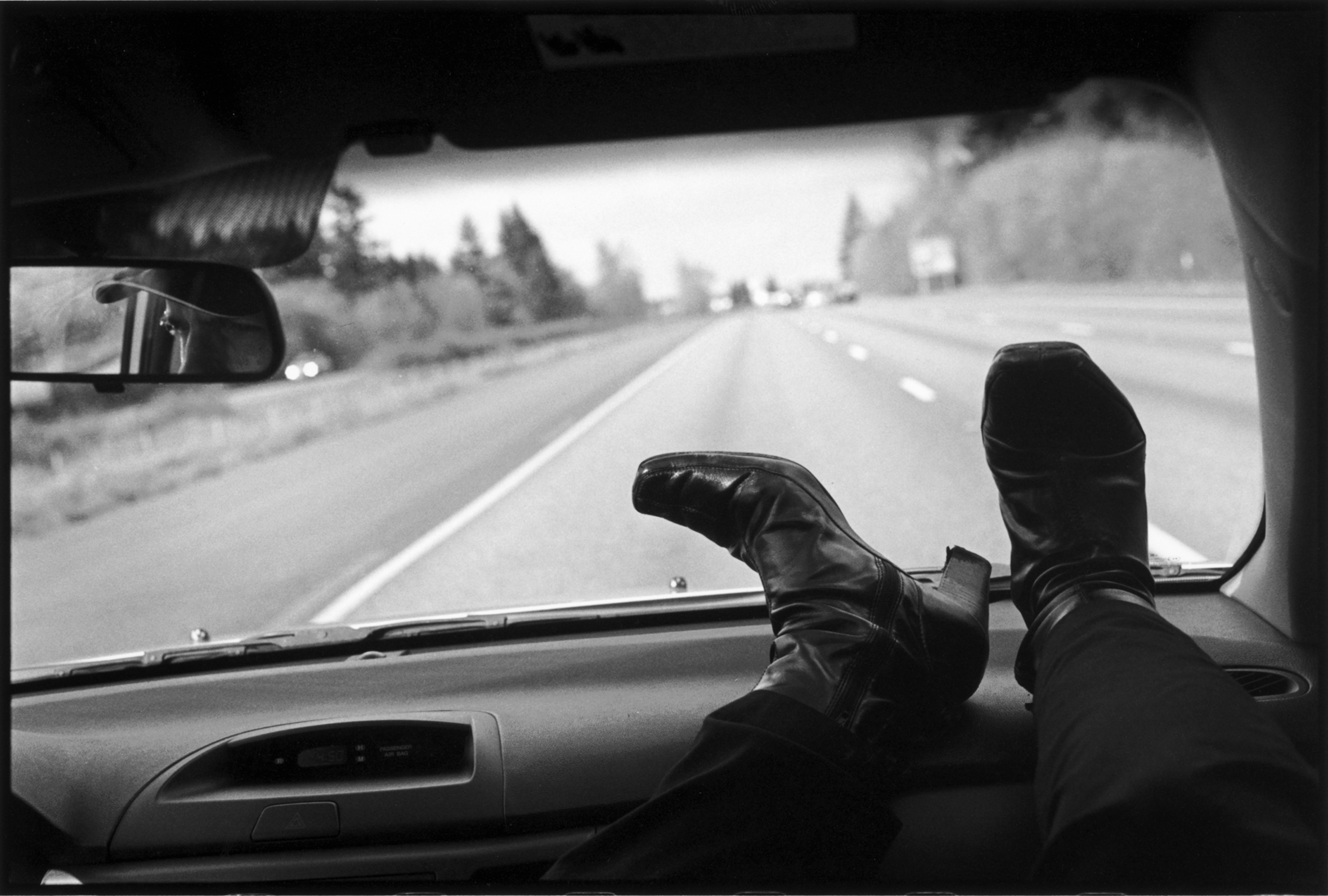 Let’s say we have a man and a woman.

Though, to be honest, judging by the cheatgrass spiking the ditches, those four cow skulls nailed down a fence post’s crooked length, and the great bluescape of sky, it might be Wyoming, or Montana, or a Dakota — any of those dun-colored, too-wide-open, go-crazy-you’re-so-lonesome places in the middle of America.

But we’ll say Nebraska. We’ll say the Chevy’s a faded green and has a beat-up topper on the back. We’ll say the plates are nearly mudded over, the engine cranked up to a high whine. We’ll say some things fell through back home, and they’ve heard there’s work in Fort Collins. We’ll say they’ve been on the road a long few days. We’ll say that in the cramped cab of the Chevy they’re close enough to touch, but they’re not touching.

He drapes one hand over the wheel, reaches the other out to her, palm up, like he’s trying to make a point, like he’s trying to come to the point — but she’s not listening. We don’t even have to say that. You can see it in the way her gaze has gone as flat and vacant as these plains. See the sunburnt angle of her jaw? That quick tremble of her lip? For her sake let’s say that, finally, he shuts up.

He smokes cigarette after cigarette, each one burning down faster than the last, and as the miles streak by, she has retreated to some dark place behind her eyes. It’s probably fair to say they’ve had it hard. Not only the four hundred flat, aching miles they’ve come since sunup in Sugar City, but his drunk father, her drunk father, the job he walked out on and wishes he had back, the two semesters she tried at state college and will pay for until she’s thirty-seven, that thing he did so long ago in the night, that man who grabbed her wrist, the friend who loved him and whom he treated cruelly, the sister she let make her own mistakes. Yes, it must be said, like you or me or anyone — like everyone — they’ve had it hard. You can see it in the sharp wing his elbow makes, the way she shuts her eyes for miles and leans her head against the shuddering window glass. And, just to top it off, let’s say the cassette deck is broken. So for hours it’s been either silence or silence. Nebraska and silence. Yes, it’s been a hard goddamn day.

But let’s say — and it could happen, I promise you — she opens her mouth and begins to sing: Ain’t it just like the night to play tricks when you’re trying to be so quiet? Say, down the next dry hill, he can’t help but offer up: Freedom’s just another word for nothing left to lose, / And nothing ain’t worth nothing, but it’s free. Yes, let’s say that, despite it all, they begin to sing. It’s not so hard to imagine, is it? Not so hard to see them barreling down the road, the sun-washed wind in their faces, these getting-by tunes on their lips? Out with the truckers and the kickers and the cowboy angels, / And a good saloon in every single town.

Oh, I know, it most likely goes the other way. But, listen, I’m simply telling you that the ending’s not yet written. Maybe she won’t get out at that gutted Gas-N-Go in Osceola. Maybe she won’t wait until he’s gone to take a piss and then cross the street and turn the corner by the dollar store and simply walk away. Maybe two days later he won’t meet that hatchet-faced man in a roadside bar. Maybe he won’t strain bad whiskey between his teeth and clench his fist. Maybe the economies of entropy and regret won’t have their way. Not today.

I’m holding on here with foolish hope. I’m telling you they sing their way through Osceola, then turn south to miss that storm boiling up over the Sandhills. I’m telling you they stop on the grassy banks of Little Dry Creek and splash a bit of water on their necks. Telling you they make McCook by nightfall and stop at that cut-rate motel he knows and split a quart of beer while they watch moths arc and spin around streetlights like kinfolk of the stars.

I’m saying that this night they undress and pull the comforter from the bed and sweat against one another and roll away to sleep as naked and tired as stones.

I’m saying, in the frog-loud Nebraska night, in the pure dark of the Middle West of America, they dream.

And his dream is of sunburn and off-brand cigarettes and a black, watery silence she dives into and through and pulls him from, and with his tired arms he greets again the light. And her dream is of all the things she has ever forgotten lined up on a country porch, and only after she has touched and blessed each one can she race down the steps and slide into the front seat beside him for the ride to the river.

I’m telling you — just trust me for a moment, won’t you? — that she wakes and hears him already in the shower, and she rises and drapes one of his shirts over her small shoulders and begins again to sing. And I remember something you once told me / And I’ll be damned if it did not come true.

I’m telling you they sing. Listen. Hear their cracked voices whirl and ring.

I had been sad for so long that it shocked me,