Nucler Energy — I’m Against The Stuff

Pretend that this is a movie. You are seeing two men create a curl of dust as they drive in a pick-up down a dirt road. The one driving is old, his features molded like leather, worn and stretched by a hard working foot. Many miles he’s seen, of steel, concrete, glass and plastic worked and erected.

The younger one is sitting shotgun. A perennial perturbed expression denses his eyes with a slow fervid heat. His black locks of hair, his full lips, his mustache, the ruggedness of youth and the confusion of youth brings out a face with dark overtures of meaning.

The younger one says to the older one, “They still demonstrating in Raleigh over that nuclear plant?”

The old one: “They ain’t going to do a goddam bit of good! You think they going to stop all them plants over a bunch of young spurts hollering about environment? Shit! Too much money tied up, too many big shots got too much invested . . . sure, they’ll pause a little bit, but god-almighty, you stupid if you believe they’ll stop em.”

“They’re going to destroy the earth,” the young one says.

“There’s too damn many people on earth, and what the hell, kill off a few million, be a better place to live.”

“What about the earth? We won’t be able to use her for thousands of years.”

They sit quietly while writhing dust ribbons behind them. The young one gazes at the countryside. The old one continues, “Just like when they didn’t want a dam built up there, and held up the construction of the dam just because they wanted to save these little minnows . . .” and he barrells out a robust laugh, “Jesus Christ, goddamned minnows! Shit, and what did they do? They built the dam after the public got finished licking their chops over the news. The public got tired, and the newspapers went on to other business. Some of the guys collected a few of these minnows and put them in another place so they wouldn’t be killed off. They were endangered species. Still, that dam is there, ain’t it?”

They come to a stop sign. A blast of dust submerges them for a minute but from the window the young man sees the black steeple of a power plant, a coal plant.

The old man says, “We all going to die anyway. So what? Blow L.A. off the map, burn the countryside down for a million years . . . I mean, face it old boy, we need the power and the money; men ain’t going to let a bunch of squirmy screwballs take a million dollars out of their pockets. Shit, life ain’t like that . . .”

“Maybe you’re right,” the young man says. “Still, I’m against the stuff. It kills too many things.”

The movie suddenly blinks numbers on the screen signifying the end, dark slashes illuminating the screen until it dissolves to darkness. The lights go on, and we find ourselves back in reality.

Pretend I go up on the stage after the film and wish to say something to the audience. I’m nervous. The auditorium is flooded with bobbing heads; we are all floating in some offensive silence whose cruel edge chills our flesh.

An editor fidgets for his pen and notebook and scribbles something out. The confluence of social members all here to discuss the dialectics of nuclear power, that spacial troll made of clearness, a new clearness that kills clear to the bone without a sword, a gun, without emotion or hand, from out of space it has come and patrols the earth, bedazzling scientists and confounding philosophers into new states of fear and paralysis.

Pretend I say something like this: we live in an age where we value the surface of things. As in Amon Liner’s poetry, we are platform people. Slaughters are performed inside of us hourly while the supple platform of our flesh thrives with new blood; inside hangs our guilt with a black cloth drawn over its head.

So we live with double identities. Our passions have not a wit to do with what happens in laboratories. And yes, ye all purified pious angelic phantoms of history parade ’fore me with remonstrances and rebukes that here and here are the diamonded value of your efforts, unbreakable and invaluable to mankind. Haberdash! They have been my fellow cherubs poured into the coffers of cuddled opportunists and there mystified into strange alchemy that doth in bloody effect and bone dry fact turn wood and fairy meadows into money.

Such is the gnarled and haggard journey of nuclear energy. And as the old man in the movie said, so what if we kill off a few tens of millions of lovers of ease and leisure. And Historians might bemoan the adventurous Romans for crossing the English Channel and catapulting history like a rock into the fortress of fortune. And Economists might wail the wage-price system and mourn for the barter days when a cow was as good as seven hens. But the arguments must not come from what we learned in primary school and university alone: earth and people and creatures; with our very eyes we see destruction and with our very hearts we must observe that such destruction of life is hideous.

Our leisure has neutralized our minds into a hazy landscape where our energy and invention chew cuds on the sweet grass of theory. We theorize that and theorize this and believe history books about presidential integrity, whilst Nixon defrauded the American people, with his gory deeds and sham-tongued vileness, the clattering of millions of dollars flew his way into his withered hands. O Lord Nixon, theorizing this and that glory for the American people, O raise thou hands unto the high heavens and shower me with bucks! The politicians burn such sweet bushes of language before a wondrous and gullible multitude, that all kow-tow and hail in the new prince.

There has been such mad fidelity to these pompous roosters of new dawns, that since a child I have devoted myself to skipping school and addressed myself to the finer fashions of the heart: girl watching, woman-loving, traveling, bar-brawling, gambling and for countless hours sitting with friends around a pond or on a meadow or around a kitchen table conversing on poetry, world affairs and good quality pot. While the destination of the nation like a heroin addict’s mistress sucks up more and more money only to throw it away into useless habits of luxury.

I can sense I repell you as an eloquent hodgepodge of Byronic and Lorcanic idealism and repugnance. To entertain you with pentameter and trimeter and the truant verses of a social villain is not my trip; nor am I here as a moral and romantic constable. Nor am I in the visage of one of those venerable and beautiful souls who with delicate truth shatter the sinister lie.

I suppose I am no one at all, an invisible presence uttering nonsensical pleasantries. But I do not butcher life, I do not plan the genocide of generations, I do not paint over truth with respectable inscriptions of authority that collar our frowning and clownish politicians. And if we are apt to enjoy ourselves, then why don’t we continue the fine custom of hurling debris at the terrible role-playing our distinguished politicos flounder in? Tell them to get the hell off the stage! We pay good money for performance, and if it’s gibberish, why should we pay someone else when we ourselves do so much of it? We pay them, remember, they don’t pay us.

I say this: if you wish to destroy the earth and its magic carpets of foliage and the air and waters, all of you destroyers go jump in the sea. The fish will fatten and fishermen like myself will be all the happier. I mean, if you wish to die, then do so, by all means. I will accompany you, brave and valiant ones, with virtuous melodies; I will sing sonnets to your wigs, elegies to your mistresses, beautiful lyrics to your Cadillacs, compose such unforgettable couplets to your mansions and fingernails, encase your underwear in glass display in the best cathedrals, ferment the best wine in your entrails, hollow out your bones to the finest flutes for the genius of musicians that they may fill the marrow with Spring’s fertility. But enough of your nincompoop stumblings and cigarstubs and flamboyant gestures! Take it to the shit house, as the old man in the movie would say!

So no, I have not the vernacular of a steady discipline to convince my fellow enjoyers of life’s little things, against Nuclear power. I simply enjoy life as it is shown us in the seasons, I enjoy the explosions of blood and flesh when they ignite in love and battle, I enjoy the fruits, Sun, Moon, tears, laughter, sitting in a swinging chair, reading, the ground, waters, fishing, writing, O and loving women! and finding good comrades, and loyalty, and walking, running and eating. Thus you see, by my wayward argument, all the things I enjoy, haven’t a rat’s hair to do with needing nuclear energy. So I must agree with the young fellow in the film, and say, “I’m against the stuff.” 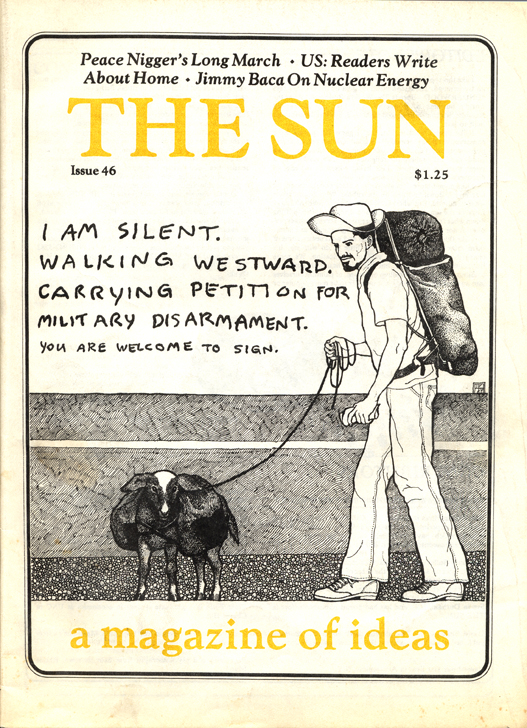