With touching concern, several subscribers have e-mailed recently to ask if I’m still upright and breathing and, if so, why Sy Safransky’s Notebook hasn’t appeared in The Sun since last February. Have I given up writing? Am I seriously ill? Has the staff been waiting for just the right moment — after the Super Bowl, before the start of Daylight Saving Time — to announce my demise?

Those readers can stop worrying. I’m still writing, I’m healthier than I have any right to be, and Sy Safransky’s Notebook will return next month — because the book I’ve been working on since the dawn of time is finally finished. It’s called Many Alarm Clocks, and it’s a collection of my Notebook entries. If you’re wondering why it took so long to put together a volume comprised of previously published work, your guess is as good as mine.

What follows is an edited version of the preface to the book. Many Alarm Clocks won’t be easy to find in most bookstores, nor will it be available from Amazon, because we all have to draw the line somewhere. To order a copy, visit our website: thesunmagazine.org/books.

I write in my notebook early in the morning, almost always before the sun comes up. (To the sun it doesn’t matter, but it matters to me.) Some of the entries are long and carefully considered; some are just two or three run-on sentences: fragments of essays I’ll never write, snatches of conversation, postcards from the dream realm.

Usually I write for at least an hour; on some mornings maybe a half-hour. Writing something every day is important to me — no matter how little sleep I’ve gotten or what mood I’m in. When I’m faithful to this practice, my skin has a rosy glow, the car starts in the morning, my cats come when I call. But I’m not always faithful. Sometimes I oversleep, or I wake up worried about an impending deadline and head straight to the office. Even then, I try to remember what the physician-poet William Carlos Williams said. He was also a busy man, known to compose poems between seeing patients. He insisted that “five minutes, ten minutes, can always be found.”

I use a rollerball pen. I write on narrow-ruled paper. The paper is supposed to discourage big, loopy handwriting and keep my ego in check — a failed experiment, though I persevere.

For more than half my life I’ve lived in Chapel Hill, North Carolina. So, weather permitting and clichés about the South notwithstanding, my favorite place to write is in a wicker chair on the porch. Does it matter that I grew up in a kosher household in Brooklyn, New York — one set of dishes for meat and one for dairy; nonstop complaining in both English and Yiddish — and will never be mistaken for a Southerner, let alone a Southern writer? What matters is showing up in the morning. The Muse couldn’t care less where I’m from.

Nonetheless, it’s here in this Southern college town that I borrowed fifty dollars and started a magazine more than forty years ago. And it’s here that The Sun continues to be published every month: an ad-free, independent journal to which I still devote most of my waking hours.

I used to write essays every month for The Sun. After all, one advantage of starting your own magazine is that, for better or worse, it gives you a place to publish your own writing. But here’s the catch: if your magazine grows beyond your wildest dreams, you’re likely to become a hardworking editor and publisher who can barely find time to write. (It doesn’t help that I’m the slowest writer in the world; others may make this claim, but, trust me, I’m slower.) These days, instead of essays, I publish pages from my notebook.

Nine-tenths of what I write in the morning never gets into print because there’s a thin line between being self-revealing and self-indulgent and, at least in broad daylight, I try not to cross it. But every month or so I type up the sentences that seem to have some merit. I edit. I edit some more. The words left standing are marched single file into a section of the magazine called Sy Safransky’s Notebook. That’s where all the journal entries in Many Alarm Clocks originally appeared.

Many Alarm Clocks isn’t a book in which you’ll find any practical advice about how to start a magazine or how to run a magazine or how to circle the wagons in defense of the serial comma. Nor is this book likely to help writers who regularly submit work to The Sun and are understandably dejected over how many times they’ve been rejected, and who would like to understand why I’m so hard to please. My heart goes out to them, but I don’t understand it either.

There’s a lot I don’t understand, as the book should make abundantly clear. In it I criticize my own writing and ruminate about love and loss, and faith and doubt, and hypocritical Republicans and feckless Democrats, and the wayward republic to which, hand over heart, I pledged allegiance as a schoolboy. I write about being a Jew who keeps a picture of a Hindu guru on his wall and sometimes prays to Jesus; and about being a husband and a father and, most recently, a grandfather; and about eating too much and about not meditating enough and about getting older every day no matter how many vitamins I take. Sometimes I talk to the dead. Sometimes I argue with God.

Though drawn from the magazine, Many Alarm Clocks isn’t a random collection of Notebook pages. From more than two thousand published entries I selected those that best fit a handful of recurring themes, trying to avoid the temptation to make myself look wiser than I am, less afraid of dying, less afraid of living. Then I braided them together along a more-or-less chronological arc that begins in 2000 and spans nearly fifteen years. This last part turned out to be more challenging than I’d anticipated. If only I’d paid more attention when my grandmother, seemingly effortlessly, braided together several strands of dough into one magnificent loaf of challah. What would she have thought, I wonder, of that confused-looking man in rumpled clothes, his hair disheveled, pacing back and forth week after week in front of a wall covered with bulletin boards, compulsively arranging and rearranging more than six hundred three-by-five index cards, each with an individual journal entry on it?

Since the themes in Many Alarm Clocks repeat themselves, I sometimes repeat myself. For example, I often write about my wife, Norma, because, after having been married to her for more than thirty years, I’m still in love, and still regularly reminded how difficult it is to love another person the way she deserves to be loved. So there’s probably too much arguing with Norma, and too much lovemaking with Norma, and too many references to the moonlight on Norma’s long, dark hair. (As the poet Jack Gilbert wrote, “People complain about too many moons in my poetry. / Even my friends ask why I keep putting in the moon. / And I wish I had an answer.”)

One of The Sun’s editors suggested that there’s “too much about loneliness.” I agree. What business do I have being so lonely? I’m a happily married man. I’d like an answer!

I also use the word God too much. (One hundred sixty-one times, God forgive me.) “There’s a lot of coffee in this manuscript,” another staff member said. “You could open up an espresso stand.” There are two references to how many words the Inuit have for snow, two quotes by Eckhart Tolle, two quotes by Woody Allen, singing birds on page 62 and page 64, and three references to making love not war.

Though I tried to keep topical entries to a minimum, more than a few chapters are devoted to the terrorist attacks of September 11, 2001, and the misguided and shameful “war on terror” that followed. Because some Sun readers deplore my politics, and others wish I’d stick with the politics and stop obsessing about my so-called self, it’s possible that some of you who plunk down good money for the book are going to be displeased. That’s why every sentence comes with a money-back guarantee.

A note about how to read the book: any way you want, of course. This is still mostly a free country, unless the government has decided you’re an enemy of freedom. You have the right to read back to front. You have the right to jump around, if you like jumping. But to avoid confusion I suggest you start at the beginning. Some of the entries were written by a middle-aged man who’d just gained a few pounds; some by a man in his sixties who’d just lost a few pounds. His president was George Walker Bush; his president was Barack Hussein Obama. His country was fighting one war; no, two wars; no, a never-ending war.

The title Many Alarm Clocks is purloined from the enigmatic spiritual teacher G.I. Gurdjieff, who maintained that most of us live in a trance state, a kind of waking sleep, but that it’s possible, through a rigorous process of self-transformation, to wake up and discover our true nature. I don’t presume to grasp the breadth and depth of Gurdjieff’s teaching, and the jury still seems to be out on whether he was a great mystic or a great trickster, or both. But habitual early risers like me are sometimes tempted to claim the moral high ground and forget that getting out of bed is the easy part. So I value his reminder that “a man may be awakened by an alarm clock. But the trouble is that a man gets accustomed to the alarm clock far too quickly and ceases to hear it. Many alarm clocks are necessary and always new ones.”

Just to be clear: I’m not a follower of Gurdjieff. Many Alarm Clocks isn’t a guidebook to spiritual awakening. And though I read books by spiritual teachers, and sometimes interview spiritual teachers, and often describe my work with The Sun as “my spiritual path disguised as a desk job,” I’m asleep much of the time, too. Every day I’m humbled by how challenging it is, during our brief stay on this mysterious planet, to wake up and stay awake.

The book mentioned above is out of print. 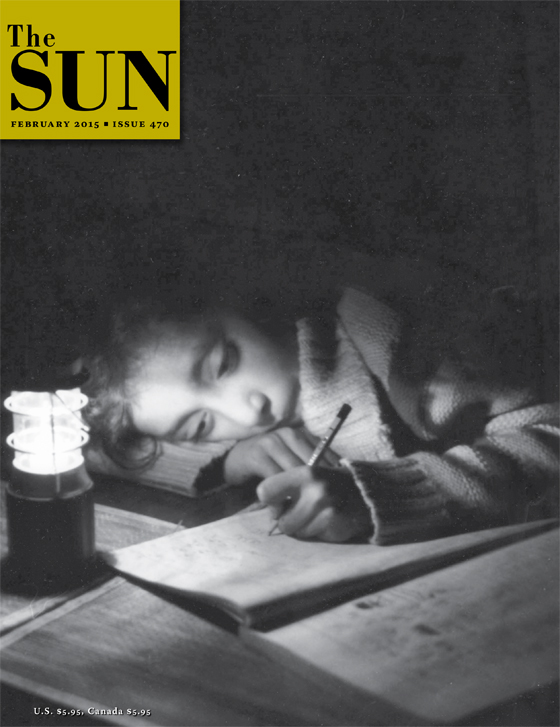 By SeSe Geddes
The Sun Interview