Since my grandfather had begun feeling poorly, he’d become ever more insistent on dining at precisely 5 PM. At 5:30, I found him already eating some glutinous leftovers from lunch. Still, I made a salad with some ricotta sprinkled on top, and beets, and corn on the cob. The food seemed to go into him like water into the leaves of a drooping plant, perking him up.

“I’m sorry I haven’t been around to cook something once in a while,” I said, feeling now the unimportance of the obligations that had occupied my time while my grandfather had gone into decline.

“Oh, no, my dear,” he said. “When opportunity knocks, you have to take it. That’s the way it goes. One leads to another. You have opportunities, you take them.”

Before I left, I made soup. I removed most of the skin from the chicken and baked it first so the broth wouldn’t be oily, as my grandmother had taught me, and I set the garlic, onions, celery, and carrots simmering. Then I added the cooked chicken and the spinach, and boiled the soup. The broth turned a rich auburn-olive color; it smelled delicious.

Whenever we hear of a friend concerned with family illness or need, we Americans have learned to say, “Don’t forget to take care of yourself; make sure you take care of yourself” — but it rings to me a little unconvincing, a little hollow. . . . The American self is the doing, achieving, self-realizing, independent self. A self rattling freely in the large jar of the world. . . . Yet the world is continually telling us its truth of universal need, of mutual dependency.

A friend of mine has pointed out that we’re one of the very few countries whose citizens eat old food from far away. You see the difference in the color of the food. When I raise vegetables in my garden, the colors sing. When I look at produce in the grocery store, imported from Mexico and Chile and Australia, I don’t see the same color. . . .

We are creatures of local ecosystems, adapted to the microflora — as well as the macroflora and fauna — of a specific region. The fungi on my apple, the microorganisms you can’t even see: that’s what I’m adapted to. The minerals in that soil: that’s what I know. That’s what my body knows.

“Before We Leap,” Carolyn Raffensperger, interviewed by Derrick Jensen, November 2002

To approach agriculture without a sense of mystery is to reduce it to an industrial, mechanical process. To farm well, you have to merge with the biological world, which has inherent spiritual value. I’m not at all a religious person, but I would say that my spirituality is most prevalent when I’m in touch with the land. I see the same thing happen in the people we feed. They recognize the spiritual component and respond to it.

People will tell you that the organic-farming revolution that’s taking place is about food safety or ecological concerns, but I think that if you dig down deep, you’ll find that the revolution is really about what people are missing in their lives: good food and a connection to the land, both of which put us in touch with basic spiritual values.

Most of us no longer know what it’s like to pull a carrot from the ground or to munch on beans so fresh they explode in your mouth. But there’s another kind of nourishment, less tangible than the carrots or the beans, that being connected with the land provides. This deeper, soulful nourishment is what our society is desperately longing for.

It’s potentially a wonderful thing to belong to a piece of ground. Indigenous cultures understand that connection. And as an agrarian society, we once understood it. But within the last few generations, we’ve lost that connection. I’m forty-one. I didn’t grow up on a farm, but my grandparents did. And my uncle had a ranch, where I went as a child. Even though I didn’t see my time there as important, it did help me establish the connection: I knew where pigs came from, and milk and potatoes. Future generations won’t have anywhere like that to visit. They’ll be totally disconnected from the land. I once talked to a woman about the farm crisis, and she actually said to me, “I really would like to be concerned, but I don’t get my food from the farmer anyway. I get it at the store.”

One hot summer day, Papa took my cousins, my brother, and me with him to run errands. As we were headed back to the farm, we drove past some people working in a cotton field. . . . One of my cousins started making fun of them, and we all chimed in. I don’t remember exactly what we were mocking. It may have been their dirty clothes, or their skin color, or the work they were doing. I do remember that a shadow fell over Papa’s face. I had never seen him look so serious. He pulled over and told us to wait for him in the truck.

When Papa came back, he told us that we were going to pick cotton. He gave each of us an enormous sack. We were not to return to the truck until we had filled our bags.

I was excited at first. It was fun to see the white puffs we kept in a glass box in the bathroom growing from a plant. I figured it would be easy to fill a sack. As I started down my first row, sweat began to drip off my bangs into my eyes. The sandy clay soil stuck to my legs. The tough points of the dry outer pods scraped my hands. I was dismayed by how little of the bag my handfuls of cotton fiber filled.

A woman with a scarf on her head stopped picking to look at me. There was neither animosity nor friendliness in her expression. I was used to adults addressing me in a cooing, comforting way. I thought perhaps this woman would put down her bag and help me fill mine. I was just a little girl from the city. Surely she would want to help me. But she returned to her own work. . . .

There were other children . . . in the field. They didn’t have their own bags, but were picking cotton and putting it into the bags of the grown-ups. Those kids worked a lot faster than I did. Didn’t the sun bother them?

I started picking again, slower than before, careful to avoid the hard stems and pods. The sun dropped only slightly in the sky. When I saw Papa coming toward me, I felt sure he had relented. Instead, he took my bag and emptied it into my cousin’s. He told us that we could both fill the one bag. . . .

Finally, when we had picked just enough for the cotton to reach the mouth of the bag, Papa emptied our pickings into a field worker’s sack. That man turned and began to pick the rest of our row.

We followed Papa up to the pickup and crawled into the cab. I was too worn out to feel relief. As we drove away, I looked back at the field. No trees, no shade, just the red waves of silt and cotton plants. Papa didn’t say a word: no praise, no criticism. I’ve never forgotten that lesson.

I invite people to take a look at the world around them, then at the world of North America four hundred years ago. At that time we didn’t have any big institutions to take care of us, such as big governments, big corporations, welfare states. We didn’t have food stamps, jails, prisons, old-age homes, police, lawyers. We lived by a natural law, and we understood what natural law was. You see, people really know how to live until society starts to make them stupid. The civilization we’ve grown up in hasn’t taught us the things that we really need to know. It doesn’t teach us how to live on the earth, or how to love one another! It doesn’t teach us how to take care of our children and our old people and all of their problems. It shunts the problems off to professionals. So we end up powerless, being governed by experts.

Carl Anthony: I think of my next-door neighbor, a woman seventy years old, whose parents were sharecroppers driven off the soil in the South by mechanization and the boll weevil, and also by the Ku Klux Klan and the inability to go to the polls to vote. If you search the pages of ecological literature, you don’t find anything about her kind of experience. . . .

The Sun: There’s a strange irony surrounding the role of blacks in America, isn’t there? Here are a people who were forcibly brought to this continent primarily to work on the land; they were bonded to the soil by violence as the society’s lowest-level farming population. But now, in the late twentieth century, we think of blacks almost exclusively as people of the inner city. Our cities are becoming more and more a black community as whites flee into suburban areas.

Anthony: It’s incredibly ironic. And it’s never talked about in the environmental literature. But I see it as central to the ecological issue that humans’ domination and exploitation of nature began at exactly the same time as when blacks were forced to work the land.

“Environmentalism and the Mystique of Whiteness,” Carl Anthony, interviewed by Theodore Roszak, August 1995

The Sun: How can people get back to their roots?

Malidoma Somé: It will have to start with the rediscovery of the rituals that were once the connecting rods between the living and the dead, between humans and the earth. It will require fine-tuning the ear to hear the subtle vibrations once more, enabling us to recognize when the sacred is around in order to show it greater respect. It will require a remembering of the practices that once kept the village and the tribe together. The only hope is that there are a few people who have held on to the traditions. It is these few — who have been pushed aside as having nothing to contribute — who might become teachers to those who are willing to journey back into the past in the interest of healing the future. 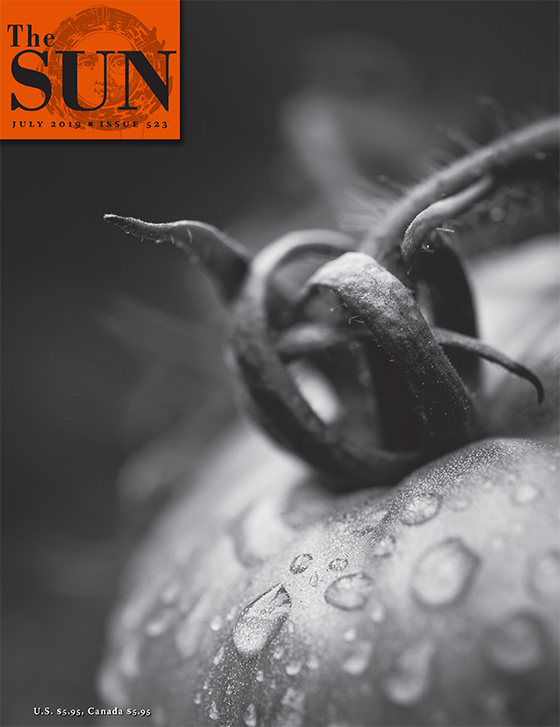