There have been years of make-believe Hollywood and western pulp novel Indians while the real Indian was starving in too many cases, and certainly getting nothing positive, either material or spiritual, from the fake Indians. Then at least since the sixties there have been swarms of another kind of fake Indians ranging from hippie kids with Hong Kong beads to rather shallow and exploitative pseudo-religious and cultural groups — the so-called white shamans and their sometimes-native gurus. . . .

We live in perilous times. All human beings have always lived in perilous times, but the perils of our times are our own and we know them well. For several years now, a sizable group of Americans have seen Indians — or the Indian way — as an approach to the diffusion of some peril. . . . There is temptation to idolize Indians as role models. Besides the aforementioned exploitative nature of such an attitude, most Indians just aren’t very comfortable in such a position.

The twenty-dollar bill has Andrew Jackson’s face on it. Jackson ordered the forced migration of indigenous people. . . . Having Jackson on the money is to a Native American what having Hitler on the money would be to a Jew. People will criticize me for that analogy, but they are able to do so only because the perspective of whiteness says that Jackson was “a product of his time.” He scalped indigenous people and kept their skins as trophies. How is that not seen as barbarism?

“By the Color of Their Skin,” Tim Wise, interviewed by David Cook, July 2009

So it began: we enslaved the horse; we created the mule; we made slaves of dogs. Soon afterward we learned to enslave human beings. Now, today, our social machine is trying to enslave the whole of nature — put everything to work for the sake of human greed and human power. That, I think, is the great evil, the ultimate evil, of the modern age. By “modern” I mean, of course, the last five thousand years, when the nightmare of history began. . . .

I think the best thing we could do for the traditional people is to let them bloody well alone — keep our greedy hands off their land and off their lives. If only that were possible. But most of them now are shut up in little enclaves within industrial society, and most of them have become dependent upon it. . . .

Ideally, I would say we should declare the Papago Reservation and the Navajo Reservation, for example, fully independent nations and simply let them alone. But it’s too late for that. It couldn’t possibly work. The world has become too interdependent now. Somehow the Papagos and the Navajos and the other tribes are going to have to work out a decent life for themselves within American society. The majority of them are facing the same difficulties that . . . the white Americans are facing, and the blacks and the Hispanics: how to survive in a crackpot economy, a crazy industrial empire that the managers cannot manage and the economists cannot comprehend.

I don’t think those in power want it known that there are other ways of living, because for the industrial state to succeed, all the citizens have to be part of the economic machine. If you have people living out in a rural area pretty much self-sufficiently who spend their time singing and writing poetry, it tempts those who are still part of the machine to try to seek better lives themselves. If you saw the lack of stress in indigenous people, and then looked at the stress created by the industrial machine, you’d realize that the whole system has gone crazy. We don’t control machines; they control us. So the system has got to crush any alternatives.

This is the legacy of Christianity. The stated Christian ethic is to “love thy neighbor,” but, historically, Christians have been afraid and suspicious of any neighbor unlike themselves. And if those neighbors won’t change, they’ve simply killed them. Certainly, millions of Indians were given the choice of Christianity — and enslavement — or death. The same thing happens today, but it’s generally couched in economic terms, rather than religious ones.

I don’t know what I’ll do if one more person comes to me and says, “I’m sure I was an Indian in my past life.” There weren’t that many Indians! It’s a bizarre notion anyway, a Hindu philosophy glommed onto a new-age guided-imagery technique, all for the sake of reassuring you that you’re connected with the ancestors of this land, which in fact you are not. It’s a kind of placebo, I guess — it makes people feel temporarily connected. But why not feel connected to your real ancestors, who deserve your respect, and who had as much shamanic power as any Native American shaman?

There seems to be a desperate need for many Anglos now to have some connection with Indians or the indigenous people of wherever they are. And it’s not very mysterious why. There’s a strong feeling of rootlessness. So you took over the whole country, you got all the land and everything, but guess what: you, your children, and your children’s children have a feeling of absolute rootlessness and alienation. There’s a desperate spiritual struggle to feel connected as the land is being destroyed, the animals are being destroyed, and we’re on the point of the possible annihilation of the human race. People are looking around and saying, “How did this happen?” They’re grabbing for anything they can hold on to.

“Before the white man came,” Ben explained, “rape was almost unheard of. When a Cree woman was molested once, the whole nation went to war over it.”

“It’s the white man’s alcohol,” said another voice down the table, “that turns our young men into cowards and madmen.”

“Is it all the white man’s fault then?” I heard myself asking, my voice cracking dangerously under the weight of the question. . . .

“You know nothing about our history,” he said. “Nothing! What there was before your people came and ruined it . . .” There was a general noise of agreement up and down the table.

“But it wasn’t my people,” I protested. “My great-grandfather didn’t come over until this century. He was a tailor in New York City and he was very poor and died there. He never even heard of Indians, probably; he was just escaping a war in Europe—”

“And why did he come here?” asked the blue-eyed Indian.

“To escape persecution,” I said. I had been told this so many times that repeating the familiar words was almost like religious ritual. . . .

“We’re Jews,” I finally managed to say. “We have another history.”

“Jews are just another kind of white to me,” someone said.

“We had no land either,” I explained.

“No reason to come here and live on ours,” someone said.

Before we drive off the reservation, we stop for coffee at a trading post that sells everything from canned beans to expensive Navajo rugs. (The rugs cost thousands of dollars, though the women who weave them usually make less than minimum wage.)

I lean against a counter, listening to the music coming over the sound system. Though I can’t understand the words — the woman is singing in Navajo — I’m transfixed. The singer’s voice is strong and passionate, her melodies haunting.

I end up buying the tape with a translation of the lyrics. I listen as we drive. When Sharon Burch sings of her happiness for the things that sustain her life, for the rain, for the white corn; when she sings that the earth’s arms are her arms, the earth’s strength her strength, I ache as if she were singing a love song.

The singer credits her inspiration to the prayers and chants she learned as a child. She grew up on an impoverished reservation, yet despite hardships she learned to love the living earth. I, a privileged white man who grew up in the city, love nature the way you love a distant relative. I pave over my day with busyness. I make my desk the world, call a stack of papers a mountain.

There are some of our native people . . . trying to follow the traditional way on one level, and yet they are very political still, and they have a lot of the violence they have carried over from the political movements. But you can’t carry the tomahawk and the pipe at the same time. And if you really believe in your medicine and in the power of the medicine pipe then you don’t need the tomahawk. I’ve watched political things come and go, and I’ve seen the aftermath of it. If you don’t have a spiritual center it’s not a lasting thing.

“The Pipe or the Tomahawk,” Sun Bear, interviewed by Howard Jay Rubin, April 1983

The Sun has been a magnificent teaching tool. I used the short passages from the August 2019 “One Nation, Indivisible” to fill out my students’ understanding of Native American issues. I have also used Readers Write to teach them about topics like race, gender, and prejudice. The texts are accessible and insightful, offering an alternative to the mass media my students consume. 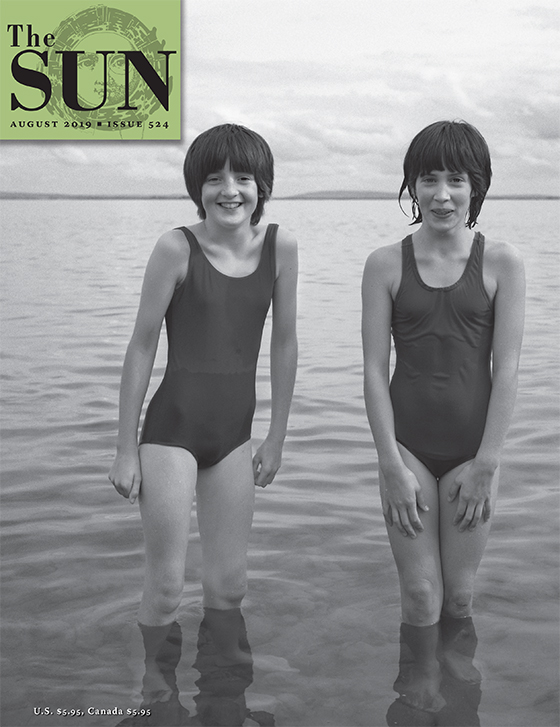