“Do not make yourself vulnerable,” the martial-arts instructor began. “Scan your environment for threats. Find your exits.” His teenage students at the gym hung on his words. Each one looked vulnerable in that awkward, adolescent way — including my son, Khalil. When fights break out at his high school, students crowd around and record videos to circulate on social media. After seeing a grainy clip of a vicious hallway brawl, I’d signed him up for this class. The instructor had assured me that learning martial arts helps calm anxiety and deter aggression. The most dangerous men he knows, he said, are also the most peaceful. I was intrigued. But now, as I watched Khalil practice throwing punches to the face, I doubted whether I’d made the right decision.

I mentioned my misgivings to Sy, The Sun’s editor, and he shared with me a true story by Terry Dobson that appeared in the magazine more than thirty years ago: Dobson, an American aikido student, was riding the subway in Japan when a drunk and belligerent laborer boarded the train and began harassing passengers. Dobson was about to put the angry fellow in his place when an old man, sitting nearby, asked the laborer what he’d been drinking. Sake, the laborer replied, cursing him. The old man calmly spoke of the pleasure of drinking sake with his wife in their garden every evening. The drunk man said he had no wife and no home. The old man said, “That is a very difficult predicament, indeed. Why don’t you sit down here and tell me about it?” Within minutes the laborer was lying on the seat, his head in the old man’s lap. Dobson realized that he had just seen the true essence of aikido in action.

We’ve chosen a different path: to publish the most humane magazine we can and to trust our readers to help us keep it going.

Opening our hearts to someone else’s suffering is a powerful way to defuse conflict. Fear tells us to defend ourselves, but love challenges us to do otherwise. That’s one reason why The Sun matters right now. In this magazine writers share uncommon vulnerability. Our photos are black-and-white, but the picture our writers paint of the world isn’t. Reality is complex. Loveliness and ugliness are tangled up together.

Some media outlets stoke conflict with scandalous details and easy targets for our outrage. Blaming others is so much easier than facing ourselves. Instead we fill each issue with truthful, reflective voices — and keep The Sun free of advertising. It’s not that we’re opposed to advertising in general. It’s simply that we believe great writing can awaken minds and connect hearts, and we value that sort of writing too much to make it compete with a clever marketing pitch for your attention. We can’t promise that The Sun will always make you feel better, but we can guarantee no hype and no hidden agendas.

The decision to decline advertising puts The Sun in an unusual position. Subscription revenue alone does not cover the magazine’s expenses. Other publications rely on ad revenue or a major funder, or both, to make ends meet. We’ve chosen a different path: to publish the most humane magazine we can and to trust our readers to help us keep it going. If this seems idealistic, that’s because it is. And sometimes following our ideals leads to extraordinary outcomes. For forty-five years now, readers like you have kept this magazine in circulation. Your donations have sustained us when we lost thousands of subscribers during a recession; enabled us to withstand the bankruptcy of a major distributor who owed us thousands of dollars; helped us recover from a lightning strike that knocked out our computers; and allowed us to absorb regular printing and postage hikes. We can’t explain how we’ve outlasted magazines with bigger subscriber lists and more-robust business plans, but this we know for certain: our relationship with you is our greatest asset.

If you want this magazine to endure, then please consider becoming a Friend of The Sun. With your tax-deductible donation, you’ll take a stand for independent publishing and the power of the written word. Your support will enable us to meet unexpected challenges. We’ll keep paying our contributors fairly. We’ll continue to give free subscriptions to prisoners who ask for the magazine and to writing groups for immigrants, veterans, low-income students, and others with important stories to tell. And, above all, we will do our best to publish work that challenges you, comforts you, and makes you feel more connected and alive.

The other day, driving Khalil to martial-arts class, I was silent, my teary eyes hidden behind sunglasses. Usually I consider car rides an opportunity to draw my captive teenager into a conversation, but that day my mind was racing with everything I wished I had and hadn’t said during a painful argument with someone. My son stared out the window, a bored expression on his face. He didn’t say a word until I parked outside the gym. Then he turned toward me, put his hand on my shoulder, and asked how I was doing. It eased my mind to see him let down his guard and extend compassion — to show a different kind of strength.

P.S. You can also donate online at thesunmagazine.org/donatenow. Your gift is tax deductible, and we’ll send a receipt for your records.

I appreciate your decision not to sell advertising, but your request for support in the December 2019 issue [“Become a Friend of The Sun”] was so discreetly embedded in Krista Bremer’s beautiful prologue that it didn’t move me to do anything at first. Then I thought, Oh, this is a call to action. Of course I’ll give something extra.

Discreet is good, but how well is that working for you? Maybe if you turned up the heat just a fraction, it would improve response rates.

Joseph Gilday Takoma Park, Maryland
More Letters
What Do You Think? We love getting letters to the editor for our Correspondence section.
Has something we published moved you? Fired you up? Did we miss the mark?
Send A Letter 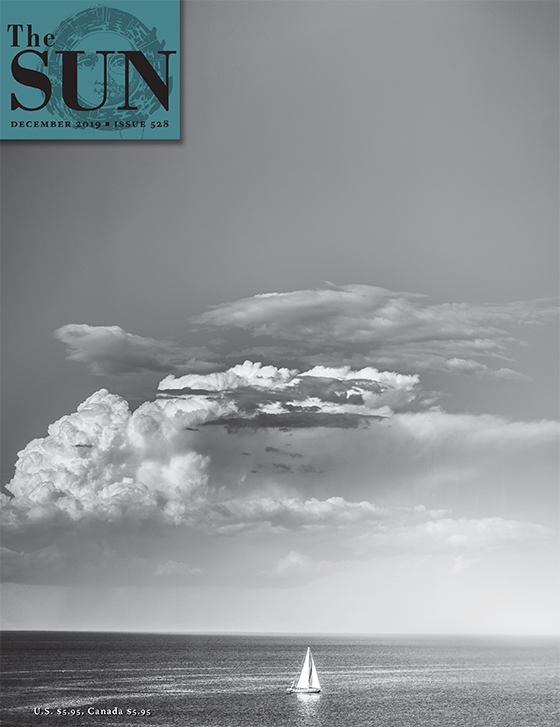 Pistol In A Drawer

By Owen McLeod
The Sun Interview

The World We Still Have

Barry Lopez On Restoring Our Lost Intimacy With Nature