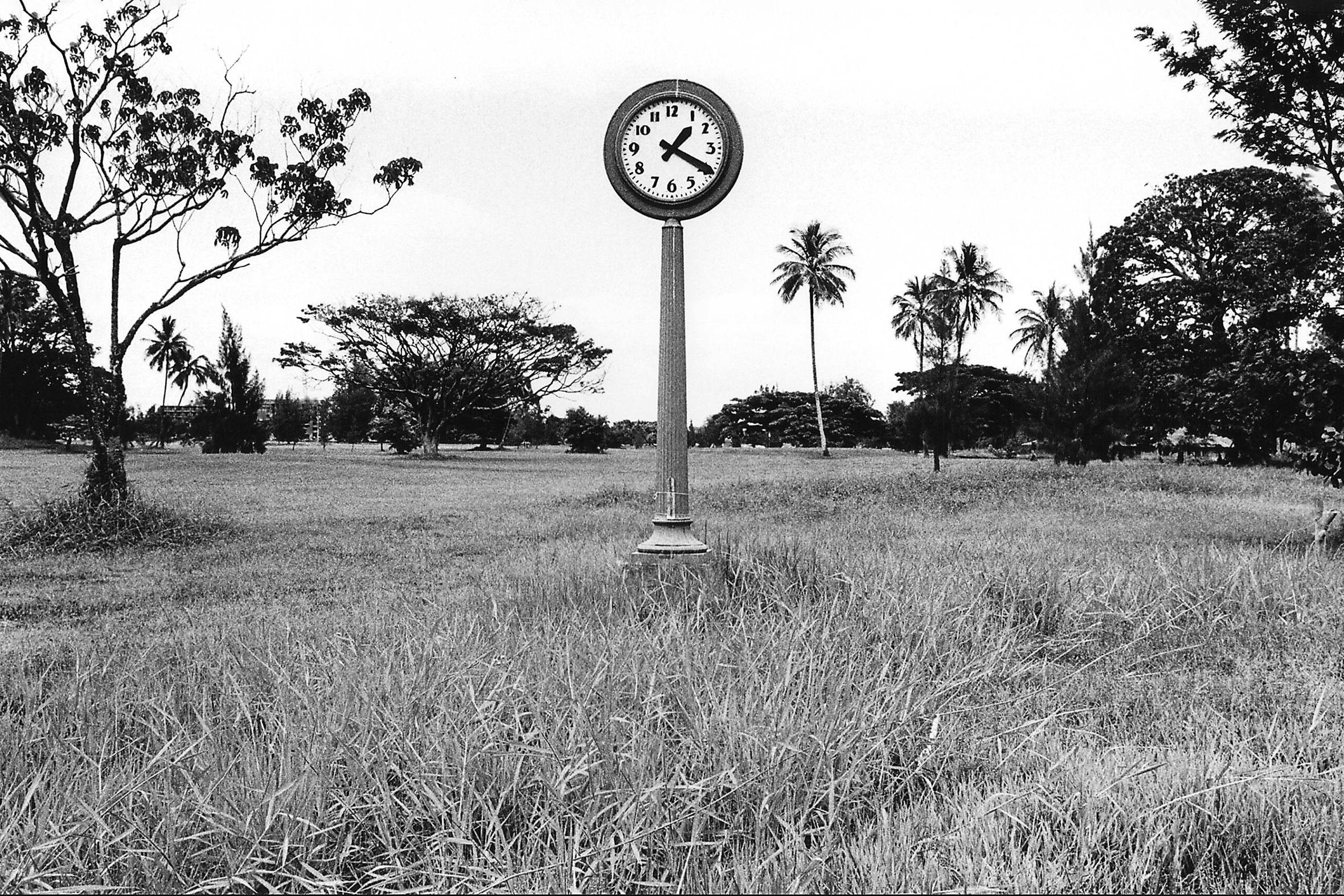 In the 1980s the Casa Cloister hostel in Guanajuato, Mexico, was a haven for aging gringos escaping their American pasts, or trying to. The word out on George was that he’d been an important man north of the border, a famous architect or something like that. Now almost broke and half blind from macular degeneration, he was navigating the terrain of old age as best he could.

The Casa was perfectly located for George: catty-corner to the city’s main square, called the Jardin, and in the other direction but a short walk to Truco 7, where the food was both good and inexpensive. I ate there, too, more than at any other place.

George was a talker, and he would sometimes hold court at the Truco too long, then have trouble finding his way home in the dark, especially if it was raining. Once, I happened upon him totally turned around. His face lit up at the sound of a familiar voice.

“Old age,” he lamented as we walked back to the Casa, huddled together under my umbrella. “Nothing prepares you for it.”

Normally a one-tequila drinker, I’d had three or four that night and was leaning on him as much as he was on me. This will be a moment I’ll remember, I thought, though I didn’t care much for the old-age talk.

“You look in the mirror one day and ask, ‘Who’s that old man?’ ” George went on. “What an irony, Jim. You finally see how beautiful life is as it’s coming to an end. It makes me want to scream.”

How beautiful life is? Did I really hear George say that? That summer his room at the Casa was next door to mine, with only a thin wall between us. I’d often hear him pacing at night and talking to himself; suffering his infirmities, his ironies, his dark angels; sometimes shouting in his sleep. Once, he genuinely screamed as if someone were being murdered. Woke the whole Casa up. George was a wonderful guy, but he had a dark side, to be sure.

For me, in my early forties, these were exuberant times, especially the few months I spent every summer in Guanajuato, writing, walking, dancing, and meeting other writers and artists. There was music everywhere: the Jardin mariachis serenading couples at the patio restaurants; the brass band playing in the gazebo; the Cervantino Singers; the symphony every Wednesday in the Teatro Juárez. Step outside the Casa’s front entrance, and there it all was, most of it free. You could live well in Guanajuato on a fifth of what it cost to get by in the States. George told me once that if he had his druthers, he’d never return to the U.S.: “Greed is God over the border. Money and youth. That’s no country for old men. If you live to be an old man, Jim, get down here as soon as you can.”

The remark caught me off guard. Unbeknownst to George, I’d been polishing up an essay on Yeats’s “Sailing to Byzantium,” source of the “no country for old men” quote. But what really rattled me was how he had spoken of wealth idolatry and youth idolatry in the same breath, as if they were on the same plane. Wealth idolatry had long been easy for me to see through. I was in full agreement with philosopher Eric Hoffer’s observation that you can never get enough of what you don’t really want. Greed made people cruel. Wealth made them dull.

But the desire to hang on to youth for as long as one could — to see that as greed was new to me, and the idea had deep implications for how I saw myself. Something I’d always thought of as simple had become suddenly complex. My generation had coined the expression “Forty is the new thirty.” Had I been suckered in? Could I no longer assume that to snatch an extra decade of youth from Father Time was a healthy desire?

Who wouldn’t agree that watching what you put into your body was important? You know: eat more greens, drink lots of water, cut back on sugar, salt, fat, caffeine, alcohol. It wasn’t all that hard to do. Fast every now and then to rest your digestive system. Don’t smoke, no matter how sexy it might look in old Bogie-and-Bacall movies. Just going over the list in my head slowly reinvigorated me. If you could buy ten more years of youth, or even just the appearance of it, surely that was worth doing.

I didn’t say this out loud to George, of course, so as not to offend him, but I saw no upside to getting old. Zero. And looking old? It was far too close to looking dead.

Still, with this offhand remark, George had pricked a hole in my confidence.

That hole is still there, more than thirty years later, grown much larger now, even though I got those extra years of precious youth and have already lived a couple of years past the life expectancy of the average American male, with likely several more still to come. I’m twelve years older than my Grandfather Cairl and three years older than my Grandfather Ralston when they each died, and I am fast approaching my father’s age when he passed away.

Passed away. I smile at that euphemism. Dad himself referred to dying as “taking the big wink.” Like his father, he didn’t put up a lot of resistance to life’s natural flow. He lost a wife and a daughter, grieved them both deeply, then recovered in a timely manner, remarried, and grew old cheerfully. And when it was his turn to die, he did so without complaint. Aging and dying were in the nature of life — he’d often say as much. None of that Dylan Thomas “Do not go gentle into that good night” for him. He happily ate white bread and preferred the fat on a pork chop to the lean meat. He liked hearing about my four-day watermelon fasts because they were good fodder for jokes.

It troubled him deeply, though, that I called myself an agnostic, which to him was the same as an atheist. “A little bit of learning is a dangerous thing” was his frequent comeback to something I’d said that I’d thought was wise. There was one family in our hometown that had produced a long run of valedictorians and salutatorians, two or three of whom suffered from migraines and depression. Dad would point to them as examples of what happens when you overthink everything. “A person can think too much,” he was wont to say.

How does that song lyric go? “You don’t know what you’ve got till it’s gone.” I miss those conversations. I miss my father. My grandfathers, too. I miss the way they aged, which is another way of saying I am beginning to realize I am meant to age the same way but haven’t, being determined to stay young. Nowadays I’m less sure than ever of the value of my fight against time.

When I see pictures of my dad and my grandfathers at or near my current age, they look like the genuinely old men they were. And they didn’t dwell on it. By my forties I was already harboring a secret pride that I could pass for younger, even as I was becoming an avid reader — almost a disciple — of Carl Jung, who shouts strong warnings against striving to be younger than we are. In “The Stages of Life,” Jung says the challenges of old age are just as important as those of our youth (“soul important,” George would have said), and they need to be lived abundantly. What’s more, they need to be embraced in a timely manner. We do ourselves harm when we hang on to the stage of life we are leaving, and even more harm when we try to go backward, to look and act younger than we are.

The best attitude toward aging, Jung says, is to keep moving forward. In the autumn and winter of life, you must let spring and summer go, even if you feel you haven’t fully lived them. “Who ever succeeded in draining the whole cup with grace?” he said of life. To everything there is a season, and to get caught playing catch-up is like trying to correct one mistake with another. You run the grave risk of missing the old-age stage, too, becoming a failed elder. A failed soul.

Wisdom! What good is it until it joins with experience? Vanity will trump wisdom every time. If you can pass for fifty-five when you’re sixty-five, you’re damn well going to do it. Vanity will whisper in your ear, “Age is just a number,” or, “You’re as young as you feel.” And in our youth-worshipping culture, those whispers are echoed everywhere.

But time accelerates in the second half of life. There’s this little trick Father Time plays on us where a week starts to seem like a day. Everybody blessed with a normal life span experiences it. One day you’re fifty — the new forty! — and still rocking and rolling. A blink of an eye later you’re sixty, the new fifty, and maybe square dancing. Two blinks later you’re seventy-seven, which is more or less the same seventy-seven it’s always been: George’s age when he died. My age now, as the body in which I once semi-proudly lived grows smaller, shabbier. It has been a good ten years since it has reflected well on me.

Trying on a pair of pants in a dressing room, I notice anew how thin my legs have grown. I see in the mirror once again how visibly false my false teeth are. And in the side panels of the three-way mirror outside the dressing room, I see for the first time how hunched over I’ve become.

Oh, well. I’m accustomed to these little epiphanies by now. What’s one more? Then, for a second, in the mirror’s central panel, instead of myself, surprise, surprise, I see George. A shorter version, to be sure, because George was very tall. Jesus, I’ve never thought of myself as looking anything like George. Maybe it’s because he’s been popping up in my memories of late. Or maybe it’s just that all old people start to look alike.

It’s winter. Late February. There was an ice storm last night, but the roads are now dry. A few miles outside of town, driving over Martin’s Mountain to nowhere in particular, I look down into the long valley to the south, as I always do when I drive over Martin’s Mountain, but this time every branch on every tree for miles is ice-coated and glittering in the noonday sun.