I arrive late, as usual, paper ends flapping from my briefcase, crumbs clinging to my coat after a crackers-and-cheese lunch between stoplights. Picking my way across the muddy yard from my parking place in a tow-away zone, I glance at the glassed-in central staircase of the high school to check the time. No students are passing, not even dawdlers, so the third period bell has already rung. My Vietnamese pupils will be sitting in the Humanities Resource Room, patiently awaiting me, their teacher in transit.

It is my job to flit from school to school each morning, tossing out English sentence structure on the run to foreign students of all ages and origins. One stop at a bathroom or the principal’s office is enough to delay me. Then I frantically stuff papers, gather supplies and step on the gas.

On my way to the elementary school class, the one which preceded this one, my students passed me. Little foreign faces sailed by in school bus rows, waving at windows high above my Pinto level. They, too, were on the move, despite their immigrant parents’ hope of finding a point of rest in America. But when I straggled into class in our windowless store room, tripping over recording equipment on wheels (that, too, is moveable), they were already settled on folding chairs. I jabbered; they talked quietly among themselves. I was red-faced and distraught; they were shy and helpful. I tell my friends how satisfying my work is because they need me; the truth is, I need them.

The older students I am now approaching are more reserved but no less cheerful. They brighten the dreary building, in fact — that curious, flat-roofed structure on a barren field, whose leaky tin roof is now dripping all over the connecting walkway it was meant to protect. As I heave open the steel door with chicken-wire reinforced window slits, it occurs to me that its garish orange paint was probably intended to have a similar, cheering effect. Whatever happened to wood, I wonder.

As I proceed up the stairs the old, familiar uneasiness enfolds me just as it did when I was seventeen, helplessly entering my own high school. Others, like me, are robbed of personal force here. There are signs of their frustration along the way: thin grey carpeting slashed by a straight blade and later patched over, graffiti on the orange steel fire doors — not painted so that it could be washed off but gouged into the finish to assert — everlastingly? — well, till graduation at least, that “Brenda Jean has brown sugar.” When the bell releases its reluctant audience for a measly five minutes, lockers will bang open all along this hall to reveal further assertions of identity. Aggressively, defiantly, this year’s cold green cubbyhole is staked out with pin-up girls, rifle posters and the assurance that “State sucks.” Even those who have made it socially — the slim cheerleader tossing blond hair in her tomboy letter sweater and leggy short skirt, the beautiful couple holding hands, curled up safely for the moment in each other’s popularity and furling it like a banner — even they glance over their shoulders at the shy outsiders to make sure they are watching, as though awe could validate their own existence. How will my girls ever adjust to the desperation I feel on all sides? Or, coming from the heaving devastation of war, haven’t they noticed the shifting ground yet?

They aren’t girls really. As I enter the humanities library and find the first one, the younger one, I’m reminded of her womanhood. She is alone again. I have never seen a student at her table offering conversation or help, and today her Vietnamese companion is absent. She lifts her calm, full face to take me in and acknowledges me with a faint smile. I wave brightly, stupidly.

As I rummage in the proctor’s desk for the key to yet another store room the intercom switches on. My hand stops in mid-air. Even before the piped voice starts speaking I know the air is charged with an outside presence we are powerless to keep out. Talk at other tables is interrupted, animation wiped off faces. Heads rise like caged mice responding in a daze to the opening laboratory door and the expected dole.

Once, last winter, the announcement was startling. “I’d like to say a few words about snowballs,” it said, brightening the face of every student except Tan, who didn’t understand the language, much less the issue since bombs are the only kind of warfare she knows. But eyes flashed around her, full of mirth, checking each others’ readiness to pounce even though they couldn’t locate their prey. He must have been pacing behind very thin walls, to judge by his nervous tone. In regular classrooms teachers were studying their empty desk-tops or staring intently over their pupils’ heads to avoid recognizing the glee.

“Now I know we all used to enjoy throwing snowballs when we were kids,” the voice went on, ingratiating. “But I’ve noticed quite few of them flying around the entrance lately, and I don’t see any children.” He would have laughed lamely at this point if he’d had real faces in front of him. But his only accompaniment was static. The voice of authority was growing thin, and he was backed into a corner, so he lashed out with sarcasm, a teacher’s last resort. “Act your age, will you,” he snapped, in tune with the control switch. And it worked again. The students were disarmed, exchanging more timid glances this time, trying to laugh it off, seeking cover in their books until the next display of grown-up frailty drew them out. I tried to imagine the man behind the voice, whom I had never seen. He would be shuffling papers with a vengeance, barking orders to a secretary, perhaps, dissatisfied with his own distance, isolation and lack of effectiveness. None of their lives is easy, I tell myself as I approach Tan, who bears the burden of all this frustration.

She gravely stands to meet me at her vinyl-topped table surrounded by shelves of The Red Badge of Courage and annotated Shakespeare. Her dark hair falls forward to conceal her face as she reaches for her books; sand-colored arms enfold them to herself like a flower gathering its petals in the dusk, fragile, intact. Lips closed, she smiles on me kindly with the corners of her mouth as I lumber across the room, lop-sided with my heavy briefcase.

“No. I know where.” She is full of the pleasure of knowing something I don’t and being able to lead me to the spot. “The ma---maf room,” she states proudly.

“That’s right. She’s good at math.” I remember then that it’s the only subject either of them can be good at and ask her to take me to the lab, where Gai must be working with tapes.

As we leave the room a fat girl with her shirt tail out blocks our way. Her hair is short and brown. It retains the ridges from her rollers. There are creases in her white blouse where it’s tightly stretched across her middle. She lifts her arcs of eyebrow and stares ironically at Tan, who hugs her armful of books closer and lowers her head, creeping, it seems to me, into the tiniest possible space beside the door. “Excuse me,” the girl hisses, then steps deliberately into Tan. I watch paralyzed, suddenly aware that she is used to this sort of treatment.

When I join Tan in the hall, she doesn’t look at me, so she doesn’t see my indignation. Even if she did, she is too modest to associate it with herself. Instead, she hovers round-shouldered over her books, as though she were meditating on their closed covers. Vulnerable, I repeat to myself, walking beside her swaying, compact form and examining her out of the corner of my eye. Tennis shoes. No protection in them. And no warmth in that discolored, synthetic T-shirt. A well-meaning Christian sponsor must have dug it out of the Boys’ Tops bin at the thrift shop before she knew the sex of the “poor refugees” coming to her church. She probably hummed contentedly over her loot all the way home. Why didn’t someone tell her Tan would need armor? And where are all those tough young high school boys who squander their masculinity on teeny-boppers with braces on their teeth? Don’t they notice how graceful she is under this track team guise? Idiots, I sputter. Then I force myself to remember that they must cope with this seething school, the squared-off lots of their parents’ suburban homes, the false gardens of our shopping centers under glass. And their only refuge is the assurance of each others’ liking, which is just as transient. How could they possibly risk having such an alien friend? Besides, their mothers wouldn’t like it.

We open the door on Gai and find her impassive in the midst of chaos. She is wired into the central desk, intent on the messages from her earphones. The rest of the class resemble caged-up monkeys, hyperactive under the influence of the bars and the absence of their keeper. Two of the boys are walking a narrow ledge beneath the window while their friends whistle and shout encouragement. Three girls circle the teacher’s empty desk and watch as, above them, an innocent looking redhead with braids and freckles ties a note on a string to dangle from the recording apparatus overhead. A group of students are busily scribbling on the board at the back of the room. A few of them are pointing at Gai and snickering. She is totally unaware that her behavior is unusual. Sometimes I shudder when I consider the day my students will understand English.

When Gai finally notices my teacher-like, attention-getting gestures, she jumps up with her headphones on, trailing wire as she stacks her papers. Stumbling over cord, she unwinds it from the legs of her Levis and comes over with a worried expression on her round face. She barely reaches Tan’s chin.

“I fought you aren’t coming,” she says, leaving me to fill in the rest of her reason for being here.

“No, just late again,” I assure her, watching the relieved smile widen her face and narrow her dark eyes.

Silently, they fall in with me and we leave the jumbled classroom with its dislocated students. I stride at first, as befits my teacher role, but I’m slowed down by their tiny steps, quieted by the soft flurry of explanations in Vietnamese which passes over me, comforted to know that their words contain no malice. Walking between them toward our English class, I forget the locker-lined halls and the fear that they contain. These are survivors of a far more terrible fear, and they can afford to shelter a fugitive like me. 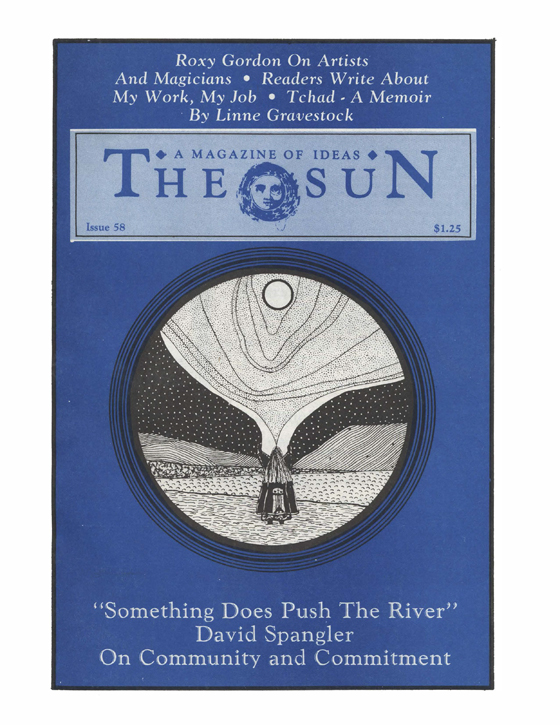 Something Does Push The River

David Spangler On Community And Commitment