Relax. Pull back, or surge forth — whatever draws me closer to some sense of unity with existence. No need to couch relaxation in terms of strictly physical rest. How can states of being segregate body from spirit? To relax is to find one’s position in this wonderful cosmic puzzle of love we call the Universe.

Often, however, the puzzle doesn’t fit together as we’d like. Internal struggle and tension tend to warp our form, and all attempts to force our shape to fit in its natural position in an unnatural way result in rigid perspectives and destructive insecurity. So in the end there’s a whole bunch of pushing and shoving, each piece determined to prove that it, and only it, holds the key to solving the puzzle, when really there is no answer at all — just unused love.

I like to drag my skinny body around dark streets at 6:30 a.m., sweating my guts out while being constantly harassed by hungry hounds, nearly run over each morning by blind drivers whose sole purpose in life, I’m thinking, is to wedge a bony knee into their bumper. I also enjoy going to religious services, provided the service attempts to expand, rather than contract, my consciousness. But as of yet, while sitting comfortably in a church pew, I’ve never even approached the sense of universal unity I’ve sometimes achieved while running.

Running is my particular means of relaxing, the simplest method I know of allowing my spiritual and physical self to reach out and touch and be touched by all around it. But relaxation hardly ends after I slide out of my stinking sweatpants. It’s really only just begun. Running is like a crystal drop of rain, a gift from God to nurture the closed bud into flowerhood. And to relax is to fully appreciate that gift, to capture in a frozen camera instant all of earth, self, sea and sky.

In these times of stress and spiritual transformations, I go for all the physicality I can get. That’s why I use orgasms to relax. Orgasms: the waves of the future.

I also relax by dancing and singing and general carrying-ons.

My mind has too much of a hold on me for me to deal directly with it. If my body goes wild, my mind takes off for safer zones.

But who is saying this: my mind, my body, or both? Is there any separation? Is that the key to relaxing?

My body asks my mind to shut up. Will it?

A rainy, grey winter day. Patches of snow shroud the hills, reminding me of the tattered, yellowed blouse of a beggar woman. My living room is filled with the warmth from hickory burning in the fireplace. I dream of spring and my escape into the sunshine. The winds gust with renewed determination. The hands of the old clock, broken for years, hold in an unchanging chevron. Sitting in the room where it is always 11:15, I nod before the fire and share the warmth with myself.

Having been a chronic insomniac for several years until eight months ago, I became something of an expert in methods of relaxation. Anything that I heard about, I tried. The first technique I seriously researched, after having given up on hot milk and little pillows stuffed with hops, was herb teas. I bought a book on tranquilizer herbs and concocted a brew of all the calming herbs I could find in the health food stores — valerian, catnip, hops, chamomile and lady’s slipper. I steeped it until it was black, added a generous dose of honey to make the strong taste bearable, and served it to myself and my room-mates. After a few minutes my friends murmured their goodnights and, one by one, staggered off to bed, while I spent most of the night reading. In the morning it took some shaking and an extra pot of coffee to get my still drugged friends off to work, but I remained unaffected.

Discouraged with herbs, I bought a relaxation training tape. “My feet are heavy and relaxed,” the tape droned. “My whole body is still and quiet.” This worked pretty well, but on the nights I really needed it, after a good party or just before a job interview, it, too, was inadequate.

I learned to meditate and to hypnotize myself, giving the suggestion that I would “go to sleep, completely relaxed, the whole night through.” This worked a little better, but, still unsatisfied, I learned Alpha mind control and released blocks through Reichian breathing. Each technique helped a bit more, until finally I visited an acupressure therapist who noticed immediately that one of my energy meridians was grossly out of balance. “I don’t know how you’ve been functioning,” she said. She had it corrected within three weeks, and although the insomnia ceased, I have continued to grow tremendously through the use of these many techniques. Looking back, that insomnia wasn’t such a bad deal, after all.

I relax by lying down, feeling my body and its relationship to my mind. I lie still long enough to sort out my desires and decide which of them to act upon. If I’m really keyed up, I take a hot bath or, if it’s summer, I swim and lie in the hot sun. Warmth from an external source is very important at times, whether from hot water, the sun, or another warm body.

I rarely have trouble relaxing when I’m alone. I am learning better how to relax when I’m around people. I just try to remember what I would do were I alone and act accordingly. I also feel out those persons with some warmth and stay closer to them to absorb it. I become verbally aggressive to break the stiffness of unfamiliarity. In fact, I can only be relaxed and quiet around a handful of people. The interchange of small talk communicates enough between strangers and casual acquaintances that they can generally know what to expect from each other. Everyone can relax a little from the chore of steeling themselves against the unexpected.

Music is such a constant part of my life that I can’t say I use it to relax. I find music can be stimulating, relaxing, irritating. uplifting. However, at times, certain types of music, especially Mozart symphonies, intensify my state of relaxation. Also when I find I can’t just lie and think without feeling as though I am wasting time, I knit while I think. But the key to relaxing is learning that it is all right to waste time. If I find I cannot relax, I force myself to investigate toward what end my excess energy is directed. If I can act to gain that end, I do so. Then I can relax. If not, I suffer from nervousness. But relaxation in itself is not a major goal for me. Rather it is the result of attainment of other goals.

As a very anxious grammar school child, I learned to enter an almost meditative state by crossing my eyes for long periods of time. This form of relaxation became so addictive that I got to where I could barely control the urge.

Anytime I found myself in a stressful situation, this automatic reflex would take over. I remember getting into fights and being pulverized for failure to hit the real target. I was also a big hit with the ladies. As a bashful adolescent I was often the target of cruel bets by the girls in my class; they would wager who could make me bury the greatest portion of my iris under the bridge of my nose.

By the time I reached high school my “relaxation” was pathological. I was referred to as “Captain Cross” and it became increasingly difficult to socialize with anyone other than the zombies on drugs (who thought my eyes were completely normal) or the real scabs of high school society, the ones with BORN TO LOSE and LUV tattooed on their knuckles — hell, they’d talk to anyone.

The worst encounters occurred in the military. My recruiter had assured me that no one would even notice my condition at boot camp. I imagine that his optimism stemmed from the fact that Vietnam was going full tilt at the time, but I soon found myself being referred to as “The Google Eyed Motherfucker.” No one would attend grenade practice with me, and I once marched across an artillery range and into a chemical ditch while following my split image platoon. That split image effect was also responsible for me staying in trouble, as I was unable to ascertain the correct rank of my superiors — was that one stripe or five? One bar or two?

Fortunately, I no longer suffer from my former form of “relaxation.” A few years ago I developed rheumatoid arthritis, and I now relax by pounding my afflicted joints with a ball peen hammer. 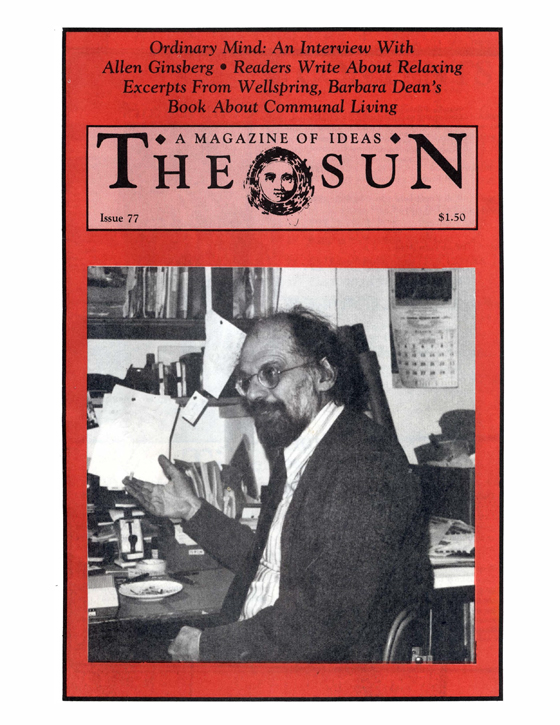 A Story From The Deep Country

The Poetry Of Pamela Perkins Atkinson

An Interview With Allen Ginsberg