We’re unsure whether to go. “I don’t want to hear about how we haven’t got much time left,” I lament. Earlier, I had asked Pete about it. “Survival,” he scoffed. “I went through that five years ago. You know, a lot of them talk about ecology, it’s fashionable, but underneath . . .” He waves his hand. “I don’t even go into Chapel Hill anymore. I feel better with the grits here in Carrboro. I can’t explain it. It feels different.”

On stage, those awful plastic contoured seats, a mute testimony to the awful plastic ironies of the time. Video cameras. Electronic gadgetry. All the panoply of the technological age. Stewart Brand, publisher of The Whole Earth Catalog, has arrived early to sell copies of his new magazine, CoEvolution Quarterly. He looks like a poker player under his wide-brimmed hat, but when he takes it off, his features are open and friendly, very American, very Western. The old Eastern prejudices, the big city paranoia, the down-home conservatism of the South, in fact the generally creaky and defeated mood of the nation on the eve of its 200th birthday, hasn’t yet ruined the California air, and Brand exudes a simple faith in man’s ingenuity in saving himself from his own ingenuity.

Down the aisle, Wilbur Hobby, the labor leader, is showing someone a magazine article about the growing gap between the rich and the poor. Like many who have spent so many years fighting what he calls “the good fight,” he seems to be only half-listening to his own words. The student he’s talking to isn’t paying much attention, either. I get the feeling he’s mostly concerned that his friends know he’s on a first name basis with Wilbur.

The other panelists arrive. Some 18 in all, a diverse tribe that somewhat self-consciously divides itself into those wearing suits and ties, and the rest. The ones wearing the suits are apologetic; they explain that ordinarily they dress like the rest of us. There are two women; no blacks; no children; and there is the moderator, Paul Krassner, like a welcome breath of foul air, suggesting that there’s a worldwide conspiracy to assassinate progressive political leaders.

Rep. Joseph Fischer of Virginia, decidedly practical, decidedly political, and decidedly out of favor with much of the audience, is explaining about the availability of resources, the quality of the environment, the role of government, and all those other late-twentieth century anxieties. He is not as alarmed as some ecological experts, which alarms the audience, some of whom scold him, during the question period, for his immoderately moderate stance. My attention wanders. I feel, like Pete, that I’ve been through this before. Somewhat peevishly, I reflect that when you strip away all the specifically human insistence upon a functioning and beautiful environment there is, in fact, nothing wrong with the way things are. It’s not that the resources aren’t being depleted. It’s just that if the world, and its atmosphere, and the beings it peoples, just as trees bear fruit, are truly one, then we are (on some level more profound than politics) creating exactly the circumstance necessary for our own evolution. Neal Cassady once said the only sin is fretting. So let’s stop complaining. Amidst all the moral and political ambiguities, we create our own reality. Only by accepting the inevitability of our situation can we change it.

We hear about the rights of other animals; we’re reminded that half of our harvested acreage is fed to livestock; we’re encouraged to create the alternatives rather than wait for others to do it; and so on. Somewhat guiltily, I realize I’m more interested in the panelists themselves than in the message. Peter Berg, for example, who calls himself a “planetarian,” talks about how we share the air with all life, and then walks to the side of the stage to smoke a cigarette. Then there’s the rotund Wilbur Hobby, urging us to wrest power from the “big boys.” Earlier, I had stopped by the offices of the Population Center, which organized the symposium. I saw people rushing around, someone complaining he didn’t want to “babysit” for Wavy Gravy (Hugh Romney, Voice of Woodstock). A general air of madness, no different from any corporate headquarters on the day before the board meeting. An editor I used to work for talked about the diplomats who knew how to deal with all of China but couldn’t get along with their own wives. Lenny Bruce put it even more succinctly: “We’re all the same schmuck.”

The next day is Survival Day. I look forward to talking to Krassner. He’s the editor of the Realist, which used to be my favorite magazine. “The truth shall make you Silly Putty,” was its motto, when I read it regularly, about 10 years ago. Very hip and scathing and clever. When I walked up to him, he was talking to a pretty young woman. She seemed a little nervous, and was laughing a lot. He looked like he was enjoying himself, and didn’t pay any attention to me. I was nervous, too. I dropped the magazines I was carrying. A few minutes later, still waiting for their conversation to end, I dropped them again. He turned to me and said, “Would you like some scotch tape?” I smiled embarrassedly, handed him THE SUN and walked away. Now . . . why did I want to talk to Paul Krassner? Because he once wrote, “Lenny Bruce, I place upon your grave the bronzed hymen of Lynda Bird Johnson”? Because he once enraged his readers with a brilliant and tasteless satire on the Kennedy assassination in which he described how Johnson fucked JFK through the bullet hole in his neck?

Now, Stephen Gaskin is someone else I wanted to meet. Stephen, around whom more than 500 people have gathered on The Farm in Tennessee, is a spiritual teacher whose emphasis on honesty, hard work, and genuine fellowship attracted me to him a couple of years ago. “To win the love of an honest square,” he says. “Do that, and you become effective in the real life world.” Simple. Maybe too simple, but helpful, nonetheless (like all those other cliches we’ve been hearing. They wouldn’t be cliches if they weren’t.). Or, how LSD helped, but after you’ve broken down the door, torn it from its hinges, kicked it, hurled it across the room, “That’s enough, right? . . . I hear some people say acid’s a rocketship. Well, peyote’s an oxcart. But you know, it’s only a mile to town, man. You can walk.” Or, how a good spiritual teacher must function excellently in the material plane, because it’s just as important that he knows how to fix a car as to perform a wedding. Or, how it’s necessary “to live a stoned lifestyle all across the board, not just twenty minutes a day.” Anyway, after Stephen finished his talk, I realized I didn’t need to ask him anything, that there was no reason to touch him. For he had reminded me, again, that the answers are within, that we learn from others insofar as we listen to ourselves.

Later on, Dick Gregory caused a fuss when he denounced someone in the audience for suggesting that he was speaking nonsense about birth control pills (Gregory said they caused cancer). I wasn’t there. I was in the parking lot, talking with a friend about jealousy, working, just as hard as Ralph Nader on General Motors, on my personal survival. The karmic moral might seem obvious. God, bent as He is on our survival, hams it up sometimes. 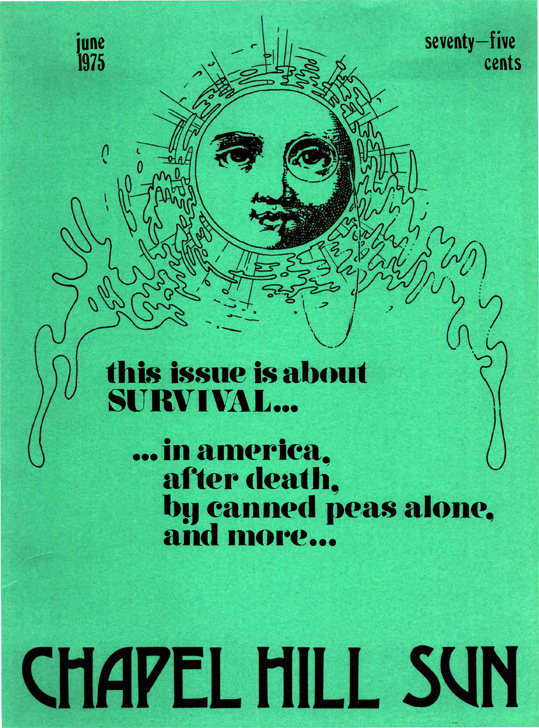