September 11. Male and female created he them. What is the truth, the mystery of that difference?

September 17. He held me and called me his buddy. Funny. I hadn’t thought of him as a friend so much as a lover.

September 23. Sometimes I wonder if I am trying to manipulate even god with my goodgirl stratagems.

October 6. I say I want a lover. I suppose to have one I must be one first.

November 1. Is it him I’m interested in or am I interested in being interested? The man himself or the fact of his manhood? Why must I relate to men so differently than I do to women? (Maybe because they are different.)

November 6. I besieged him with honesty and self-revelation, attempted to fascinate him with a glimpse of the molten gold at my core.

November 16. The illusion was that he’s impulsive like me. The reality is that he’s scared like me.

November 22. What do I want from a lover that I can’t give myself? Understanding. Correction. Intimacy. Touch, sound, holding. Contact with the sacred heart of another.

December 4. The more deeply I penetrate my motivations, the more ego dynamics I find, the more tricks and traps for the soul.

January 2. I gave him criticism on the overweening masculinity of his style. He responded with detailed instructions on how to fuck in the sun.

January 3. I feel remorse for hurting his feelings, if I have, and regret that I probably haven’t hurt them much at all.

February 12. My simple failing is to wish that this peak could last a lifetime, and that my lifetime may be long.

February 14. Feelings pass in an instant and their memory becomes awkward, an embarrassment.

February 27. I hate to think that our joy in bed was a triumph of technique over skepticism.

February 28. We were disconnected from the start, a reality that remained unaltered by our competent, loveless sex. Highly instructive disillusionment, but not worth what it cost in sleep.

March 6. I didn’t believe that in his self-confession he spoke the truth, had no idea how that truth would feel in practice.

March 13. Today I pondered the difference between delusion and deception.

March 14. Which of us was the wiser? And what’s wrong with a surrender to passion? It’s as good a thing to do as fulfill an obligation, but there was no way for us to do both.

March 19. Did he feel like someone had grabbed his image like a doll and run off to play with it? Did he stand there horrified, watching the doll thrashed against the wall for not responding?

April 27. How could I have been so blind to the man’s essence? It was the vaporous opium of sex. I always confuse it with love. That’s a lot to ask of either.

May 1. My vanity was injured because my self-revelation, my skilled dissection of my outsize half of the relationship, didn’t beguile him.

May 2. There are bunches of us, so infected with our individuality that we just won’t commit to another, no matter how hard we think we’re trying to do just that.

May 13. I think what he was saying last night is that he likes me too much to love me.

May 21. My hopes metastasize into expectations too often. Hence I quaff this bitter brew at the no-holds bar, nursing a grudge with a self-righteousness chaser.

June 11. I have let myself be entered by them, and changed. Their withdrawal is painful. I don’t want to be left, but I’d rather be alive than insensate, so I’ll take it all as part of life’s sweetness.

June 12. It takes bad pain to drive me beyond my fear of that unknown on the other side of change.

June 17. Slowly I’m coming to understand pain, not as a mark of failure, but as the emblem of risk-taking humanity.

July 4. Why not sympathize? Why not comfort? Is anyone’s suffering deserved? Does withholding kindness or judging another’s mistakes benefit anyone? No. Our job is to love and empathize and then do that some more.

August 6. Far less touching in my life. Sleeping alone all of a sudden. I wonder what that’s doing to me at the levels where my mind won’t go?

August 7. The relationship worked until it didn’t, after all. I guess I should remember that.

August 23. Too much turmoil in my life. The death rattle of old habits of thought, the clinging to expectations. There’s no way to detour around the shit-pile, no way out but through.

October 29. It’s panic that kills swimmers on the night-sea journey.

November 4. Slowly I began to love the storm, seeing it as a manifestation of the goddess’ transcendent power, infinitely wise and no doubt right, but wholly unreasonable, unseasonable, and inconvenient to mere mortals.

November 5. I will definitely keep trying, keep on turning over those rocks, giving myself over to the big chance, never mind the fears and betrayals and departures and absences.

December 25. Now I’m accommodating reality, making the pearl, laying down nacre on the provoking grain, making it beautiful, mine, and whole within me.

January 1. God. Please let me learn how to pay attention, just pay attention to the other person, and to become transparent myself. 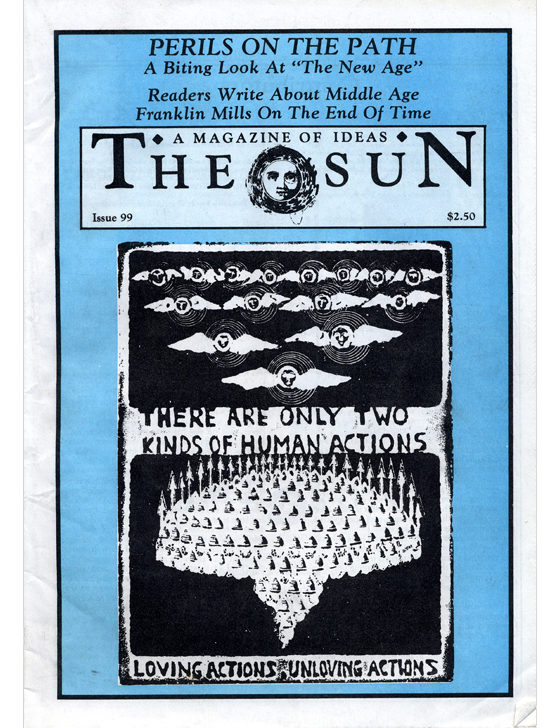 What In The Name Of God?