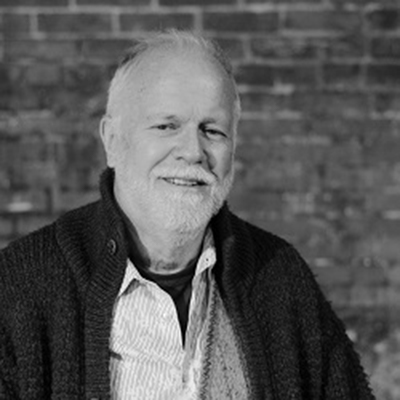 Jim Ralston has entered old age with faith, hope, fear, and trembling — the same mingling of strengths and shortcomings he has always felt. He teaches at Blue Ridge Community and Technical College in West Virginia.

The desire to hang on to youth for as long as one could — to see that as greed was new to me, and the idea had deep implications for how I saw myself.

Out Of Our Reach

I’m a new face in the therapy group. / My wife’s ultimatum drove us here tonight. / And when my turn in the circle comes / to say what I’m feeling right now, / my tears surprise even me.

Long after our last slow day together, / say, a campfire, a walk in the woods, / getting lost and not caring

The owner of the sports bar knows I sleep in the parking lot on weeknights. He doesn’t seem to mind. I’m a curiosity — the homeless professor. He thinks I must be one of a kind, but I’m not so sure. Anyway, I’m not even a professor. More like an adjunct instructor. I’d move closer to work, but I could never afford to live in Martinsburg now that it’s becoming a D.C. bedroom community.

Dying looks a lot like being born, I think standing over him, my fingers resting gently on his broad back. The contractions come in waves. Each time they are more intense, start earlier, last longer. Only now the body itself is the womb you leave behind.

This month marks The Sun’s twenty-fifth anniversary. As the deadline for the January issue approached — and passed — we were still debating how to commemorate the occasion in print. We didn’t want to waste space on self-congratulation, but we also didn’t think we should let the moment pass unnoticed. At the eleventh hour, we came up with an idea: we would invite longtime contributors and current and former staff members to send us their thoughts, recollections, and anecdotes about The Sun. Maybe we would get enough to fill a few pages. What we got was enough to fill the entire magazine.

Thoreau was not afraid to die for the same reason he was not afraid to leave Walden Pond after two years, two months, and two days. Why did he leave? He said he had several more lives to lead. To be born means to die, but Thoreau was one of those who saw also that to die means to be reborn.

Balancing On The Wind

On The First Anniversary Of The Death Of Our Love

June 1990
What Do You Think? We love getting letters to the editor for our Correspondence section.
Has something we published moved you? Fired you up? Did we miss the mark?
Send A Letter