Orson has stopped asking me to marry him, but every once in a while he says something to let me know that the offer still stands.

“If I could do this every morning for the rest of my life, I’d live to be a hundred and three,” he says, soaping my stomach. His hands linger on the topographical features he most admires. Although the dirty water backs up around our ankles, it doesn’t mar Orson’s vision of the shower as our fountain of love. Our landlord must wonder about the water bill.

“Why not a hundred and twenty — like the man in the yogurt commercial?” I ask. Having said it before, I refrain from the obvious comment that when Orson is a decrepit hundred and three, I will be a sprightly eighty-two. Right now he’s the same age as my father.

“I don’t want to lose my good looks,” he says

Lest he become too vain, I duck him. But it’s true and I’ve told him — he’s incredibly handsome. Unlike most men in their fifties, he doesn’t have a paunch (a result of good genes and little alcohol, I think), and his weekend carpentry (sawing, planing, sanding, hammering, varnishing) has kept his muscles Nautilus-toned. To guess his age, you have to look closely around his eyes; there the skin’s as crinkly as those tiny parasols they stick in exotic drinks.

Sometimes his good looks, like his money, embarrass me. I take a certain pride in being a frumpy graduate student, too concerned with matters of the intellect to bother with make-up or matching handbags. When the secretary of the history department spotted Orson in his dapper gray wool suit at a Christmas party, she whispered to me, “Now we know what you see in him.”

But what does she know about this kooky, kind man whose toy-designing workshop is the city’s biggest employer of legal aliens? Orson tells me that I shouldn’t worry so much about what other people think, but I do.

After our shower, we get dressed, I in my sweats (my uniform for the mostly mental exercise of writing my thesis) and Orson in his overalls. While I fetch the paper from the stoop and get a head start on the front page, he grabs the timer from the kitchen and goes out to the porch to meditate. I can’t imagine how anyone could reach a transcendental state with the constant tick of the Minute Minder suggesting that at any moment a pressure cooker full of carrots may explode, but Orson has far more positive associations with the kitchen than I do. His first wife, Lena, introduced him to the twelve-minute meditation, and it’s one of Orson’s mysteries that I do not probe.

I liked Lena when I met her, although I expected someone warmer — and perhaps a little less beautiful, since Orson never mentioned her enormous eyes. The irises alone are the size of Hershey’s Kisses. After their divorce, she went back to college to become an archaeologist, so she’s always carting shards back and forth from Togo, stopping off at the university now and then to give a lecture. We go. She and Orson still correspond by postcard.

When Orson returns to the earthly plane, he joins me on the living room sofa, where we discuss the vicissitudes of Brenda Starr, Reporter, as well as other noteworthies in the news. For breakfast, I usually fix us a slice of pound cake and a glass of milk. Although cooking is not my forte, in the course of combing through turn-of-the-century cookbooks for a women’s history seminar I discovered some outstanding recipes, including mocha almond pound cake. Orson renders it wonderfully.

His domesticity never fails to surprise me. When my last lover, Larry, took responsibility for a meal, he’d stop off on the way home from the hospital at the deli for some heat-and-serve pasta. Any effort I put into the household was automatically quadruple what Larry contributed. But with Orson, I kind of keep a running tally of things like how many sinks full of dishes each of us has washed so I don’t fall too far behind him.

“Stop counting,” Orson says when I tell him he’s doing too much.

“You shouldn’t. Make a deal — if there’s something I feel you should do, I’ll tell you,” he says.

Although Orson doesn’t dwell on his years with Lena, I do know that they couldn’t have kids. She couldn’t. Playing psychiatrist, I figure Orson started taking care of the house so Lena wouldn’t feel she had to make up in housekeeping what she failed in motherhood. Orson thinks it’s an interesting theory but says he just likes to tinker. My mother, who’s disapproved of all my living arrangements ever since I left home, warned me that “he’s just an old man looking for a field to plant his seed.” My worry is that we’ve missed the growing season.

About 8 o’clock, I kiss Orson goodbye and walk slowly and painfully to the guest room where I am bivouacked for the duration of my dissertation. As if I had been playing solitaire, piles of chapter drafts and notecards are spread out strategically across the floor. (When Orson first saw all this paper, he asked, “Are you building a nest?”) On one of the twin beds I have stacked all the books I have been able to check out of the library, but I try to keep the other one free should sleep or despair overcome me.

Why is this so hard? I am writing about something I know and love: twentieth-century dolls and how they have mirrored society’s expectations of the girls who played with them. (Orson and I met when he came to hear me give a lecture.) But every time I sit down at the typewriter I am confronting more than my mounds of research. Graduation for me is not a bright light at the end of the tunnel but a black hole of indecision. Who am I if I’m not a student? Am I ready to teach? All those sophomores copying my words into their spiral notebooks, believing that this is what their parents are paying $10,000 a year for. Does this mean that I’m a grown-up? I’m thirty-one, and my biological clock is beating like a tom-tom in my ear. And always I ask, what about Orson?

Today, I shifted in my seat for about half an hour before deciding that I needed a cup of coffee. (That’s just about a record; it took me six months to decide to accept Orson’s invitation to move in.) As I stepped on the runner in the hall, a board creaked underneath; it scares me how empty the house and I feel when Orson has gone.

In the kitchen, I picked our mottled kettle off the stove and leaned to fill it from the faucet. On the counter was a brown bag — lunch — which Orson must have forgotten.

I looked at my watch: 8:38. He had to walk five blocks to the corner; maybe I could catch him. Lunch in the basket, key in hand, I unlocked my null-speed bike and peddled straight out the driveway.

I remembered when I was little how my mother used to race my father to the station. If the train was just starting to leave, my father would sprint from our station wagon to the platform, running beside the last car until he could grab the handrail by the steps and leap on. The Long Island Railroad had a very apt slogan: “Home of the Dashing Commuter.”

If he missed the train, my mother would pursue it, maneuvering down potholed lanes and through blinker intersections in order to avoid the traffic lights. As I squealed with glee in the back seat, my father urged my mother on, and their frantic kiss before he leaped out of the car was as passionate as any I remember (a la James Bond). Before electronic doors and one-way traffic put an end to their fun, my father said that the men in the club car used to wager on at which station he would catch the train.

It really didn’t matter whether my father made the 8:32 or the 8:44 into Manhattan; what counted was the chase — how many near-misses with garbage trucks, how many imprecations hurled at dilatory pedestrians. I remembered those rides this morning as my bike whizzed past the pink blurs of azalea bushes, because the principle was the same: Orson could afford to buy himself a steer for lunch if he wanted to, but I suspected that nothing would please him more than his own liverwurst sandwich express.

Three-fourths of a block to go, I noticed Orson stooping to avoid some willow branches weeping over the sidewalk. As he twisted, he spotted me. Surprise, happiness. He looked to the right, saw his bus driving up across the street, but stopped, ready to miss it for me. I looked left. No traffic.

“Run, Orson,” I yelled, holding up the lunch.

Sprinting, he reached the front fender of the bus one second ahead of me. I passed him the bag as if it were a relay baton. Orson hopped on the bus.

As I turned around, the driver and everybody with a window seat was grinning. They’d just seen two lovers catch each other in the nick of time. 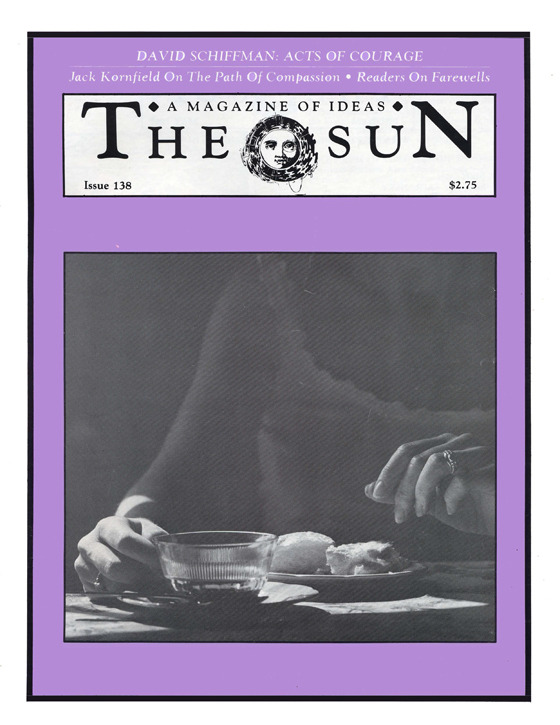