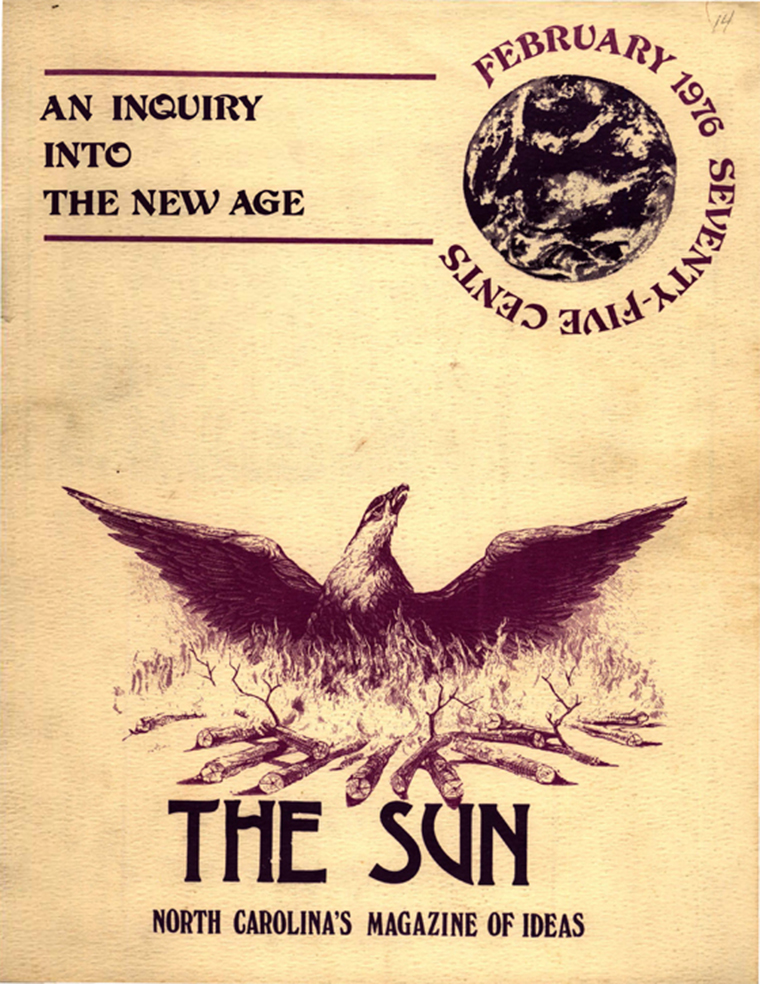 They say the New Age has arrived, that our consciousness is being raised, that we are witnessing a new stage in our evolution. Though I don’t consider myself a pessimist, it’s hard for me to overlook the spiritual apathy, old-fashioned greed, and general selfishness that seems to pervade our civilization. The advent of a beautiful New Age is difficult to see when the nasty old ways still predominate.

The New Age Journal, which grew out of a feud at the East West Journal here about a year ago, and was started by Robert Hargrove who used to be an old honcho in the Muchio Kushi, Erewhon, East West Journal and East West Foundation Empire, is starting to come out with some interesting New Age journalism. I was at the office the other day and found out that Hargrove no longer runs the thing, instead a married couple named the Utnes, that weren’t there. The whole staff went into the EST training program a few months ago, which is something of a rage about, since the training seems to cut through boundaries of age and class that haven’t been broken down by any of the other integrating philosophies except maybe TM, which has gone so far as the front of TIME, which is probably about the farthest an alternative anything can go before it starts being something else. EST stands for Erhard Seminars Training, and they are run by the blue-eyed beauty Werner Erhard and his assistants, and are huge T-group type things where everyone learns to just be. Werner Erhard is not the guy’s real name. In the article-interview in the New Age Journal, he says, “It’s all a con . . . you can’t avoid it,” which includes himself, Werner Erhard (alias), who means that everything in your whole life is a con including the notion that you are an integral, separate human being who determines his whole life. For two hundred and fifty dollars, EST will con you out of believing that, and con you back into it. There is a great deal that I don’t know about it, and many people, all kinds of people, think that the training has brought about profound changes in their lives. (Something like the realization: Who the hell else would I be being?)

Out Of The Many, One: The Aquarian Promise

Time passes; the progress of life displays itself as the panorama of history. Human growth, the rise and fall of civilizations, follows the inevitable pulse of change as it etches evolution with millenia, epochs, and eras. Human growth can be measured by the climatic changes that have determined its course. Just as a plant’s life may be marked by the procession of day, night, day, night, day, so may human growth follow the civilizations of Mesopotamia, Egypt, Crete, Athens, Rome. Life can be viewed as growth, organically and cyclically; the understanding of the present, the eternal now, is cultivated by understanding how the seeds of the future take root m the soil of the past.

A wave of psycho-chic New Age seminars has surged around the planet in recent years — each promising its own version of improved spiritual vigor, inner peace and transcendence. There’s a program tailored to meet each and every ego and wallet size — which is not to suggest the benefits aren’t real. They are. You just have to be able to afford enlightenment these days.

Seth, the “personality” who speaks through author-medium Jane Roberts . . .

Seth, the “personality” who speaks through author-medium Jane Roberts, offers one of the more novel interpretations of the Second Coming: that the personality known as Christ was, in fact, three men — Jesus, John the Baptist, and Saul or Paul — whose lives became confused in history and merged. There are reasons the Christ entity did not come as one person. For one, the full consciousness of such an entity would be too strong for one body. For another, the entity wanted a more diversified environment. In any event, the third personality of Christ, whose return has been prophesied as the “Second Coming” (Matthew 24) will emerge soon. It will not, Seth says, signal the end of the world, as the prophecies have maintained. Also, the “new religion” following the Second Coming will not be Christian, in our terms, although the Christian personality will originate it. A new era will, however, begin — not a heaven on earth but a more sane and just world, in which “man is more aware of his relationship with his planet and of his freedom within time.” Seth says:

Over a hundred years ago, Walt Whitman proclaimed a New Age that would come to this, the country of democratic experiment, and which would sweep the world with a fraternal New Order. Few poets have ventured so much optimism in their work, and few have lingered into our day with such resounding and contemporary truth.

Economic theory is sometimes cloaked by a mysterious aura, because it represents an abstraction from physical reality. Yet, there is great potential for the application of economics to provide stable material welfare for all humanity. The problem is to identify the right policies and establish the organization necessary to fulfill the simple goal that all persons receive certain undeniable economic rights.

Living in a college town has always seemed to be one of the more subtle and better-natured forms of masochism. In its positive and lighter sense this desire for pain manifests itself in the form of cheap, old movies, free umbrellas and unmatched gloves in any lost-and-found worth finding, saunas for the Nordics, free toilet paper for the light-fingered, and the Perkins Library world famous collection of necrobilia on the Dukes of Durham. Still, there is a darker side and while we all writhe to the beat of a different whip, it seems to have something to do with the sweet nausea of deja vu. Observing the ashen complexions as students stumble out from the psychic numbness of a particularly deadly session causes my own mind to drift gently back to my early college days at the University of Massachusetts. As a lower, middle-class haven from blue-collar backgrounds and futures it is, no doubt, a way of life so alien I will have to explain.

I sit in my home and write. Through a window, the sun shines warm and bright upon me. I feel relaxed, sensual, good in the radiance of the sun. I move into another room to get a book. The sun cannot reach me through the walls, and these rooms are darker and colder. If windows did not exist in this building that is my home, the sun would not brighten my life while I was indoors. These windows are, in effect, a channel for the sun. A channel is that by which something passes or is transmitted. The rocky river bed allows the rain waters to flow together on their passage to the sea. We are all channels, we are all vehicles through which love and wisdom (or negativity and ignorance) can pass. A meal prepared for friends, a poem, a painting, a greeting are some of the ways we channel the gifts that make us who we are. I have frequently heard “channel” used in an esoteric, awesome way, a channel being a unique someone who possesses difficult-to-attain knowledge of the most secret wisdoms of the universe. We all have this knowledge. We all manifest our awareness of these secrets in different and unique ways. Some of us write about psychic phenomena and some of us drive a bus. Some of us publish a magazine and others help a plant or baby to grow. Ad infinitum. WE ARE ALL CHANNELS, and what we know, what we feel, who we are, determine what we channel. Every day numerous messages channel through us, and the effects of our behavior, our transmission, is powerful and influential.

The New Age — An Introduction

The New Age — what is it, anyway? Another fad? A hustle? In a society so given to instant enlightenment and the quick buck, slogans like this, especially when they’re used to sell everything from shampoo to magazines, are as suspect as Guru Maharaji in his silver Maserati. If Nixon, talking about democracy, made one weep for America, what tears are left for God after enduring all the gassy profundities and bogus compassion of a new generation of spiritual aristocrats? When the unutterable becomes the meat of conversation, the impulse is to chase everyone from the room, the conscientious seekers as well as those just along for the ride.

I have been asked to submit my dreams to Bardic tests. For years I have allowed innuendoes from my dreams to slip into my daily affairs. Now my friends and acquaintances have grown weary of dividing these dream outcroppings from my intentional deceptions and mystifications. Some warn that I divulge my personal mysteries too recklessly, others complain that I am overly-secretive. Unanimously they demand that I give a full and precise account of all my activities in the Lower Astral Plane — as if this were a simple matter of translating a text from one language to another.

It was The New Age and there I was on the elevator — 68th floor, 15th floor, 43rd floor — thinking: bongs will never totally replace joints. Bongs have their place, sure, a big place. But a joint is a . . .

Earth as a planet needs tending to