I was flirting more that summer than ever before or since, but I had a dull and temporary job at a convenience store, with the prospect of serious employment in the fall; I was new in town and unattached; and there were, apparently, plenty of lesbians in the neighborhood, or at least on their way home. I was especially interested in two women, one of whom came into my store over the radio.

She was a disc jockey for the college station I had happily discovered and from which my dial never budged. I didn’t know exactly when this particular deejay came on, but I always recognized her low, smooth voice, a voice as creamy and subtle and exotic as a perfectly ripe avocado. She drizzled it sparingly over the airwaves, keeping me on edge, making me want more. Hers was a voice to bottle, to bathe in, to eat.

I called her one night between customers. I would simply die, I told her, if I didn’t hear “Lovecats.” “But I’ve already played The Cure,” she protested, explaining that she couldn’t possibly play the same group again. The sky that day had been huge and clear, and I had let go of my own clouds; I was feeling expansive, in a perfect mood to flirt. I decided it would be more fun to coax her into playing my request than to give up. She seemed receptive to my playful persistence, not responding with the arrogant finality typical of the deejays there. She answered, instead, with a no that trailed into ambiguous silence; then, as I was giving up — not wanting to push my luck — she led the conversation away, using the wit she was so quick with over the air. It didn’t dawn on me until I had to get off the phone that she was flirting back. “I have a customer,” I said, and hung up without further explanation, smiling to myself. My shift lasted two more hours, but the song never played. My charms, though undeniable, were proving their limits.

The phone rang as I was getting off work. “Swift Stop,” I said, bored and controlled.

“What was the song you wanted to hear?” asked the voice — the voice, the avocado voice.

Something in my stomach began to melt and trickle down. I laughed, less controlled. “How did you know where to find me?”

She explained that she came in sometimes for Cherry Cokes and had noticed I kept the radio on her station. When I’d called, she’d recognized my voice. I asked her please to introduce herself next time. Driving home, I rolled my windows all the way down and, when “Lovecats” came on, turned the volume up full blast.

All I knew of this woman was that her name sounded pseudonymous, that she played amazingly wonderful music, used cleverness subtly and unfalteringly, and cast spells with her voice. Also, having flirted with me quite blatantly, she was probably — possibly — a lesbian.

I knew even less of the other woman to whom I was drawn. I never had the presence of mind to read the name on her gas credit card. When she walked in, I would drop change or forget to make it, lose my pen under the register, or suddenly run out of popcorn. She slouched up to the counter almost daily, bangs falling into her huge, heavy-lidded eyes. I’ve always loved such eyes, full and droopy, as if ready to shut out the world to visit a dream. She spoke to me with studied indifference, saying little and smiling without showing teeth. Even so, her smile was incredible, delightful. She had a long, thin mouth, etched at the corners with vertical lines. One corner stretched out before the other when she smiled. Her mouth was one a child might draw, an endearing mouth, a mouth I wanted to taste.

The deejay was on the periphery of my world, while the woman with the heavy eyes slouched into my dreams and permeated my thoughts from the moment I awoke. I tried a few times to warn myself: you don’t know anything about her, I would lecture. Maybe she’s stupid or boring. Maybe she listens to Wham! and kicks cats.

Each long and light summer day, my crush on this woman weighed more heavily on me — it was unbearable. I could scarcely talk to her, couldn’t even maintain eye contact. As soon as our eyes connected, I shifted mine, hoping my cheeks weren’t turning the color of passion. My heartbeat increased, and my knees felt like butterflies I was trying to pin down with positive thinking. She seemed to catch my eyes as they fluttered away, and she smiled at them wryly, knowingly. After buying cigarettes or cashews or a soda, she would walk outside and get a newspaper from a box. I thought of leaving a note there, but of course I couldn’t be sure she would get to it first. And what would the note say? I couldn’t even think of ways to begin conversations, though I practiced opening lines on my reflection in the medicine chest as I got ready for work. I thought of clever lines and sincere lines, but the clever ones seemed strained, and the sincere, ingenuous. Besides, when she appeared, my thoughts went liquid and my mouth went dry.

One evening, she laid a fifty-cent piece on the counter with a flourish, a gallant gesture that fell between a bow and a curtsy. Her mouth spread to the right, and her eyelids lifted into her bangs. Her eyes emitted sparks, which burned against my cheeks and spread warmth all over my face. My fingers fumbled dumbly in the register, trying to isolate two quarters. I gazed after her as she walked — swaggered — toward the newspapers. The lovelier she was, the more embarrassed and tongue-tied I became. The store was empty. I could follow her to the papers, say something. But I was too stunned to move, and the act would have been too conspicuous and vaguely canine. I pulled a pack of Salem Lights from the rack above me and lit a cigarette, though I’d quit smoking months before. I glanced at her out of the corner of my eye, blowing smoke in the other direction. To my dismay, she seemed as absorbed in the news as I was in my cigarette game.

By the following Friday, I was so disgusted with myself, so hopeless about my prospects of starting something with this woman who stole my aplomb with a twist of her lips, that I decided to act. At this point, if a move on my part chased her away, I would be relieved. I had the night off. I would go to the store at 7:30, since she usually showed up between 7:45 and 8:30.

I felt ridiculous hanging out at a convenience store, but the woman on duty had strong lungs and a slew of dreary stories, and I knew I could just smile and nod and look anxiously out the glass doors. I bought an orange balloon and blew it up. I greeted regular customers: “Hot enough for you?” I was hoping to learn a good rejoinder to this befuddling question I was so often asked by these Southerners. I soon decided that it must be rhetorical, since no one else seemed to have an answer, either: some grinned or grimaced or rolled their eyes; others took the line as a cue to make their own comments about the heat. Between conversations, I shifted a lot from one foot to the other, and squeezed my balloon so that it squeaked against my fingers. My woman never came — I had failed to conjure her.

I headed home at a quarter to nine, demoralized and self-mocking. What a dope I was, thinking this goddess would come in on a Friday night to buy cigarettes from a blushing cashier.

When I got home, I decided to call my deejay, whose voice I had found in my car on the way. She greeted me with a warmth that conveyed recognition. I asked for a song by Klaus Nomi — something obscure and interesting — and she asked me to hold while she rummaged around the station. I was hardly disappointed when she didn’t find it; I knew that her having me wait hadn’t been insignificant. I was even happier when she pushed the conversation further instead of hanging up. “You haven’t come to the store since the last time we talked,” I complained. She told me that, on the contrary, she’d been in many times. I was shocked. “But you haven’t introduced yourself.”

She described herself in vague terms — thin, with brown hair. My mind couldn’t produce a face, only a thousand brown hairstyles. “I told you I go there for Cherry Cokes,” she said, implying that I hadn’t been very observant. “I also get gas, and sometimes change for newspapers.” A curtain was opening slowly inside my head, and I allowed myself to verbalize a thought I was wary to form. “Did you get change for a fifty-cent piece earlier this week?” And yes, she had, she was the one, she was both women. 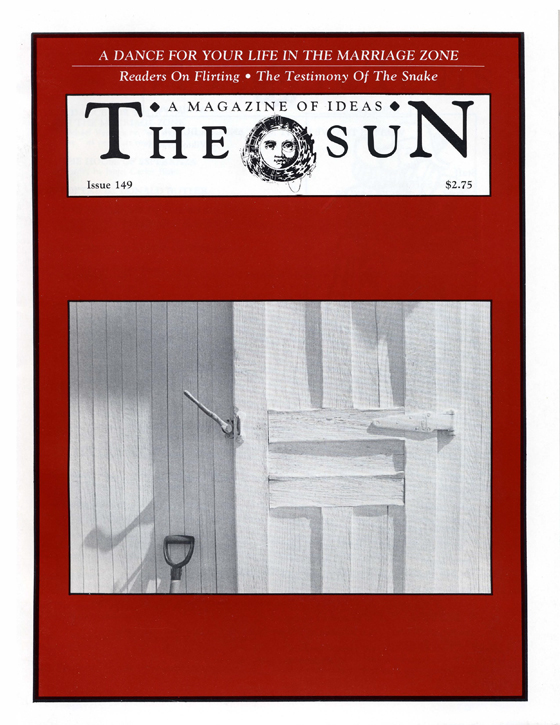 The House Of Esperanza