I didn’t understand what he meant when I first heard John Lennon sing, “No one can harm you. Feel your own pain.” But I knew his words were true, just as a sudden change in the weather is true, just as the alarm clock with its shrill ring is true.

At the time, I wasn’t accustomed to letting myself feel much of anything. The idea that we’re all wounded, and spend much of our lives denying it, was an abstraction to me — a “meaningful idea,” not a lived awareness. But I’ve changed, and through the changes Lennon’s words have been a kind of koan for me, simple yet perplexing, no less a riddle than my own heart. They speak poignantly to my stunning forgetfulness, my odd amnesia about my emotional life, reminding me that every time I deny my woundedness, I deny myself.

I needed the reminder recently, and it arrived right on time, with an emphasis hardly less dramatic than if Lennon himself had appeared before me, radiant and ghostlike, to whisper the words in my ear.

It was a wet spring day, and it had finally stopped raining. I was out running, feeling dark and sullen despite the fleecy clouds and flowering dogwoods, brooding about the argument I’d had earlier that week with my wife. I’d overheard her joking with another woman about some man, the kind of benign innuendo I knew wasn’t really threatening — except, alas, to me. It’s as difficult for me to trust her, or anyone, as it is for me to admit it — unless I veil my distrust with cleverness, or, if I’m really threatened, with an argument that lasts for days.

It was the kind of argument that called forth the child in me, called to him the way a child is called from sleep. He came into the room, groggy, uncertain, needing reassurance. But he was ignored — by my wife, because I wouldn’t tell her he was there; by me, because I wouldn’t acknowledge he existed.

Mostly, I argued with myself. Since Norma insisted her remark was innocent, and I was unable to prove otherwise — or to be honest with her about the depth of my fear — I sulked. I didn’t address my real heartache: that, as a child, I’d felt betrayed again and again; that I’d learned to deny my pain, to betray myself, like an animal, caught in a trap, that chews off its leg to escape; that I still betray myself by ignoring my feelings, and thus fear betrayal by others in countless, subtle ways.

Past shops, past houses, past bleary-eyed students on their way to class, I ran, running again over the argument. Climbing a hill, I lengthened my stride, legs pumping, the beat of my feet on the pavement a counterpoint to the voices in my head. The rhythm of my body was familiar, predictable, and so were the voices, a chorus of discontent. I blamed Norma, for her feelings. I blamed myself, for mine. Yet, as I reached the crown of the hill, sweat pouring down my face and body, there was another voice, cutting through the din of accusation: John Lennon’s voice, with its old refrain, reminding me not to steal my own heart away then pine for myself. No one can harm you, my blood sang. Feel your own pain.

After all these years, why couldn’t I remember? Why did I still believe that others could harm or save me? Why did I still hold a woman as if she were an unopened letter whose contents would seal my fate? What lies we tell ourselves, to spare ourselves our secret sorrows! Abandoned once, we abandon ourselves again and again.

I looked around at the wet flowers, the weeping blossoms. What a beautiful morning, yet how untouched by beauty I felt. What do I ever see, I thought bitterly, but the images I create — distorted images, flickering images, cast in an unholy light.

I pictured myself in a darkened theater, watching a movie I’d written and directed, and seen countless times. The projector whirred away, throwing images on the screen. The projector, of course, was my judging mind; the lens that distorted everything, my unacknowledged pain. Small wonder that everyone I saw — my wife, my friends, my children — was an illusion. There I was, too, a bad actor with lousy lines.

I kept running. My breathing deepened as I settled into a steadier pace. I knew I had a choice: to suffer the images or to face the pain. To stop projecting our woundedness onto others is difficult but freeing: the kind of freedom Lennon sang about; the freedom of being open and vulnerable, of remembering there’s no protection — and none needed — against life.

To experience others this way, I thought, to stop projecting, to step into the light from that dark and gloomy place — how exalted! What grace! It was an amazing thought, not because it had never occurred to me, but because this time something in me rose to greet it. Mercy’s wing had swept me up. I felt lighter; gravity was suspended. The world hummed with a different possibility. Joy traveled through me like a wave. Was it the endorphins — a runner’s high — or some divine benevolence, and who’s to say they’re not the same? I picked up the pace, heart and mind joined in a rare unity, as I cut across the street.

If my eye hadn’t been fixed on glory, I might have noticed the light. But I didn’t. I didn’t even see the car until I heard the frantic horn and the squealing brakes — and by then it was too late. I caught a glimpse of the car just before it hit me. There was no time to think; terror bloomed in me, a primal Oh no that never escaped my lips. My mind was unable to make the leap my body did, as I bounced off the hood and was sent sprawling to the street.

I hit the pavement. Time rushed back in, like the soul to the body after a dream. Terror gave way to wonder as I realized, incredulously, I was unharmed. I’d had the wind knocked out of me, and I was bruised. But there were no broken bones, no blood, no real injuries.

The driver jumped out, his face as ashen as mine probably was, his voice tremulous. “Are you OK?” “Yes,” I said, getting up unsteadily. “Yes. I think I’m fine.” A policeman hurried over. He looked me up and down. “Do you need to go to the hospital?” he asked. I assured him I was all right.

The driver said he hadn’t seen me until I was in front of him. Fortunately, he said, he was slowing down to make a turn; obviously, I didn’t see him, or the light. I was sorry, I said. I wanted him to know I didn’t blame him. Actually, I felt a surprising tenderness toward him, our lives for this moment oddly entwined. I reached out to touch his arm. “This is a lucky day for both of us,’’ I suggested. He nodded grimly. “I’m just glad,” he said, “that you’re alive.” 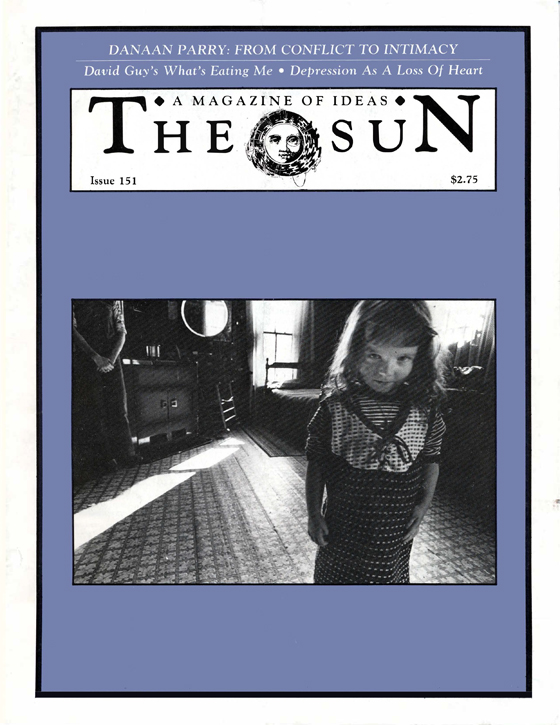 Depression As A Loss Of Heart