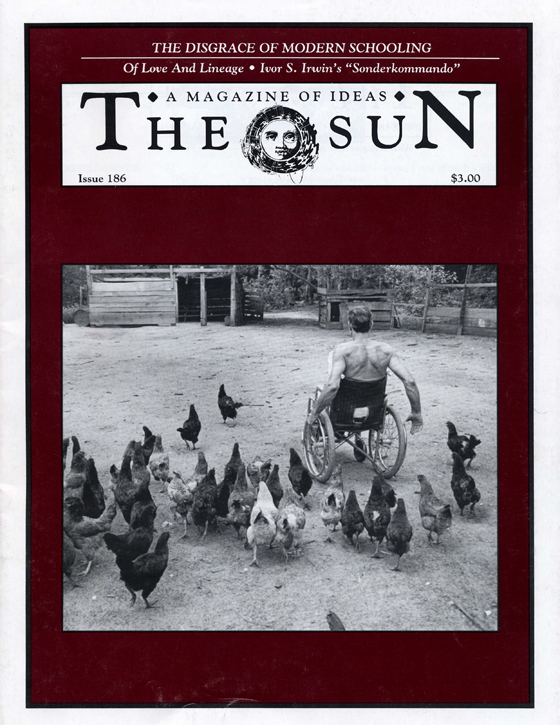 A waxed floor, a box of chocolates, a first bra

How many times have you tried to shield yourself by reading the newspaper, watching television, or just spacing out? That is the $64,000 question: how much have you connected with yourself at all in your whole life?

A Few Lessons They Won’t Forget

The Disgrace Of Modern Schooling

While teaching means different things in different places, seven lessons are universally taught from Harlem to Hollywood Hills. They constitute a national curriculum you pay for in more ways than you can imagine, so you might as well know what it is. I intend no irony here. These are the things I teach, these are the things you pay me to teach.

Of Lineage And Love

When he was old, I tried to introduce him to the Buddhist doctrine of emptiness; I thought it would ease any anxiety he might be having about the imminence of death. “Ultimately,” I began, “you never were.” “Maybe not,” he said, peering over the rim of his glasses, “but I made a hell of a splash where I should have been.”

Having once lived for a year in a van, I knew what the real luxuries were: a bed to sleep on, a light to read by, a roof to keep me dry. I liked beautiful things, but I understood the difference between living elegantly and living expensively.

The Hardest Of Hands

I see her push away the dinner plate slowly, with the same painstaking attention she uses to hide the letters from her father. She zealously guards his reputation; if I threaten it, she throws a rope around my neck and pulls.

It Is Summer And I Paint My Toenails Magenta

It is summer. I sit on the balcony and paint my toenails magenta. Last year, I painted them cerise, Peter’s favorite color. The year before, my toes bloomed baby pink in honor of Angela, my daughter.

“The Holocaust is boring, honey. I lost it with that last Louis Malle film. It’s as old as platform shoes. They trivialize it.” Carla isn’t Jewish. “You oppress yourself, honey.” I nodded.

Beating Off In Mexico