During the Watergate summer of 1973, while Sam Ervin roasted Nixon administration witnesses, I worked as a roofer on a housing development in New Mexico. The days had an amazing sameness. The one-hundred-degree-plus weather held for weeks on end. Though there were six different floor plans for the housing units we were building, there were only two roof styles — one with a skylight and one without. The shingles were either light or dark brown. Each roof took two days to lay. Every measurement, every vent, and each piece of metal flashing was the same for the roof before and the roof that followed. The gravel-coated asphalt shingles were more arid and featureless than the surrounding desert. Every day a certain cloud formed over the same peak of the San Juan range. When it grew to the right size, I checked my pocket watch to confirm what the cloud had already told me: it was lunch time.

In the relative coolness beneath the roof, we ate our meal with the assembled hard-timers, hippies, Chicanos, and Indians who made up the construction crews, and listened as the contractors argued. There were frequent disputes, sparked by trade chauvinism, conflicting schedules, and methedrine.

One day the head electrician and the framing foreman got into it. The electrician pulled out the blueprints for the house and pointed from the plans to the wall and back again, saying, “See? It calls for a doubled stud right here. How the hell can I hang a box here unless you double it up?”

The carpenter was nonplused. “This place was screwed up from the get. The foundation’s off. The slab’s wrong. Face it. It wasn’t built to the plan. It was built to the hill. You’ve got to make allowances.”

Despite the fact that the carpenter really should have doubled up that stud, I remember feeling that there was something important about the exchange without understanding its significance. Like a Sufi story, the carpenter’s complaint came back to me over the years, always ringing true, but only slowly revealing its implications.

It was an instance of that ancient conflict between what is and what ought to be, between the vision and the reality, between mind and matter, with mind stubbornly insisting that its expectations be met and reality even more obstinately refusing to be something it isn’t. “Wish in one hand and shit in the other — see which one fills up first,” goes the proverb.

We were, as craftsmen, caught up in a no-win situation. Someone, or a group of somebodies, somewhere, had created a plan for a housing tract, a vision set forth on paper, as clean and abstract as a problem in geometry. Every detail had been considered beforehand. It simply remained for us to follow the blue lines on white paper.

And yet, that paper village could never stand on this earth. Nature — both human nature and Mother Nature — insured that. Stubborn reality refused to conform to the unreal designs of the mind. Each piece of the plan, when put into execution, asserted its individuality against the mind that treated it as another undifferentiated, interchangeable part. No two houses could really be the same. No two nails, of the thousands we pounded, were identical; no two boards or shingles or grains of sand in the concrete were truly the same as any other that ever was or would be. A common, everyday miracle prevented, once again, the drabness of human thought from reproducing itself.

It’s amazing to me how little respect most people seem to have for reality. The mind is capable of tricking us into accepting its version of what takes place around us. We repeatedly mistake our perceptions for the stuff of existence, even when we know better. Like a kitten trying to touch its image in a mirror, we reach out to the world we think we see, only to find that it’s not there.

Many are terrified of the notion that reality is, by its nature, incomprehensible. A very few are delighted by it. Most, it seems, never take up the question at all.

In the spring of 1980, I was finishing up my fifth winter as a tree planter in southern Oregon. Over those five seasons I’d planted 150,000 seedling trees, enough to replant close to three hundred acres of logged-off mountain slopes. At ten planters to a crew, I must have helped reforest about three thousand acres, all within an eighty-mile radius of my home.

One morning we were planting some freshly clear-cut land up Buck Creek, a three-hundred-acre rocky, ravaged reforestation unit. Our crew was attempting to plant Douglas fir seedlings with ten-inch roots in a perfect grid pattern in shallow, eroded soil and logging debris.

Over and over again, we bent our backs and swung our hoedags, only to clink against rock covered with three or four inches of topsoil. We did what we could for the land, finding small pockets of soil that had collected against the huge, sap-oozing stumps of the forest that used to be, and scratching holes in the shallow spots as proof that we’d been there and found the spot unplantable.

“Shit!” someone spit after yet another arm-jarring clink. “I feel like a goddamned chicken scratchin’ around out here.”

It was spring, a beautiful, sweet-smelling, sunny day, and a sort of madness, compounded by ten wiry bodies in motion, sunshine, and the frustration of the work, overcame us. We glanced over our shoulders slyly, challenging Bill, the foreman, to stop our clucking insurrection. Bill surveyed the scene from his stump-top roost, leaning against his inspector’s shovel. He lifted his hard hat, scratched his head, and as was his wont, spoke of the wonders of modern forestry.

“Boy, they sure did a nice job on this unit.” He gestured toward some scraggly residual trees. “Those naturals will really take off now that we let the sunlight in. In the old days we wouldn’t have bothered, you know. Hell, ten years from now this’ll all be thick as dog hair with young firs.”

“Fuck-fuck-fuck-fuck-off!” someone down the line called out amid the clucking and clinking. Bill pretended he hadn’t heard.

I thought of the hardscrabble canyons of Rock Creek, of the old units logged twenty and thirty years ago that we’d replanted all winter long, trying for the fifth or sixth time to bring back the forest on land whose soil had been muddying the river for decades. Something sad and ugly rose within me. I stood up, leaned on my hoedag to straighten my sore back, hitched up my tree bags to ease the chafing on my hips, and turned to face my foreman.

“You’re nuts.” I told him. I gestured downstream at the silted creek bed, at the place where we’d found chips of jasper knapped from tool cores by the Indians, at the stark, gray face of Buck Rock gleaming in the sunlight for the first time in ten thousand years, at the yarder tower roaring its diesel roar and hooting like an owl as it dragged a turn of logs uphill to the waiting log trucks.

“Look at this place, Bill. This ain’t a forest — it’s a disaster. Get your head out of your ass and look at it. A hundred years from now people will wonder how the hell we could have been so fucking stupid.”

It was time to back off, I knew. It was one thing to bait the man as a joke, but challenging his profession was stepping over the line. Yet the accumulated frustration of five winters of tree-planting had turned to venom.

“Bullshit. You’re crazy. All you company foresters are insane. Just look at this place, Bill. Take a look around you and see what’s really going on here.”

“Look, Heilman, don’t fuck with me. I run a good crew and we do good work. What do you know anyway? I’ve got a master’s degree in forestry — I know what I’m talking about. You don’t know shit,” he said, as if mountains were blackboards.

I’d blown my next winter’s job, his tone said. I thought of the coming November, and the uncertainty of finding another crew to work on. I glanced at the last seedling I’d planted, chose a likely spot eight feet away for the next one, took two steps, and swung my hoedag. Up and down the line the laughter and clucking had died and the only sounds were the scraping and clinking of hoedags and the distant roar of the yarder.

Bill wasn’t a bad guy to work for at all. In fact, I liked him and respected him. It’s not easy to ride herd on a bunch of mud-spattered brush apes and he did it well. But like a lot of nice people, he’d bought into a plan, some words on paper which he never questioned despite the evidence all around him. In his view, the plan itself was foolproof. If anything went wrong, it had to be because the plan hadn’t been executed properly. It never occurred to him that no plan, no matter how detailed, could ever encompass something as complex and miraculous as a mountain slope.

The illusion of sameness devalues the currency of language, thought, and emotions. We forget that the word only stands for the thing suggested. The object is an unknowable and sacred mystery — simply by being.

Uniformity is a convenient fiction, useful for fooling ourselves but useless for seeing things as they really are. Never trust those who believe in the reality of units. The lack of respect for the fact of individuality makes all sorts of horrors not only possible but seemingly desirable. If the universe is composed of interchangeable pieces, the annihilation or impoverishment or debasement of any one piece — whether a rock or a mountain, a tree or a forest, a person or a people, a valley or a planet — cannot have much importance. 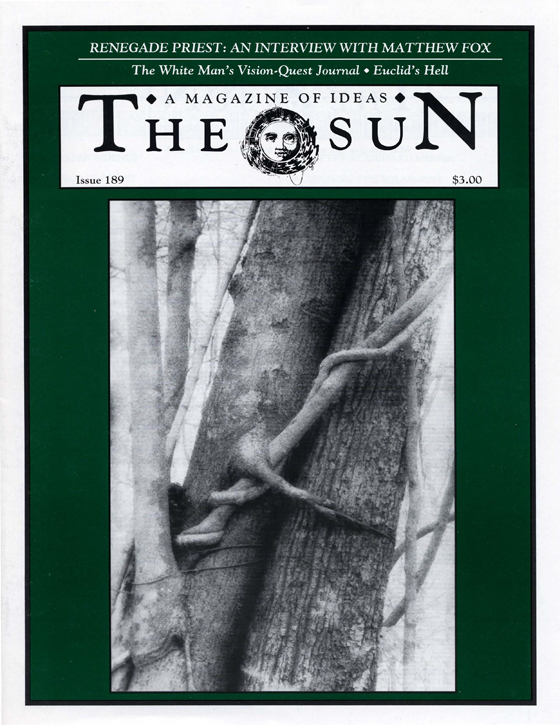 By Gloria Dyc
The Sun Interview

An Interview With Matthew Fox