I did not go to the Maggid of Mezeritch to learn Torah from him, but to watch him tie his boot laces.

Strangely enough, the profound and the transcendental are to be found in the factory. It may not fill you with bliss to look at it, it may not sound as good as the spiritual experiences that we have read about, but somehow reality is to be found there, in the way in which we relate to everyday problems.

Rabbi Moshe Leib of Sassov said: How to love men is something I learned from a peasant. He was sitting in an inn along with other peasants, drinking. For a long time he was silent as all the rest, but when he was moved by the wine, he asked one of the men seated beside him: “Tell me, do you love me or don’t you love me?” The other replied: “I love you very much.” But the first peasant replied: “You say that you love me, but you do not know what I need. If you really loved me you would know.” The other had not a word to say to this, and the peasant who had put the question fell silent again. But I understood. To know the needs of men and to bear the burden of their sorrow — that is the true love of men.

If you wonder whether certain behavior constitutes infidelity, I recommend that you ask your spouse.

Forgive us . . . for pasting stained glass on our eyes and our ears to shut out the cry of the hungry and the hurt of the world.

If the building of the bridge does not enrich the awareness of those who work on it, then the bridge ought not to be built.

A man was attacked and left bleeding in a ditch. Two sociologists passed by and one said to the other, “We must find the one who did this — he needs help.”

The greatest crimes are caused by surfeit, not by want. Men do not become tyrants so as not to suffer cold.

The law, in its majestic equality, forbids rich and poor alike to sleep under bridges, beg in the streets, or steal bread.

The law is simply expediency wearing a long white dress.

It may be true that the law cannot make a man love me, but it can keep him from lynching me, and I think that’s pretty important.

That is what is so bizarre about the American legal system. Where else on earth would stealing from a phone booth be considered more serious than polluting the earth?

May you have a lawsuit in which you know you are in the right.

There seems to be a kind of order in the universe, in the movement of the stars and the turning of the earth and the changing of the seasons, and even in the cycle of human life. But human life itself is almost pure chaos. Everyone takes his stance, asserts his own rights and feelings, mistaking the motives of others, and his own.

A spiritual truth, an object of our faith, which doesn’t hold up in a prison cell or during an earthquake isn’t a big enough truth.

The little things? The little moments? They aren’t little. 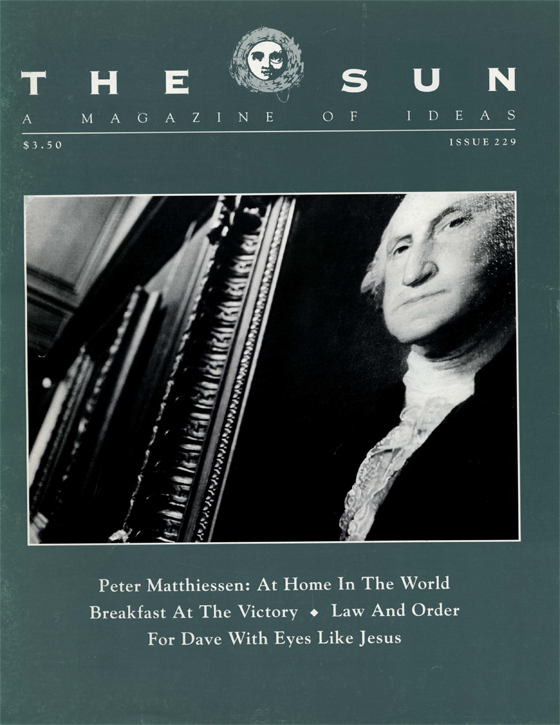 Breakfast At The Victory

At Home In The World

An Interview With Peter Matthiessen