The man she loves might become a monk. He is up at an Ivy League divinity school studying Saint Benedict and looking forward to spending a week of his winter vacation at a monastery. She was hoping they could go to LA, but that was before he dumped her.

He used to call and tell her how he pictured her while he masturbated, which seemed to be his daily practice, along with chapel. She can’t imagine what his fantasies consist of these days — receiving the stigmata? Or has his sexual desire evaporated? “You’ve changed completely,” she tells him when they speak now. “The pendulum has swung all the way in the opposite direction.”

“From perversion?” he asks.

Their phone calls have been uncomfortable since a couple of weeks before the breakup. Each time, she feels she has betrayed herself. Once, she let him seduce her into phone sex, and she came moaning heavily into the plastic receiver. Later, she called him back crying. “I feel objectified and fragmented,” she said, “like a collection of stray erogenous zones.” He promised to come see her the next weekend. They would make love in person.

That week, she colored her roots and waxed her legs, but on Thursday he changed his mind. “I just can’t be with anyone now,” he explained. It was unnerving to be rejected after a bad reaction to phone sex. She’d always been a good fuck.

Now she is an emotional loose cannon. At first, she is cheerful, loving, and friendly. The next time they speak, she is touchy, tragic, and overly sentimental. She wishes she could behave normally, but can’t begin to imagine what “normal” is in this situation. All she knows is that she wants him in her life somehow, even if he is, for the moment, a monk.

He tells her about an upcoming Byzantine service at his school. He’s been chosen to read the part of Emperor Justinian. She envies the students who will see him perform with his angelic golden hair pulled back from his brow. The morning of the service, she dreams of Justinian’s wife and sees Empress Theodora’s huge eyes staring at her from a glittering mosaic. She wakes up at 5 A.M., screaming, “I want to be Theodora!”

She isn’t the kind of person who dreams about snakes and water holes. If she needs to dream about giving her father a blow job, she goes right ahead and dreams it.

Hoping to drown her sorrows in an affair, she goes to Central Park with a handsome California poet. He presses her against the wall of a dry fountain and kisses her passionately. A small groan rises from his throat, and he says, “I want to make love to you,” as if he’s rehearsed the words in front of his mirror. She looks up at him and asks, “Why?”

In November she calls the man she loves. She starts out chatty, then slowly crumbles. “You’re not ever coming back, are you?” she asks. “No,” he answers. She can feel him beginning to despise her. She hangs up and promises herself not to call him again.

Theirs is the dumbest story ever. She fell in love with him in July; they made love all through August; in September they phoned, wrote, and visited; and in October he said it was over. She reminds herself that he never guaranteed her anything. He didn’t betray her, and he has always been well-mannered with her, even after the breakup.

When she tells her chiropractor why her neck is knotted, he says, “The guy sounds like a real jerk.”

In the shower she breaks down as warm water runs over her naked body. She wraps her arms around her chest and cries with crème rinse in her hair. At lunch time, she sobs in the arms of her best friend. “You are doing deep, deep work,” her friend tells her. “You are letting go of all ego, all defenses. You are sitting with your sorrow, allowing the sadness to move through you like slow water. You are letting your heart open and break, and that is the challenge for all of us: to live in this world with our open, broken hearts and continue to love. That is the only way there will ever be peace.” She finds this a bit of a stretch; still, it consoles her to imagine that she is contributing to world peace.

There is nothing for her to think about when she cries. Sometimes she sees his face in her mind; sometimes she doesn’t. By the new year, there is no more anger and no blame. There aren’t any issues to discuss, just sadness. Really, there isn’t even a story. 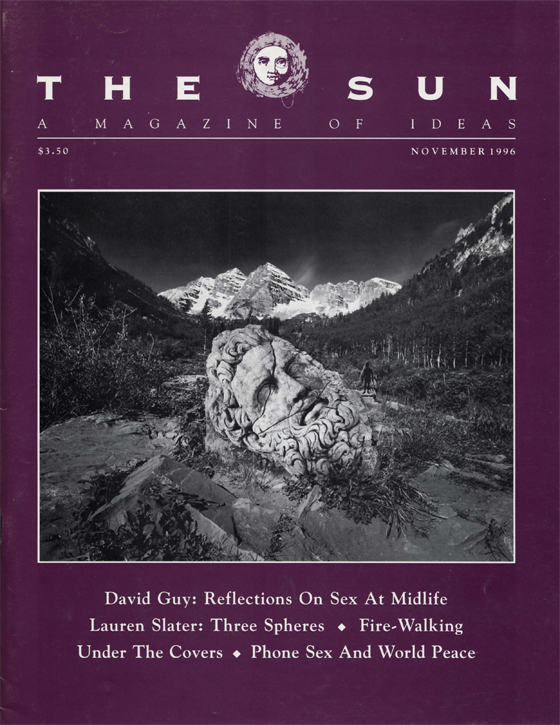