Shortly before her stroke, she broke up with a lover younger than my brother and I. That was Mom. Born at home in Brooklyn during the Depression, she did group therapy with murderers by day, and by night maintained a small private psychiatric practice. Even now, her drawers are filled with letters from grateful clients. She was once the international president of Parents without Partners. Years later, she helped found a local chapter of Parents and Friends of Lesbians and Gays — in, of all places, Orange County, California, where Mickey Mouse is king and it is always 1957. Now, at age seventy-one, Mom lies in bed, needing to be dressed and changed and fed.

Seventy-one. “She’ll be the youngest person here,” my brother and I were told at every nursing home we checked out. Six years ago, she had a major stroke, and overnight went from being a sexy, tan woman with dark, curly hair to an invalid learning to walk and talk again.

I’ve been through this with friends who had AIDS. And when Dad was dying, I washed and changed him. But I don’t want to do that with Mom. When she was stronger, I helped her wash and dress herself. Once, I gave her a bath, her first after months in rehab. I lit incense and candles to create a soothing atmosphere, but no one told me not to use bath oil when bathing a semiparalyzed person. I finally got her out, slipping and sliding, the two of us laughing. I could do that. But change her diaper — no.

My brother and I hired a succession of women to do the work we didn’t feel cut out to do, and these total strangers suddenly became part of our family. Still, as grateful as we were to them, their incessant tenderness and sweetness were grating. Their saintliness reminded me of Mom. She did the best she could as a single mother, but she could have done better if she hadn’t been so busy taking care of everyone else.

I feed her some soup — chicken soup, like she wants. It’s ironic, a longtime vegetarian cutting up and cooking a bird and feeding it to his mother, who declares it too fatty. (I cut off as much fat as I could, scrubbing my hands three times afterward, once with bleach.)

Now she sits in her wheelchair. We’ve given her attendant the afternoon off. Five minutes after the woman leaves, Mom wets herself. The stain spreads down her pants leg. She insists she doesn’t want to be changed, but I can’t let her sit there all wet, so my brother and I move her to the bed. She doesn’t want us to change her, but we have to, or else it’s time for the nursing home.

It isn’t easy diapering a 150-pound baby, especially if it’s your mother. At first, we put the diaper on inside out and have to do it all over again. My brother is up near her head, and I am standing by her feet. Her legs are spread on the bed, and I think, I’m not supposed to be looking at this. And yet I realize, This is where I came from. So I look.

The once tan skin of her legs is now mottled with bruises from needles and bloated from steroids. Yet there, between them, up inside my mother’s body, the exposed flesh is moist, fresh, contained, and I think, She looks like she’s still sixteen.

The February 1997 issue saddened me. I kept reading and reading, finishing each piece on the verge of tears, hoping to find, before bed, an article that would turn the tide of sorrows. It didn’t happen. The later into the night I read, the more the melancholy built, and my chances of going to bed with dry eyes were lost in “Mom,” “If I Were God,” and Sunbeams. Thanks.

Mark James Taos, New Mexico
More Letters
Thank You Your donations helped to keep our ad-free, nonprofit magazine in circulation last year, funding everything from production to distribution. Learn how you made a difference last year. Learn More 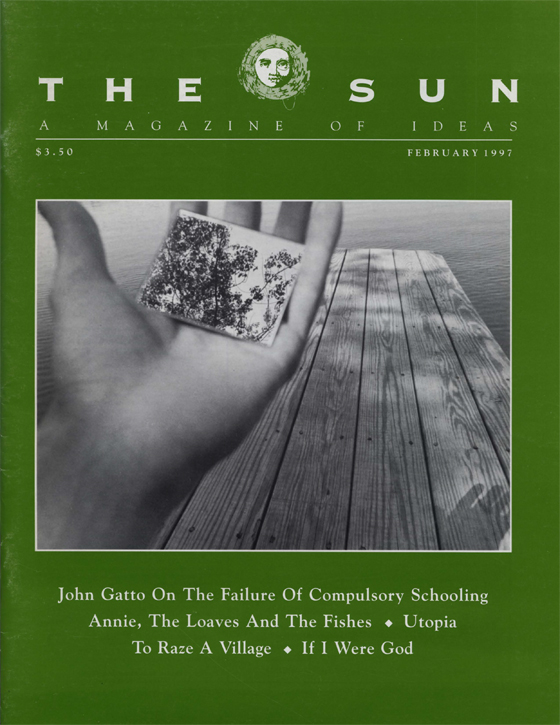 Annie, The Loaves And The Fishes