I don’t want to dream my life away. It’s too easy to sleepwalk through one miracle after another. Is this the dawn of creation — or just another Wednesday? Am I searching for something true and enduring — or asking too little of myself in too loud a voice?

In the Dhammapada, it’s written: “Better than a hundred years lived in ignorance, without contemplation, is one single day lived in wisdom and in deep concentration.”

I have moments of awareness. They’re few and far between, but the hungry man in me is fed. How grateful he is. Look at his face as he lifts the soup spoon with a trembling hand. This is what I wanted, his expression says. This is all I ever wanted. Then his wife laughs at another man’s joke, and the soup spoon clatters to the floor, and the soup is forgotten.

Slave to desire, only who is the master here? He doesn’t look free to me.

Suffering insists on being taken seriously. When he shows up at the front door and says he wants a word with me, I can’t just slam it in his face. What would it mean to live with the knowledge that everything will go wrong sooner or later, that suffering will show up no matter what I do? What would it be like to live with the door open?

At the wake, Norma’s grandfather was laid out as if sleeping peacefully, but only the living sleep. We who were still alive cried, joked, and breathed the same air — too intimate an act to refer to in polite company, and before the dead we’re especially polite. But there we were, breathing in and breathing out, arriving at the funeral home and then leaving, a great human tide washing over this ninety-one-year-old man who fathered six children, who outlived his wife by twenty years, who never remarried. He lived alone right up to the end, never wanting to be a burden to any of his children or grandchildren, or to spend even one night in a nursing home. One day he fell and broke his hip; the next day, in the hospital, his heart gave out. The doctors called the cause of death a heart attack, having no better way to describe what happens when a man falls and doesn’t get up.

Yes, it’s true: no matter how much I get accomplished, I’m going to die someday. Death already has my name jotted down in his Daytimer, and always checks off everything on his list. Death, don’t I want to be more like you: just doing the work I was put here to do?

I can’t blame the deadlines, or the e-mail, or the ringing phone. They’re not the reason I forget to pause, to breathe deeply, to remember who I am. I always have a choice: to stay grounded or to let myself be seduced. Busyness wraps her arms around my neck, tells me what a great guy I am, asks if I’d mind helping her with a few things. Oh, that perfume!

My long, beautiful lists are more beautiful than I’ll ever be.

M. is disappointed that I don’t celebrate life with as much ardor as I bring to my laments. He’s right. It’s hard for me to write about feeling happy. Either I just don’t have the vocabulary for it, or I’m afraid of sounding sentimental. Yet how wonderful it would be if I could find the words. I started The Sun with just fifty dollars. I weighed only nine pounds when I was born. Perhaps my ability to write with joy will also grow.

Why do I imagine that my sentences need to be better dressed than I am? If I’m not the kind of writer I’d like to be, let me start with that. Let me start with my rumpled clothes, with the overcast sky, with how inadequate I feel to the task at hand. But, please, no more self-improvement schemes. The man I am is the man I am. As Paul Simon sings, “When they tell you you’re not good enough, well, the answer is you’re not.”

One way to love myself is to stand still when sadness comes sweeping in like a storm. This means not judging the storm, and not condemning myself for getting drenched; three-quarters of the world is covered in water.

Happy Birthday, Dad. It’s been so many years since I’ve felt your hand on my shoulder. Maybe it’s been there all along, guiding me. Here, among the living, we speculate endlessly about such things. Our pictures have all the subtlety of a paint-by-numbers kit, but that’s the best we can do. Is there anything you want to tell me about the city of the dead? Are you wiser now? Are you happier? Do you still get together with your friends on Friday nights to play pinochle, or did you leave all that behind, like your job, your wife, your daughter, your son? I’ll leave it all behind, too, won’t I? Everything that’s so important to me now, everything I can’t imagine living without. Just as, once, I couldn’t imagine living without you. 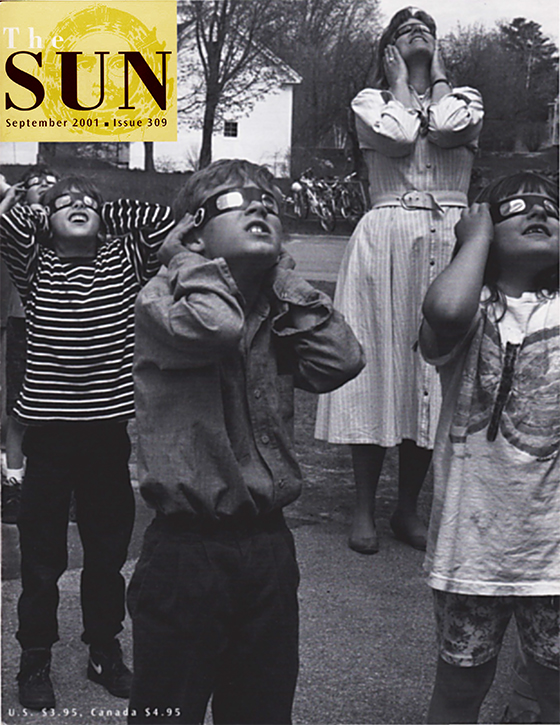