Every morning, I weigh myself. Which God am I worshiping when I get on the scale? Sure, the body is a temple. But is 160 a more holy number than 170? It would seem so, from the way I worship. If there’s more of me today, will God love me less?

As I exercise, I listen to the news: another story about global warming. I’m sweating; the world is sweating. Are we all strong enough to change what needs to be changed? I finish my push-ups. I wonder how many more I could do if someone put a gun to my head. Convince me my life depends on it, and suddenly I’m a little stronger.

I dreamt that a gang of evil men with superhuman powers had kidnapped my daughters. I ran for help, but no one believed me; they looked at me as if I were crazy. Then I started thinking, Maybe I really am crazy. I woke up feeling shaken. I realized that this is what so often happens when we come face to face with some unimaginable horror: we run for help, but no one believes us. No one believes how many species are disappearing, how many prisoners are being tortured, how many women are being broken by self-important men. Everything stops making sense. The weight of the world sits on our bony shoulders, and our bones snap.

Even on this dying world, I’m thankful to be alive. Even in the richest and dumbest nation on earth. Even as the planet grows warmer, and my president plays with matches. Even though my words are too little, too late.

What a funeral I’ve planned for the old habit. I’ll wear a pinstriped suit and a polka-dot tie. I’ll dance on the grave and raise my glass high. If only the habit would die!

I can’t seem to get started on another essay. I don’t want to endure false start after false start, the frustration and impatience and blistering self-criticism. I wonder, once again, if I’m a real writer. But isn’t this like wondering if I’m a real man? Writing is difficult for me. I judge myself harshly for that. Then I judge myself for judging myself. Can I simply acknowledge that I write, which makes me a writer; that I breathe, which makes me a man?

Inspiration finally shows up, without a word of apology. (But God forbid if I’m not here on time.) She unbuttons her blouse, slips off her skirt. It’s been so long, I stammer. What if I do something stupid? She laughs. Of course you’ll do something stupid.

Once again, I didn’t sleep well. The room was too cold. My wife was too warm and the room was too cold. At forty-six, Norma is entering a phase of life that’s almost as difficult for me as it is for her. She’s having hot flashes, which means she insists on blasting the air conditioner all night, so every morning I wake up freezing. I wonder if I should sleep downstairs on the sofa. I wonder if I should go to a motel. But I won’t leave Norma’s side, even though there are icicles in my beard. I won’t desert my wife, even though she’s single-handedly bringing on another ice age in North America. There’s a huge white bear pawing at our window. Because I love my wife, I will kill the bear. I will wear its fur. I will be called He Who Killed the Bear for the Love of a Perimenopausal Woman.

If I want to penetrate the illusion of separateness, does it really matter whether I’m laughing or crying as I part the veil? What matters is parting the veil. Last night, I cried, but they were tears of joy. I thought of all the people I love with a love so much bigger than me that it hurt. Maybe love is like that: always expanding. Maybe that’s why the universe is expanding.

I’m staying up late tonight, reading Rumi and drinking wine. Rumi is telling me not to be an idiot who imagines he has all the time in the world. Rumi is telling me there are hundreds of ways to praise God; what’s important is to kneel and kiss the ground now. Rumi is here with me tonight, and he won’t stop talking. Probably, I should brush my teeth, go to bed. I should be like the president, who gets a full night’s sleep no matter what. But Rumi is pouring me another glass of wine. Rumi doesn’t care if I’m refreshed in the morning. Rumi keeps talking, and I keep listening, because somewhere a man my age is dying tonight, a man who was fit and healthy until six months ago, who rolled the word forever on his tongue like a grape his wife had peeled for him, as they lay naked beside each other, the night still young.

The other day, when I first read Sy Safransky’s October “Notebook,” I thought how I’d like to strangle him. He so perfectly mirrored my own struggle, my own proud stupidity. I can see that he would rather describe the struggle (which he does so beautifully) than sing and dance in victory over it. I know because I am the same way.

With the route to enlightenment mapped out neatly and clearly by a dozen wise prophets in a dozen articulate ways, Safransky chooses to continue struggling. I can come to only one reasonable conclusion: he writes so well that it must be God’s will for him to share the gift of expressing the struggle. God doesn’t want him to get through the door to heaven, even though he knows how to open it. No, God wants him to writhe outside and in full view of paradise and continue to describe the doorway and the pretty glass and the shining faces in the windows for others who are on their way.

Perhaps this is the point of most of the writing in The Sun: that it describes and embraces the journey — that most urgent and significant journey that we are all, consciously or unconsciously, embarked upon; that journey home, past the illusion of our devastating separateness. 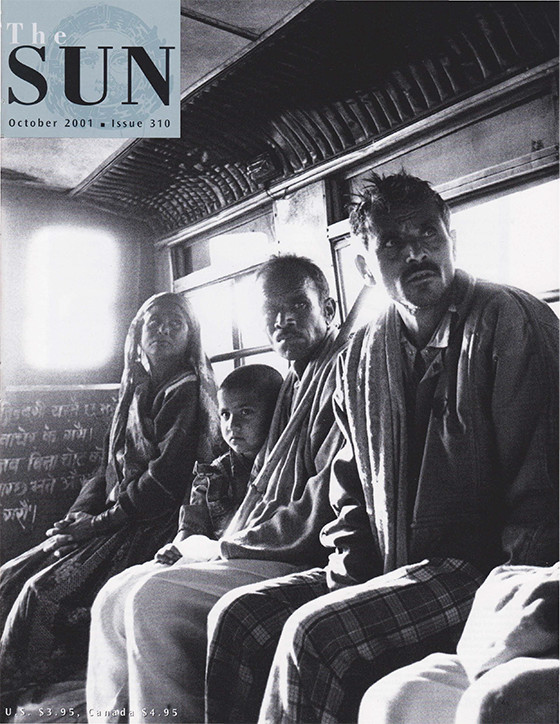 The Man Who Found You In The Woods