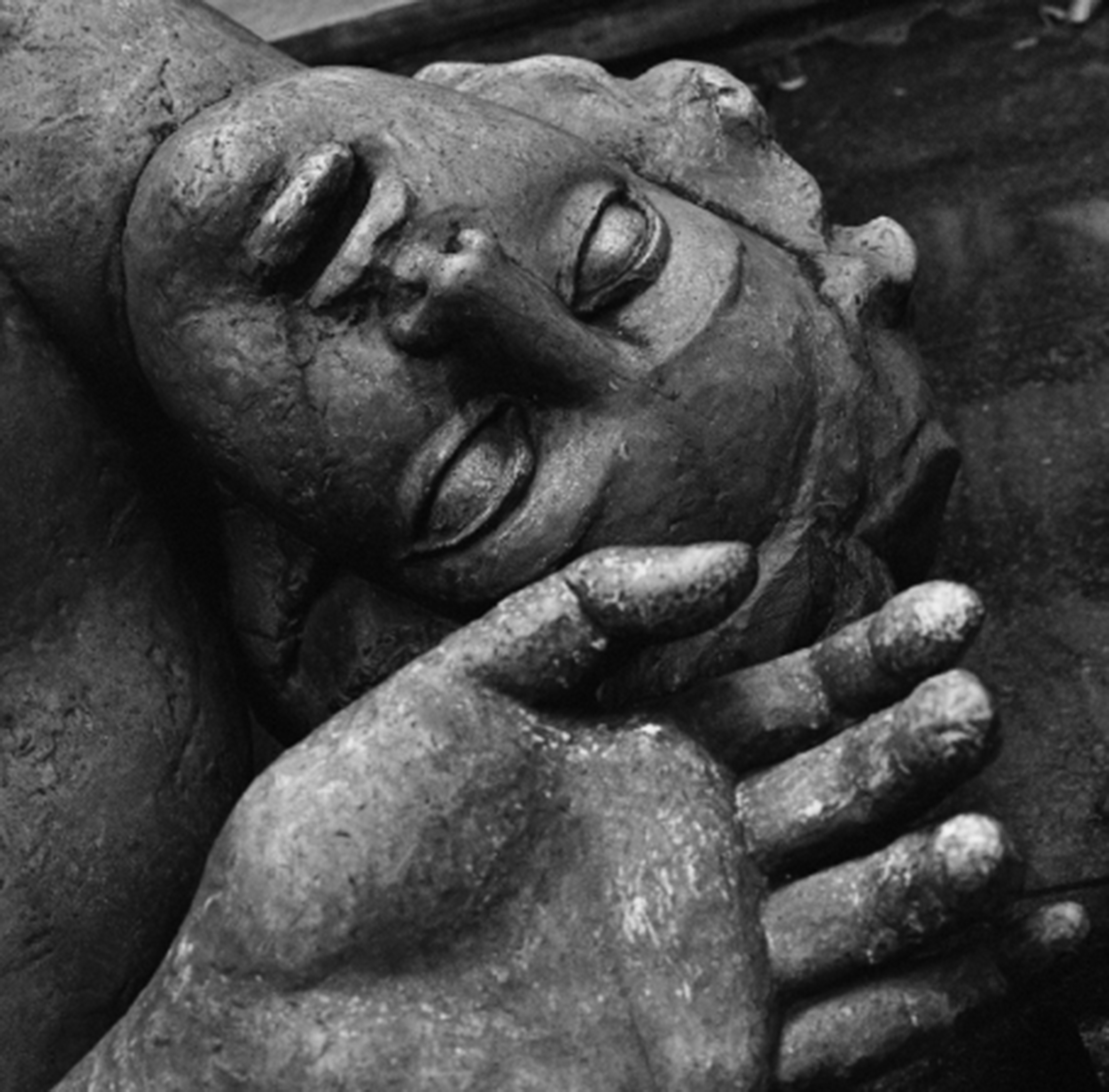 Jean Jones is immense, approaching freight-scale proportions. It was I who, meanly, nicknamed her Jabba the Hut, after the amorphous alien in the Star Wars series. The other nurses laughed, and the name stuck. It is not used, of course, within her earshot.

Cruel jokes aside, I like Jean Jones. I am often assigned to her when she comes in: she’s admitted to the psychiatric unit two or three times a year.

Last week, as I took off my coat, I saw her name on the census board at the nurses’ station. Discreetly, I murmured to Elaine, another nurse, “Jean’s back?”

Whenever Jean is admitted, she spends the first few days supine in her room, draped in the tackiest of mumus. Cerise, chartreuse, cobalt, magenta — these are the hues she picks to cover her massive frame. And the material is always some slithery, shiny five-and-dime fabric: orlon, rayon, dacron. She lies in her darkened room weeping and reeking of urine (she has a stress-incontinence problem), her right foot tapping like a metronome. (She also has Parkinson’s disease.) Sometimes it’s her right hand that moves, rasping rhythmically against the sheet, or hand and foot together, so that the pauses in our conversations at the station aren’t quite silent.

I learned Jean’s latest story from her admission report: She didn’t like her job as a live-in nurse for a rich old woman. One of her sons was seriously ill. The Department of Motor Vehicles was threatening to revoke her license. She said she couldn’t take it anymore. Since being admitted the day before, she’d refused pills, food, and water. She wouldn’t leave her bed except to pee.

For the first part of my shift, I left her alone, only stopping to peek in every hour or so. But then came eight o’clock: time to administer medications.

“I don’t need them,” she muttered, her back to me, her voice muffled by the pillow.

I had the option of writing, “Patient refused,” on the med sheet, but I like to make an effort. And, besides, I knew Jean could be coaxed.

I stared into the pill cup in my hand. “Klonopin,” I said; “Sinemet, Colace, imipramine, ibuprofen. Come on, Jean, you take these all the time.”

“I don’t need them,” she said, shifting in bed and releasing a cloud of scent. “What good are they?”

“What good are they? You know the answer, Jean. You’re a nurse.”

Jean was silent. I suppose I deserved this, having deliberately misinterpreted her question. I put the pills on the bedside table and flopped into her chair. “Jean,” I said, “it strikes me that you’re not happy.”

I crossed my knees, worked my leather flat free of the heel, and dangled it from my toes, admiring the shape of my foot in the dim light from the hall. “When you left last July, you were happy,” I said. “What’s been going on since then?”

“My son is dying, for starters. And all my daughter Betsey ever does is ask for money. My Parkinson’s is getting worse.”

“How about the old woman you work for? How is she?”

“Crazy. You never know what she’s gonna do next.”

And Jean was off and rolling. It had taken less than fifty words, spoken with a modicum of interest, to snag her. Like some massive, ornamental carp, she nosed up out of the dark bottom, toward the light.

Jean likes to talk and has a rough talent for description. She described the old woman so well that I could almost hear her walker creaking in the dark halls of her empty, fading mansion.

Jean also does voices. “Jean,” she called now in her employer’s witchy falsetto, “I have to go to the toilet! Jean, come quick! I have to do a big job. Jean, what’s that trash you’re eating? I don’t allow junk like that in my house. Jean, where are you going?” Returning her voice to normal, Jean said, “To Mars, if I’m lucky.”

I laughed. “At least your sense of humor is intact,” I said. Jean likes to be told that. It’s a point of pride with her. But I could see that it was going to take more than laughter to get her out of this one. She could watch reels of Charlie Chaplin films and still be in the same boat.

As if Jean were reading my mind, her shoulders started to shake. “Dr. Bentson’s mad at me,” she choked. “He asked me what I thought I was doing here this time.”

“I told him I wanted to die in peace.”

“But they won’t let you die here,” I said. “People don’t come to the hospital to die, unless they have terminal cancer or something.”

“If you keep refusing, they’ll put an IV in your arm and a feeding tube down your nose.”

“Ha,” Jean snorted, to let me know what she thought of their puny tubes. “If he sends me home, I’ll kill myself. I have enough medication to take out Burlington.”

She said this with such relish that we both paused for a moment to savor it. I could have pointed out that if she really wanted to die, she would have stayed home and done it. But I remained silent. I didn’t want to hurt her dignity. Jean sees herself as a tough customer: a hardworking, no-nonsense, kindhearted woman.

She writes poems. She’s showed them to me before. They are rife with misspellings but reveal a certain flair for metaphor. I remember, in particular, a poem to her father — not so much the words, but what the words revealed. Her father started fucking her when she was fourteen. “You’re a lot better at this than your mother,” he told her.

Jean got pregnant. When she confessed whose baby it was, her mother beat her up and told the authorities she was a lying slut. Then she sent Jean to an unwed mothers’ home, and the child was given up for adoption. After the home, it was reform school for Jean, and then marriage to an abusive man. Her husband was a construction worker who dragged his family from place to place in search of jobs. Jean had three more children, and adopted three. Somewhere in there — after her husband died, I think — she got her practical nurse’s license. Does she miss her husband? Ha! Fat chance. If he were hanging by the neck from that tree branch out there, she’d pull up a chair to enjoy the view.

I remember something else Jean told me about a tree. It was a very tall pine down the road from her childhood home, in a pasture. She would go there after her mother had beaten her. She would climb into the tree’s topmost branches, where she felt safe, because no one could touch her there. She imagined she was closer to God. And she saw that the world was bigger than her mother.

Jean’s brother surrendered to their mother’s beatings, but Jean fought back. She would not submit, so her mother beat her even more. One time, Jean’s mother hit her so hard that she broke Jean’s arm. Jean told the doctor she’d fallen out of her tree.

Sometimes I imagine Jean as she looks now, in a mumu, at the very tippy top of a jack pine, gently swaying in the wind. Then I feel afraid that it might break.

I knew I had to convince Jean that life — her life, in particular — was better than death, though I only half believed it myself. What was left for her, after all? She was sixty. Her health problems were worsening. She would end up in a nursing home, where the overworked aides would hate her for her weight, her shakiness.

“You’re in a tough stretch, Jean,” I began, “but no matter how bad life seems, you must have hope that things will get better.”

Jean was quiet, in listening mode. I imagined invisible antennae waving around her head.

“You’re a survivor, Jean. You know that. And it’s because you like to do things, like write poems and buy presents for your grandchildren. Remember the last time you were here? You got so excited when you found a pair of shoes you could wear. They were jogging shoes.”

Jean was crying again, silently. I could see her shoulders starting to shudder. More words were needed. Alms for the poor. I had to go deeper.

And it was hard work, because the sick aren’t easy to love. Love is a discipline like any other. Mother Teresa was an artist, and her ceaseless acts of love were her art.

I spoke to Jean of love and hope. I spoke to her of joy and goodness. I was a fountain of platitudes, some of which I hovered on the verge of believing. At the same time, though, I began to entertain the possibility of Jean’s ending her life. An image came to me of Jean at her medicine chest at home, gulping down mouthfuls of pills, or of Jean in the hospital shower, dangling by her neck from the cord of the call bell. I pushed these images away and talked on. Although a voice inside me said, Your words are crumbs, crusts, parings, another voice said, People can live on crumbs, and do.

Jean didn’t spring from her bed, a new woman. She didn’t flick on the light and dance a jig. But she did turn toward me. It was a maneuver with many stages, a huffing, creaking rearrangement of limbs. Her short, mousy hair sprouted at odd angles from her head. She reached for her eyeglasses, on the bedside table.

“Will you take your pills now?” I asked.

“Hand them over,” she said. She downed the lot and chased them with water.

“I have to give my other patients their eight o’clocks, but I’ll be in to check on you later, and talk some more.”

Jean nodded. We had a deal.

Leaving the room, I felt shivery and disoriented, like a diver coming up too fast from the ocean’s depths. I went back to the nurses’ station. Elaine smiled at me.

“I got Jabba to take her pills,” I said.

“Florence Nightingale, eat your heart out,” she replied.

“You know,” I said, “I was thinking something.” I paused for a moment, to get it right. “When we make fun of the patients, we’re like ducks on the shore, preening our feathers to waterproof them. We’d sink if we didn’t.”

Elaine laughed. “Not bad, as rationalizations go,” she said. “Quite good, actually.” She closed the Lands’ End catalog she’d been flipping through and got up. “I’d love to stay and preen with you,” she said, “but I’ve got to go float around the pond.”

I was off for a few days after that, and when I returned, Jean was out on a pass, shopping. She came back bright eyed and glowing, and showed me what she’d bought: mints for herself, sweat suits for her grandchildren, and a journal with a spray of fall leaves encased in polyurethane on the front. She had showered and smelled of eau de Kmart. I sat in her room as she bustled around, putting her things away, breathing heavily. I knew these purchases were cheap and would soon be worn out or used up. But that’s the way life is. And Jean was starting fresh again. She crackled with determination, like the cellophane on the package of mints when she opened it. I was glad when she gave me one.

What We’re Really Hungry For

An Interview With Geneen Roth On Mindful Eating