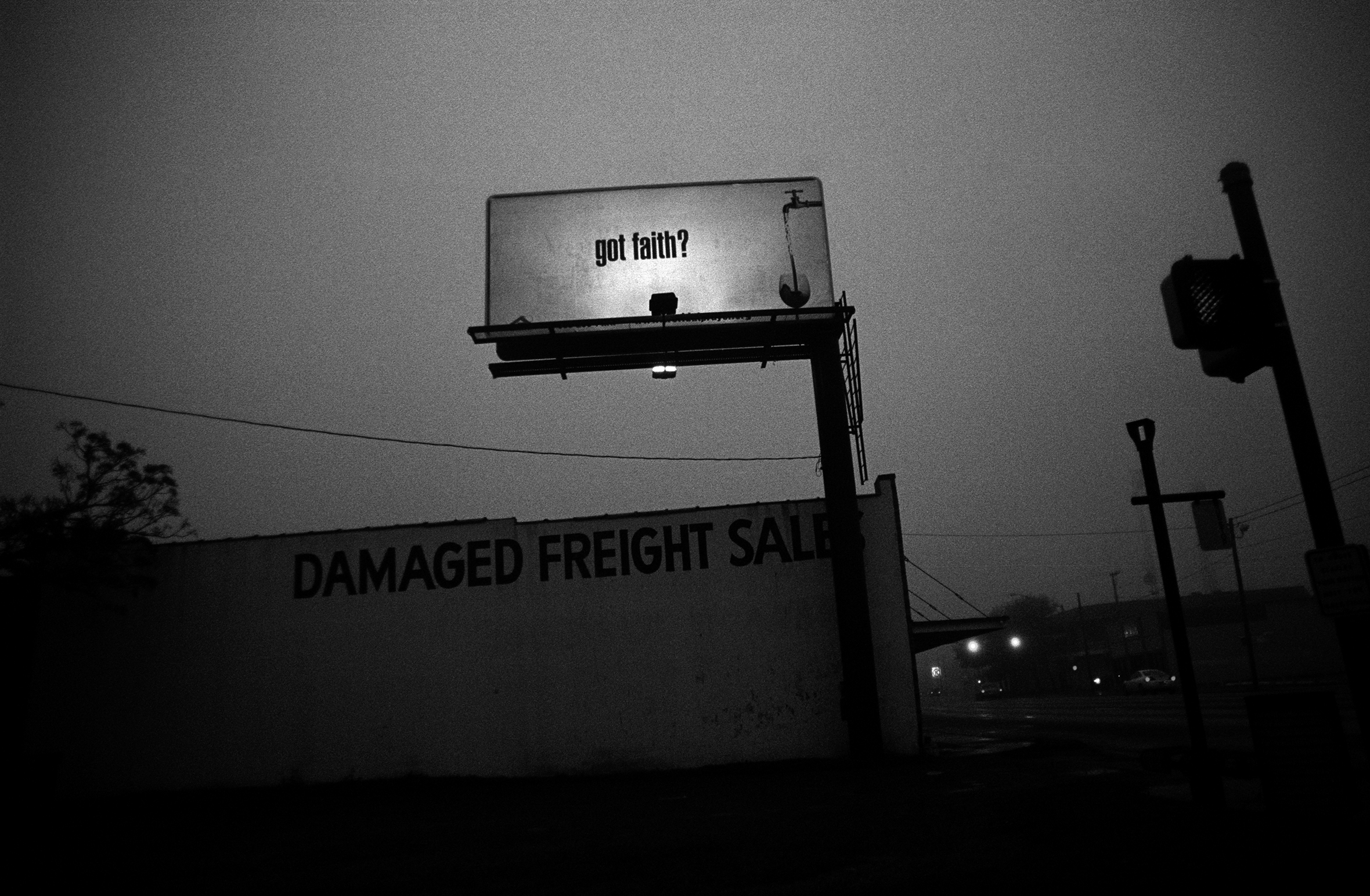 I am headed toward Florida as my country heads toward war with Iraq. Protests rage around the world, but I do not join the protesters with their “No blood for oil” signs. Every year I’ve been alive, there has been war somewhere. At the beginning of 2003 there were thirty wars being fought around the world. We fight with our families, our neighbors, the natural world — and yet we expect peace. We will not “give peace a chance,” not this year, or the next, or the one after that. As valiant as protesting war is, I’m beginning to liken it to Benjamin Franklin’s famous quote: “The definition of insanity is doing the same thing over and over and expecting different results.”

I am on my way to the Florida Gulf Coast for rest, relaxation, and shrimp — part of an annual migration of Midwesterners, college kids, and heat-seeking Canadians. Today I will drive through five states in nine hours, right through the Bible Belt. With each passing mile, I pass pin-sharp spires, trios of crosses, and gravel tracks that lead back to churches with names like Victorious, Liberty, and Primitive.

In Dyersburg, Tennessee, a knot of men and women stand at a busy intersection, holding signs that announce, “The end is coming,” “Repent,” and, “Prepare for Christ.” The women wear floral-print dresses; the men, white shirts, skinny black ties, and shiny suits. Moments ago I watched them tumble out of a Baptist-church van and take over this crossroads of fast-food joints and big-box stores. They yell at me, practicing their own form of civil disobedience.

Maybe the end is near. If so, we’ve had a good run. Who’s to say that the human race should go on forever? Doesn’t the earth deserve a rest? Why not give the cockroaches a chance to run things?

But if the end is near, then everything turns precious: all the Piggly Wigglys, Waffle Houses, Dollar Generals, Burger Kings, and Winn-Dixies. And how can I ignore the beauty in a modest birthday party for a young boy at a McDonald’s? The boy is happy; radiant, even. The food even smells good. His obese relatives polish off quarter-pounders with cheese and super-sized fries and Cokes. They are glowing. This is precious too.

Everywhere I go, I see signs, omens. Not far off the Hank Williams Lost Highway in Montgomery, Alabama — just past Rosa Parks Avenue, home to check-cashing offices and low-slung fried-chicken shacks — sits a brightly decorated VW van with the slogan: “Love God as much as you love yourself. Love others with all your heart.”

At a gas station I overhear a young man talking about how he and his wife have turned their lives around. “We are going to credit counseling, and I changed shifts at Outback. God is with us in all things. Thanks to Him, we are going to make it.”

I fill the gas tank next to a carload of perky coeds in halters and cutoffs heading down to Panama City, Florida. Their stereo blares the U2 song “It’s a Beautiful Day.”

We are on the verge of war, and it really is a beautiful day.

In southern Alabama, the church parking lots overflow onto the highway. Vans packed with parishioners stop at shotgun houses to pick up more. The after-church crowd packs Cracker Barrel. The special is fried something. Everyone is dressed to the nines. Convoys of camouflage military trucks out of Fort Rucker pass by on the highway. Fresh American-flag pennants waggle from car windows. A clerk in Walgreens asks if I want a free flag decal with my purchase. Flustered, I reply, “No, I have lots of flags,” which I don’t.

In a motel room in Perry, Florida (population seven thousand) I drink my favorite Mexican beer and absently page through the phone book. Under “churches” there are seventy listings in all, including Spring Warrior Church of Christ, New Jerusalem Primitive Baptist, and New Beginnings Deliverance Center. I want to call each one and ask if the end really is near, or if this is just another false alarm.

I surf the television channels hoping for a Seinfeld rerun. Instead I land on a public-access broadcast of a local Baptist service. The preacher reads from Revelations 21: “Then I saw a new heaven and a new earth. . . . And God shall wipe away every tear . . . and death shall be no more, neither shall there be mourning nor crying nor pain anymore.”

How can I not look forward to that?

But he continues: “As for the cowardly, the faithless, the polluted; as for the murderers, fornicators, sorcerers, idolaters, and all liars, their lot shall be in the lake that burns with fire and brimstone, which is second death.”

Doesn’t this list cover all of us? I turn to CNN, where President Bush gives Saddam Hussein forty-eight hours to disarm, or else.

In Homosassa Springs, Florida, a woman in a print dress stands alone on the highway, holding a sign with a picture of a cross on a hill. She makes eye contact with me and points to the words on the sign: “His pain, your gain.”

A few miles later, a sign with one word: “Faith.” Then another: “To see God in everything makes life the greatest adventure there is.”

“Huge 21,000-Pound Bomb Tested In Florida,” shouts a newspaper headline. The bomb — 40 percent heavier than the air force’s fifteen-thousand-pound BLU-82, or “daisy-cutter” — is named MOAB for “Massive Ordnance Air Blast,” or, unofficially, “Mother of All Bombs.” The paper says that during the test, windows rattled, the ground shook, and some residents in the area reported seeing a white mushroom cloud. A local sheriff’s deputy said it was “the sound of freedom.” A Best Western hotel clerk said, “It was kind of weak.” Maybe so. I was just a hundred miles away, and I never felt a thing.

The forty-eight-hour deadline winds down. Saddam won’t disarm. The United Nations wants to give him more time. The French are against us. A restaurant in South Carolina renames its French fries “liberty fries.” Business soars.

The parrot’s question haunts me. Who am I? Maybe those church folks in Dyersburg have it right: The end is near. Time to get my life in order. Say my many apologies, finally finish Moby-Dick, lose that ten pounds. Or go the other way: Patronize strip clubs, read comics, consume slabs of raw beef, smoke unfiltered Camels. Forget all this jogging and dietary fiber. Stop feeling guilty. Making this second list brings instant relief.

I’m ready for end time. As I write, I look out at the gulf from a tiny fishing key on the central coast of Florida. I drink my third cup of coffee and watch the shrimp fleet motor out to open water. Everything I see from my limited earthly perspective is brilliant. Two manatees float into the cove like a royal wedding procession. Turtles shine like hubcaps on partially submerged logs. Arrow-sharp garfish pierce the riparian shadows: now you see them; now you don’t. Brown pelicans swoop overhead like . . . well, stealth fighters. On a nearby coastal river, hundreds of black vultures cluster in cypress trees to await the next death. For the moment, at least, I’m ready.

And it seems the center will not hold much longer. After traveling thirteen hundred miles, I arrive in Fort Myers Beach to a red-tide warning. Strewn on the sand are thousands of dead stingrays, sharks, catfish, and other species I can’t identify. The beach stinks. Men shovel carcasses into trash barrels and then rake the sand. Overhead, military transports and black helicopters prowl low, along with Piper Cubs trailing banners that read, “Welcome spring breakers.” A tangle of plastic traps an osprey’s talons so that it can’t gain elevation. Jimmy Buffet songs drift from every beach-side bar. We are wasting away in Margaritaville. Fish are dying. We are about to go to war. And it’s our own damn fault.

A local newscaster gives the wrong six numbers in the weekly lottery drawing. She apologizes, recites the correct numbers, and adds, “I hope I have just been the bearer of good news, instead of costing someone a million dollars.” Her co-anchor chimes in, “Uh, that’s $50 million. Next, the weekend weather.”

I fill in my picks for the NCAA basketball tournament and passively watch the buildup to war. I learn about “shock and awe” while advancing Notre Dame past Illinois to the Sweet Sixteen. March Madness is underway. Kentucky will win it all, one analyst predicts. A retired general boasts that the war with Iraq will be over in days.

War is inevitable. In each hotel lobby, Fox News and CNN blare alerts from “embedded” (sounds like “in bed with”) reporters. I ask a clerk, “Is the war over yet?” She makes a sour face. “We should just bomb them and leave.”

Isn’t that what we’re going to do?

Before the war officially begins — before we lob thirty cruise missiles into Saddam’s Baghdad palace in a “decapitation move” — I dutifully jog past the dead fish on the sand and listen to sound bites from my fellow Americans:

“This red tide is ruining my vacation.”

“He lives in palaces while his own people starve.”

“What time is the early-bird special?”

Finally the big day arrives. Time to rock-and-roll. Saddam will not budge an inch, nor will the French, Germans, or Russians. The Turks won’t let us come in from the north. Antiwar demonstrations escalate. Former president Jimmy Carter takes out a full-page newspaper ad pleading with President Bush to give the weapons inspectors more time.

In the evening, when the forty-eight-hour deadline expires, and just before the basketball tournament resumes, the president addresses the nation. Rather than watch, I decide to go swimming. The pool is empty. The gulf air is soft; the sunset, breathtaking. I float on my back and look up at the Florida timeshare where I am staying. In every window, above the same entertainment center, on the same twenty-one-inch color television, is an image of the president looking down at me. He is no doubt preparing listeners for war: for the casualties, the sacrifices, the twenty-four-hour, round-the-clock analyses on television and radio. His lips move, but I can’t hear a word. I turn over and see my president’s stern face reflected in the water. When I skim my arms across the surface of the pool, the image breaks up into hundreds of pieces. When I stop moving, his face comes back together. The hour grows late. The leader of the free world begins to fade into the night, replaced by a carpet of stars and circling satellites.