The days are getting longer. I’m getting older. Last night, in yoga class, I felt challenged by the simplest postures. Sweat poured off me, hitting the mat like fat drops of rain. Afterward, at the natural-foods store, I couldn’t help but notice a woman who looked as if she might have just come from yoga, too. But instead of staring dumbly at the rows of produce, she was humming softly, breezing through the aisles, yoga pants flapping like wings. She smiled at me. I smiled back, then turned away. No, I wasn’t about to invite her into a daydream with a married man too exhausted even to strike up a conversation — contorting his lips to form vowels, consonants, mispronouncing every other one.

I don’t stay faithful to Norma because I think she’s necessarily more adorable or more worthy of love than anyone else. I stay faithful because we took a vow to discover what unconditional love really means. As Joseph Campbell wrote, “Marriage is not a love affair. A love affair has to do with immediate personal satisfaction. Marriage is an ordeal; it means yielding, time and again. That’s why it’s a sacrament; you give up your personal simplicity to participate in a relationship. And when you’re giving, you’re not giving to the other person; you’re giving to the relationship.”

A friend confided to Norma and me last night that she loved her partner but wasn’t sure she wanted to continue living with him. Wasn’t it normal, she asked, to sometimes have doubts? Norma jumped right in. “Of course,” she replied. “Everyone does.” Everyone? I thought. “Sometimes I daydream about living alone,” Norma went on, “in a place like Antarctica.” Antarctica? My adoring wife, who shivers when the temperature drops below fifty, fantasizes about a life without me in the coldest place on earth? No wonder I went to bed and dreamt I was in love with another woman. In a hotel room, shutters closed against the heat, we embraced in the fading light of a summer’s day. In Africa.

Words shuffle into my writing room, complaining that I’ve woken them too early. I remind them that I just work here, that I don’t like it any better than they do. They don’t believe me. They know that I’m the one who unlocks their cells. I’m the one who wields the club but leaves no marks — no ugly bruises to mar the sentences they’ll form by the time I’m done with them. Stop grumbling, I tell them. Save it for when we try to describe the indescribable so as to make a grown man weep.

In college I was a political-science major who never took a creative-writing class. I went to graduate school to study journalism not because I wanted to be a writer but because I wanted to change the world. I didn’t even start to write poetry or keep a journal until I was in my midtwenties. That’s when I saw the earth breathe, and discovered that everything was alive, and realized that if I wanted to report the biggest story of all — to describe not just the facts but the truth — I’d need to learn how to use a living, breathing language. Even after all these years, though, I’m hardly confident of my craft. And let’s face it: my inner critic is not my biggest fan. Each time I start a new essay, I have to remind myself I don’t write an essay by writing an essay. I write by putting down sentence after sentence, good sentences and bad sentences, handsome sentences and homely sentences. If the words are alive, my paragraphs don’t need to show up wearing expensive suits and ties of Italian silk. Sometimes it helps to remember the poet William Stafford’s advice: “If you don’t like what you’re writing, lower your standards.”

Just before my sixtieth birthday, I was talking with a friend about the way we use language to deny the most obvious fact about old people: that they’re old. Trying to hide one’s age behind such euphemisms as “senior” or “the young old,” I said, is like calling the death of civilians “collateral damage” or a used car “pre-owned.” What’s wrong with old — a simple word, honest and unadorned, that’s stood the test of time? Elders might get more respect in this country, I said, if they respected the language a little more. My friend, in his midsixties, saw it differently. A gifted poet who respects the language no less than I, he smiled and said he still calls himself “middle-aged.” I paused, unsure how to get out of this tight parking space. “If sixty-five isn’t old,” I asked, “what is?” He shrugged and said, “Seventy?” I told my friend I’d happily call him middle-aged if that’s what he wanted. For myself, though, I’d be afraid of pulling a tendon if I stretched the adjective that far.

When Katsushika Hokusai, one of Japan’s best-known artists, turned seventy-three, he said that he’d learned “a little” about painting. Just before he died at eighty-nine, he said that he might have become “a real painter” if heaven had given him ten more years.

What right do I have to be here this morning? None. No right at all. Yet here I am. All the more reason not to take for granted my mysterious life on this mysterious planet. My first cup of coffee. My next breath. Norma is still asleep upstairs, although who knows where her dream self has wandered: a thousand miles from here, a thousand years. She was twenty-six when I fell in love with her — that is, with her dancer’s body, with her long black hair. O shallow man. It wasn’t until the first time I saw her cry that I fell in love with her. Now she’s about to turn fifty. There are fewer tears. I’m still in love. And here come the birds: always on time; always on key; always jubilant. At least, that’s how they sound to me. And what about the thousand shades of green outside the window? This world would be hard to believe if you’d never seen it. 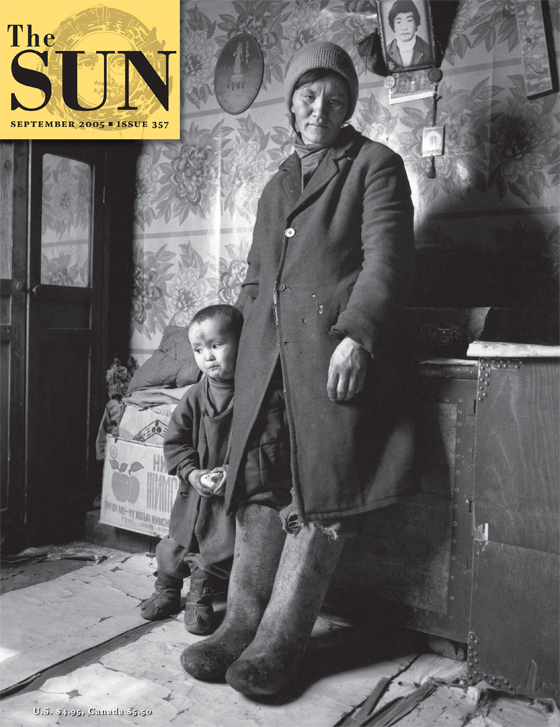 By John Tait
The Sun Interview