Maybe I need to join a twelve-step program for people who can’t stop trying to improve themselves. Once I start setting goals — for eating less, for running more, for reading all the unread submissions and answering all the unanswered mail — I just keep going until my list is as grandiose as George W. Bush’s plans to remake the Middle East.

The house the Founders built is still standing, but there are cracks in the foundation, broken windows everywhere, and no more room to stack the dead. Let’s face it: the house wasn’t designed to accommodate hundreds of thousands of dead Iraqis and millions of dead Vietnamese, not to mention the ghosts of all the Native Americans and enslaved Africans who haunt the upstairs halls. I hear that plans are underway for a new wing with early-American accents, surrounded by a charming stone wall topped with stainless-steel razor wire that glints in the noonday sun.

Carlo Petrini, the Italian journalist who inspired the slow-food movement, said recently that he was dismayed by the grimness of his comrades on the Left. “Those who suffer for others do more damage to humanity than those who enjoy themselves,” Petrini suggested. “Pleasure is a way of being at one with yourself and others.” Well, slow food may be the best way to defend the planet’s biological and cultural diversity, but not if I’m the one waiting to be served. Our meal last night was delicious, and it couldn’t have been more authentic: the elderly Italian couple who ran the small, make-everything-from-scratch restaurant looked as if they’d been cooking — and bickering with each other — since the beginning of time. But after waiting nearly an hour for our food to arrive, all I could think was that I was grateful I hadn’t ordered the risotto, which, our waiter had advised us, would have taken a little longer.

I was thinking about God when I went walking in the woods this morning. I was thinking that God probably doesn’t care that I can’t define Him. Or Her. Or It. Maybe to God all my words are like the leaves that drift to earth this time of year. Does it matter to God which way the wind blows the leaves or in which direction they point when they hit the ground? Does it matter to God how many poets have written odes to autumn? Does God keep track of the poems? Of the leaves? I stopped thinking about God when I saw a deer in a clearing. Our eyes met. Then I took another step, and the deer leapt away.

A reader related this story: While driving to work one day, she heard her Aunt Clara, who’d been dead for twenty-five years, tell her to hit the brakes. A moment later, a truck ran a stoplight and barreled through the intersection she’d been approaching. She pulled over to the side of the road, shaken and amazed. To her aunt, she said, “Talk to me.” Her aunt replied, “I’m not here for your distraction.”

God arrives in a sleek Italian sports car with doors that open like wings. Go ahead, God says, tossing me the keys. Take it for a spin. But where could I go in a car like that? Strangers would stare. Friends would shake their heads and think I’d sold out. Sorry, I tell God. That’s not the car for me.

So many ways to say the name of God. So many arguments about which wine goes with which pronunciation.

Norma and I are passengers on the Titanic. One of our cats is in the cabin with us; the other is lost somewhere below deck. I search everywhere but can’t find her. When I awake from my dream to find both cats curled up beside me, I’m overjoyed. Then I close my eyes, fall back to sleep, and find myself once again in our snug little cabin on the safest ship in the world. Norma looks frightened. I ask what’s wrong. She says she’s just had a terrifying premonition: the ship will hit an iceberg, bury its nose beneath the waves, and sink. But that’s impossible, I assure her.

Am I ready to surrender — or do I need to crunch the numbers again? Just what is it about this world of illusion I still need to understand? The writer Satish Kumar tells of a man being chased by a wild elephant. The man climbs a tree and gets hold of a branch, but the elephant grabs the tree with his trunk and starts to shake it. Then, suddenly, the man is attacked by bees from a hive just above his head. But even as he’s being stung, a few drops of honey trickle into his mouth, and the honey is deliciously sweet. He’s savoring the taste when an angel flies by. The angel asks the man if he wants to be rescued. “Yes,” the man says, “but can you wait until I get this next drop of honey? It’s coming. See it coming? Just wait. . . .” The angel flies away. The man shouts after the angel, “But it’s coming. Wait. I’ll go with you after this drop.”

Not much happened yesterday. The sun set in the west after rising in the east. Job took it on the chin, as always. Narcissus, absorbed in his reflection, didn’t move an inch. 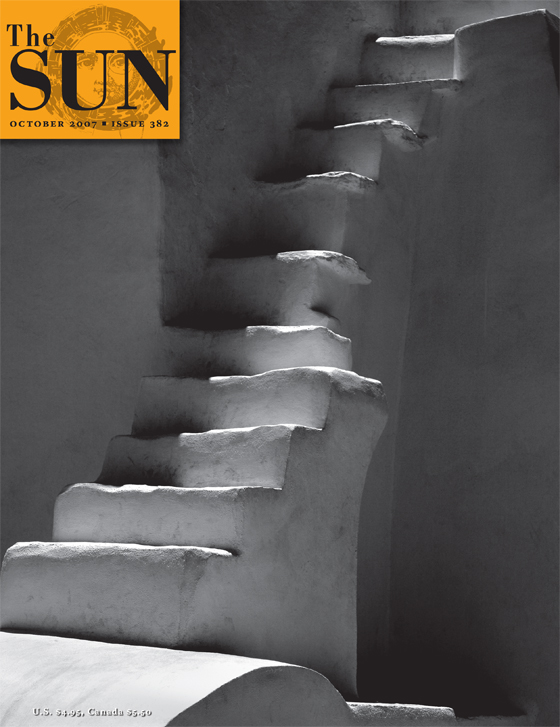 Song Of The Swordsmith