Yesterday I picked up a 1992 issue of The Sun. According to the masthead, four people worked with me in the office. The magazine had fourteen thousand subscribers then. Bill Clinton was running for president; so was Sparrow. Today The Sun has nearly seventy thousand subscribers. Eleven talented, dedicated staff members work beside me, and seven more work from home. That’s eighteen in all: two baseball teams. Two teams, one manager — and perhaps not much of a manager at that. But I’ve always been ambivalent about being a “boss” or seeing myself as a “leader.” MBA students with their eyes on the corner office take courses in leadership. I gravitate to Plato’s model: the best leader is someone who isn’t interested in the job.

In 1992 I spent more time talking with my colleagues than I do now. No one was out of the loop. Had someone suggested that one day we’d use “e-mail” to communicate with one another, I’d have laughed. There were no formal job descriptions; we just had work to do, and we did it. Did people sometimes feel dissatisfied or unappreciated? Of course. It wasn’t some golden age, but it was a different age. For me, personally, was it more agreeable? That’s hard to say. Back then I reminisced about the 1970s, when The Sun had fewer than a thousand subscribers and a staff of part-time volunteers.

I try to rise to the challenge of running an organization, just as I once accepted the necessity of collating and stapling every issue, then selling them on the street. If I want to publish a magazine that speaks the truth about the human condition; if I want it to be independent and original, passionate and free of artifice — well, then I need to do the work without complaint and without seeking refuge in some glorified ideal of the “literary life.” Back then it meant doing the work with a handful of people; today it means managing a staff of eighteen.

I imagine getting together for coffee with the Sy of the nineties and the Sy of the seventies. They’d have plenty of questions, I’m sure. Who knows what kind of answers they’d want to hear? During a lull in the conversation, they’d peer at the wrinkles on my face as if studying a road map of the journey ahead. Then one of us would apologize for needing to get back to work, and the others would laugh: that’s what they were thinking too.

Last night I dreamt that my dead mother told me she and I were “still married” but “haven’t had sex in many years.” Is there any hope for me, Dr. Freud? Being married to a psychiatrist hasn’t seemed to help, nor have hundreds of hours of psychotherapy. This morning, when I sat down to write, my dead father pulled up a chair beside me; he wanted to remind me I might not have what it takes to be a real writer. And I wonder which of my dead ancestors I’ll be channeling at the staff meeting today, and why I worry that some staff members only pretend to like me. Tell me, little grasshopper: What is the sound of losing what you never had? And isn’t it futile, little grasshopper, to imagine that an office full of happy, loving colleagues will ever make the house you grew up in into a happy, loving home?

Rather than sit down to write at 5 a.m., I went online to get the weather report and fell into a massive black hole. Nearly half an hour went by before I escaped. So now I know not to expect freezing rain this morning. I also know some discouraging facts about the nation’s deficit, the unexpected shake-up at Harper’s magazine, the immense fortune bequeathed to charity by an eccentric Chinese billionaire called “Little Sweetie” — but I digress. Had I simply gotten up and opened the window, I could have determined on my own that it wasn’t raining. Had I bundled up and stepped outside, I could have breathed in the chill morning air and listened to the sighing wind, to the creaking trees, to the faintest whisper of the clouds rearranging themselves as they swept across the sky. I could have stood there shivering, waiting for the sun to rise. That’s the big news every morning, though it never makes the Times. 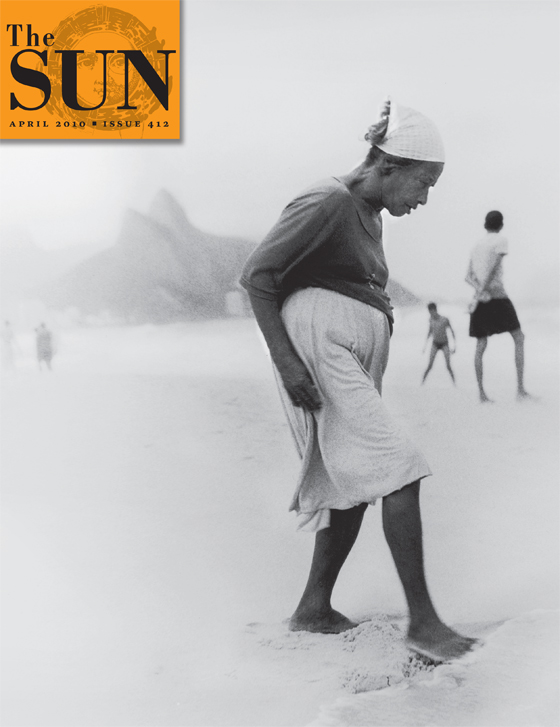 By Genie Zeiger
The Sun Interview