When I was twenty years old, I studied literature by day and drove a limousine by night, ushering businessmen in crisp suits and shiny black shoes to the doors of fancy California hotels and restaurants. While I drove, I eavesdropped on conversations that might as well have been in a foreign language. Their world seemed impossibly removed from mine, where I turned up the volume on Bob Dylan, tried unsuccessfully to cook tofu, and paid the rent late every other month. When my father called and asked about my “career path,” I twirled the phone cord around my fingers in silence. I couldn’t figure out how to make money and still feel fully alive.

One day at a local cafe I picked up a well-worn magazine someone had left behind and began to read. Long after I’d cleaned my plate and paid my bill, I was still engrossed. The writing I’d found in most glossy magazines was as airbrushed as the photos, and literary magazines had always seemed cold and overly intellectual to me. But the essays, stories, interviews, and poems in The Sun were inhabited by real, vibrant people with rich, messy lives. The writers’ honesty struck me as both humble and daring. The photos drew me in as well, intriguing me with their fresh perspectives.

When I moved to North Carolina to attend graduate school in journalism, I wrote a letter to the founder and editor of my new favorite magazine, volunteering my services. Shortly after mailing it, I heard a kind, gravelly voice on my answering machine: it was Sy Safransky, inviting me to stop by his office. That’s how I came to work at The Sun.

Early on, I returned from a magazine conference bursting with proven strategies to double The Sun’s readership and budget: Slash introductory rates! Offer upbeat content! Plaster the cover with bright, bold text! When I presented my ideas to Sy, he patiently explained that the best way to secure The Sun’s future was to publish an outstanding magazine every single month. Without gimmicks. It’s a tall order: to put out issue after issue that startles people awake and helps them see the world a little differently; to respect readers enough to spare them any glibness, condescension, or cynicism; to trust their capacity to handle difficult or surprising truths. That’s what Sy set out to do on day one — and thirty-seven years later, he hasn’t wavered.

But publishing is risky business these days. Printing and mailing costs are rising even as the economic downturn drives subscribers and advertisers away — a combination that has sunk magazines big and small. The Sun’s unorthodox, ad-free approach has helped it weather the storm, but we haven’t escaped unscathed. Two years ago we lost 10 percent of our subscribers, and we haven’t fully recovered. We’re working hard to find new readers, but getting the magazine onto newsstands is more difficult than ever: most independent bookstores have gone under, and now the large chains that replaced them are foundering as well. If a behemoth like Borders can fail in this economy, what keeps this humble, slender magazine afloat?

The answer is simple: people do. The Sun’s unlikely endurance cannot be explained by marketing plans or fundraising strategies, and its value cannot be itemized in a spreadsheet. The magazine’s biggest assets are the individuals who come together in its pages: writers who wrestle words into art; photographers who capture hauntingly beautiful images; readers who receive each issue with an open heart and mind; colleagues who take pride in their work; and donors who understand that this independent, ad-free magazine could never make it without their support.

Ever since Sy started The Sun with a fifty-dollar loan, reader donations have been critical to its success. Sometimes contributions have narrowly saved the magazine from bankruptcy. Other times they’ve enabled us to pay writers and photographers more and to provide free subscriptions to prisons and libraries. This year your tax-deductible donation to The Sun will help us offset rising costs without compromising quality.

When I was a student, I admired those who brazenly flouted conformity, but now I wonder if the more radical act is to believe against all odds in an idealistic dream — and then to work diligently toward it, day after day, even when that routine looks suspiciously similar to a job. Every weekday morning Sy stops at my desk, shifting the weight of the overstuffed bag of manuscripts hanging from his shoulder. He smiles and asks how I’m doing before climbing the creaky stairs to his office. What a difference it makes to pay attention to those around us, to allow ourselves to be vulnerable, and to trust in what we all have in common.

The Sun is the only magazine I know that honors not the life we wish for but the life we actually have, with all its heartache, mystery, and splendor. Please help keep The Sun alive.

P.S.: You can donate online at www.thesunmagazine.org. You can also send your check to The Sun, 107 North Roberson Street, Chapel Hill, NC 27516. Your donation is tax-deductible, and we’ll send a receipt for your records. 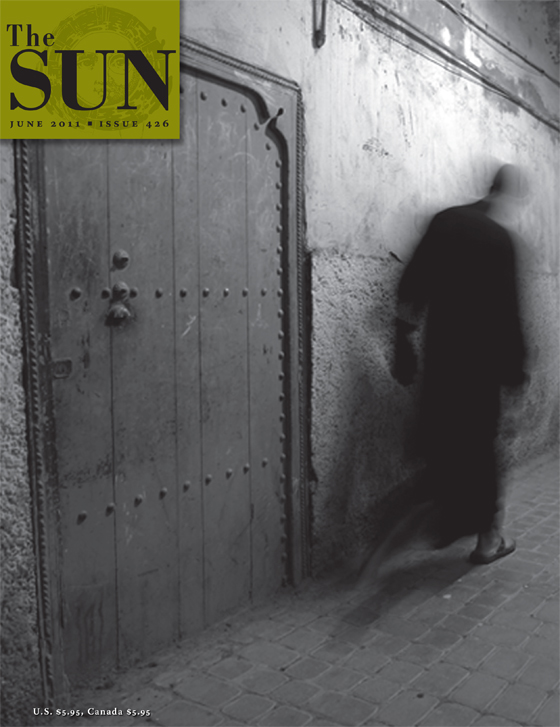